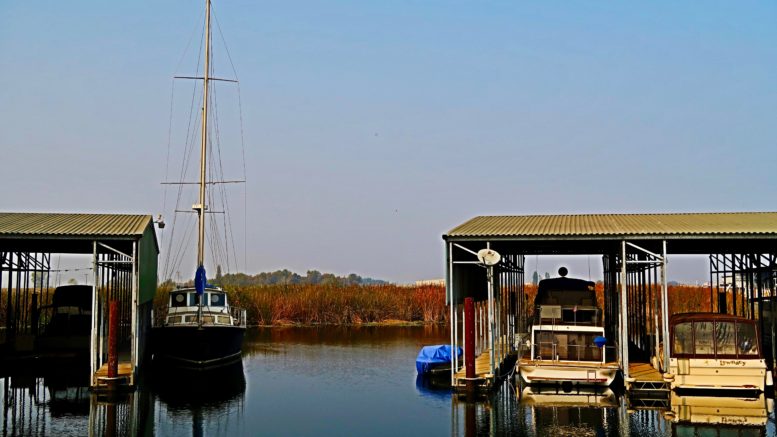 Carlos Tovar died in the Delta on June 23, not far from the Tiki Lagoon. Photo by Scott Thomas Anderson.

A question has haunted towns and marinas along the Delta for five months:What happened on June 23 in the waters near Empire Cut?

It started like most warm Saturdays in the estuary. Carlos Tovar, 41, was steering his runabout motorboat down a channel that carved through the sweeping farmlands. His friends and family were along for the ride. Around noon, Tovar was pulling a water-skier by the weedy edge of McDonald Island. The skier’s rope snagged on the boat’s propeller as it approached a tropical-themed landing called the Tiki Lagoon. Tovar’s friends watched him stop and climb into the water to untangle the line.

Then he went under.

Friends saw his hand splash up, desperately beating against the side of the boat. They realized he was fighting to come up for air, but was suspended in place. Several people struggled to pull him above the waves but couldn’t. An off-duty firefighter fishing nearby rushed over. It was no use.

There are now two ongoing investigations into how and why Tovar drowned. One is being led by the San Joaquin County Sheriff’s Department’s boating division. The other is headed by San Francisco attorney Doug Saeltzer on behalf of Tovar’s family.

This week, Saeltzer said that a recently completed autopsy report confirmed Tovar’s leg was sucked into the siphon of a gravity-fed water intake. The inadvertent trap was lurking about four feet below the channel’s surface. Saeltzer said the intake pipe belonged to a land trust for a nearby dairy operation. Pressing a civil action, Saeltzer had the entire intake removed and examined by an engineer and hydrologist.

“I can tell you the outside diameter of the pipe is 12-and-a-half inches,” Saeltzer said. “And we now know there wasn’t a grate or cover on the pipe.”

Saeltzer said he also discovered that a welding company performed some type of maintenance work on the intake in 2011. Without having obtained that company’s records yet, Saeltzer acknowledged there are still unanswered questions. But the attorney was clear about one thing.

“The expert analysis I got is that it’s somewhat startling how much suction there is on these gravity-fed pipes,” he said grimly.

The hundreds of siphons and intakes spread along the Delta’s farms are supposed to have safety screens. Tovar’s accident was a wake-up call about what can happen if they malfunction, but it also coincided with the revelation that engineers designing three, 1,000-foot-long intakes for Gov. Jerry Brown’s proposed twin tunnels did not consider boater safety when calibrating the conveyance system.

That unwelcome news, along with multiple experts recently testifying that the tunnels’ construction might collapse local levees, has people from Clarksburg to Walnut Grove more worried than ever.

Brown has only weeks left in office, but the Department of Water Resources and Metropolitan Water District of Southern California remain determined to build his twin tunnels. While scientists continue to debate whether the project—called California WaterFix—will harm the Delta’s fragile ecology, local farmers and business owners insist its decade-long construction will permanently shutter their historic towns. Lately, new concerns have risen around Brown’s $19 billion legacy project.

In August, it was revealed that WaterFix’s 40-foot, 35-mile-long underground tunnels will plow directly through the path of at least 27 known gas wells in the Delta. That’s a proposition independent geotechnical engineers and scientists have called dangerous (read “Fire down below,” News, August 2, 2018). Now, questions are mounting about the trio of colossal intakes that will suck water into those tunnels.

On September 7, DWR was mandated to provide its administrative record for WaterFix to the Delta Stewardship Council, a state-sanctioned government body that monitors the Delta’s health. Buried in the reams of paper was a technical memorandum from DWR’s engineers working on its Delta Habitat Conservation and Conveyance Program, responsible for much of the design work on the tunnels’ intakes. The memorandum acknowledges that when the intakes were designed, “risk of vessel collision was eliminated from consideration because of the difficulty of accurately estimating the risk level among intake options.”

DWR’s current plans put the massive intakes on the east side of the Sacramento River between Hood and Courtland. Local marina owners stress that every summer that section of the Delta has thousands of people boating, jet skiing, water-skiing and fishing on it.

Deirdre Des Jardins, a hydrologist and NASA-trained expert on computer modeling, said she’s reviewed more than a hundred design documents for the tunnels’ intakes. She thinks the fact that boater safety was exempted from DWR’s calculations has to be viewed in context of related questions about the intakes’ design.

“They have some two-dimensional modeling that showed a very low-sweeping velocity past the intakes, which means they really have problems with potentially sucking up fish, and that’s without any of the pumps operating,” Des Jardins said. “In terms of a public safety analysis [for people in the water], that just hasn’t been looked at in any way.”

So far, state authorities are not backing down from their assessment that the tunnels’ intakes have a sound configuration. Sergio Valles is interim chief engineer for the Delta Conveyance Design and Construction Authority, an agency Brown recently created to move DWR’s WaterFix specifications to completion. Valles told his board members and the public on November 15 that there are no major issues to worry about the tunnels’ modeling.

“We did enough to determine the maximum impacts around the preliminary design,” Valles said.

Those words are of little comfort to Delta locals like Karen Medders, who regularly boats with her family near the planned location for the intakes.

“The department of boating and waterways is not working in conjunction with DWR to do what’s in the best interest of the Delta,” the Walnut Grove resident said. “And that includes the safety of people who recreate.”

Even before the latest questions arose, DWR’s plans for the tunnels faced withering criticism from experts at recent state hearings. Most of that testimony focused on the ways the project could degrade and compromise the Delta’s levee system.

Chris Neudeck, an engineer who works for reclamation districts in the Delta and specializes in levees, testified that DWR’s intention to put some 230 individual truck trips per-day on top of the aging earthen barriers—for 14 years—is a recipe for a levee breach.

“A well-known fact is that if you haul loaded trucks on levees over an extended period of time the subgrade and foundation of a significant portion of those levees will consolidate and settle,” Nuedeck testified, adding that this would be “a substantial impact from a critical flood protection perspective.”

Dr. Clyde Tom Williams, a geologist who has consulted on tunnel projects across the globe, reviewed DWR’s environmental impact report for WaterFix. He testified that the department had done inadequate soil and leakage analyses.

Josef Tootle, a geotechnical engineer who was among the experts raising alarms about tunneling through gas wells, also weighed in about levee threats during the hearings.

“There can be little assurance that the ambitious tunneling activities at critical locations, such as under levees, will not result in serious injury to the integrity of the Delta’s complex levee system and other infrastructure essential to public safety,” Tootle testified.

Last week, the extent to which DWR didn’t fully analyze the tunnels’ impacts caused Brown’s project to receive perhaps its biggest blow yet. On November 15, the Delta Stewardship Council’s staff officially recommended its members find the twin tunnels inconsistent with the Delta Plan, a legislative mandate that must be met to make the tunnels a reality. The staff’s decision was based on its finding that DWR did not use the best available science on future sea level rise, as well as a finding that it lacked remedies for the noise, traffic and the destruction of historic resources the tunnels will cause in the Delta.

Kenneth Bogdan, senior legal counsel for DWR, appeared before the stewardship council to defend the tunnels’ planning and design work.

“We should note that DWR and WaterFix is consistent with [the U.S. National Oceanic and Atmospheric Administration’s] recommendations for design work on the project,” Bogdan said. “DWR has adopted 50 mitigation measures to address various land use conflicts.”

Not long after, the stewardship council heard from Des Jardins, who testified about flaws in DWR’s computer modeling and then raised yet another safety concern, this time about no public health analysis being conducted on the toxic Chromium 6 that might be released from sediment that the tunnels will bore through.

By the end of the hearing, Delta Stewardship Council Chair Randy Fiorini told Bogdan and other DWR officials they should not be trying to move the tunnels forward as currently designed.

“Political expediency is not the goal here for such an important project,” Fiorini said.

Be the first to comment on "Threat below the surface: Intake-related drowning in the Delta coincides with revelation about tunnels’ safety planning"