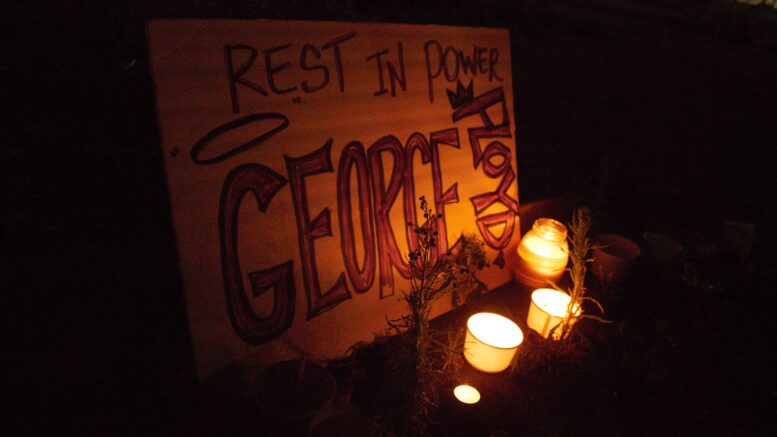 A candlelight vigil for George Floyd on May 27 started days of protests and marches in Sacramento. (Photo by Kevin Gomez Jr.)

Essay: Words are not enough to heal what’s wrong with our communities and law enforcement

A young black Jewish couple in my congregation take a Shabbat walk in their neighborhood and stand in front of a home for a few minutes admiring the flowers in the garden.

The homeowner comes out and anxiously asks, “Can I help you?”

Thinking they would become acquainted with a new neighbor, the couple begins walking toward the man to continue the conversation. He nervously retreats back into his home.

The couple told me that when the neighbor came out of his house, his hand was clutching something that looked like a gun. The husband instinctively knew that he and his wife had to be as “non-threatening” as possible and walk back towards their home. They feared they could have been shot and killed.

This gut-wrenching true story brought tears to my eyes. I think about all the black Jewish families in my congregation and community. Not only are they and their children targets of racism, they have the distinction of being Jewish. With the rise of anti-Semitism in this country, they face discrimination because of the color of their skin and their religious beliefs.

Since the killing of George Floyd, every organization has condemned the police brutality that has become too commonplace in our country. Rabbis and clergy of various religious faiths have delivered sermons.

But words alone are not going to repair the frayed tapestry of the fabric in our society. We thought that the coronavirus was the pandemic. But clearly, the pandemic is institutional racism and xenophobia that has infected our communities and particularly our law enforcement agencies. Anyone watching the video of Floyd gasping for breath while that Minneapolis police officer held his knee on Floyd’s neck -has to be shaken by this egregious act of inhumanity.

“We thought that the coronavirus was the pandemic. But clearly, the pandemic is institutional racism and xenophobia that has infected our communities and particularly our law enforcement agencies.”

A family in my congregation shared an 18-minute video made by Trevor Noah, host of “The Daily Show.” I watched it and was disturbed by Noah’s heartfelt, but truthful, words about the domino effect that the news cycle has had on altercations between police and unarmed African Americans.

“I saw so many people online saying, ‘These riots are disgusting, this is not how a society should be run, you do not loot and you do not burn, this is not how our society is built,’” Noah said. “But what is society? When you boil it down, society is a contract we sign as human beings amongst each other. Amongst this group of us, we agree in common rules, common ideals, and common practices that are going to define us as a group.”

The social contract Noah refers to was propagated by John Locke, Thomas Hobbes and others during the Age of Enlightenment. The theory relates to the legitimacy of the moral authority of the state over the individual. It means that we elect government officials who use their authority to protect our rights and to insure that our society is one in which all citizens have equal justice before the law. And when those in power break that social contract, when there is a breakdown of that moral authority, it damages the bonds of social responsibility and undermines the rule of law.

The police officer charged with murdering George Floyd and the officers who watched Floyd die also broke that social contract.

A social contract and moral authority are not exclusive to law enforcement officers, clergy of all faiths or elected officials. Moral authority is and should be expected of every citizen. Those of us who are white and privileged—whether we are Jews, Christians, Muslims, adherents of other religious faiths, atheists or agnostics—we are also responsible for the social contract.

Until the day a black family can walk down the street, admire the architecture of a building or someone’s garden and never have to fear for their lives, we will continue to deteriorate as a society.

We can be better. We must be better. Our very existence as a nation depends upon it.

Be the first to comment on "Racism infects America"