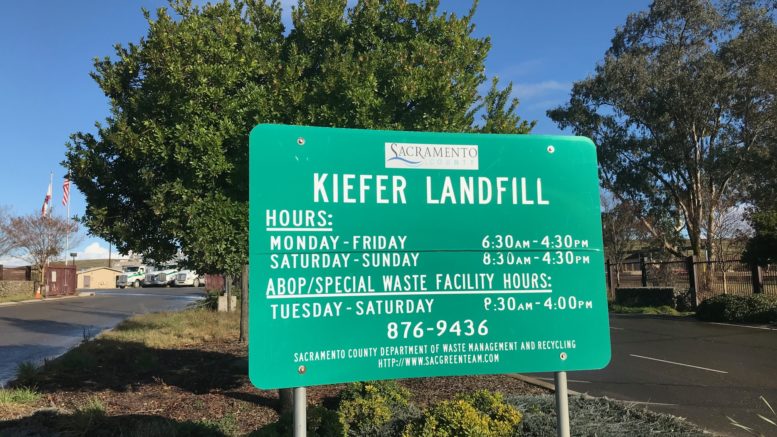 Most of the city of Sacramento’s garbage ends up in Kiefer Landfill in Sloughhouse. (Photo by Foon Rhee)

Sacramento City Council members gave residents a break, lopping off the final two years of a garbage rate hike. But those higher bills may still happen, depending on two efforts that are far from slam dunks.

One is to get out from what some council members concede is a terrible deal with the city’s garbage hauler. But to end that contract 10 years early in 2022, the city would have to cough up $22.5 million—money the solid waste operation doesn’t have.

The second is to save money by making the garbage operation—and the rest of city government—more efficient. But the same consultant did a similar study in 2010, and the city didn’t follow through completely.

The tipping fees contract has an ugly history.

In 2010, the City Council approved an amended 20-year contract with BLT Enterprises that took full effect in February 2012. At the time, supporters highlighted the environmental benefits of no longer trucking the city’s garbage over the Sierra to a landfill in Nevada, but dumping it closer to home at Sacramento County’s Kiefer Landfill in Sloughhouse.

Some critics warned that the deal stunk. Eye on Sacramento claimed that BLT Enterprises cashed in after secret negotiations and that Waste Management’s willingness to pay $70 million clearly indicated the tipping fee contract was overpriced. In 2012, the Sacramento County Grand Jury, a citizens oversight group, issued a report questioning the contract.

If the city gets out of the deal and lands a lower bid, that could help keep rate hikes for residents in check.

So would figuring out how to collect garbage, recyclables and yard waste for less. Mayor Darrell Steinberg is a strong supporter of the new efficiency study, saying that with the trash rate increases, the cost of new employee union contracts and neighborhood investments with the new Measure U sales tax, the city must prove to taxpayers that it is running a lean operation.

City Auditor Jorge Oseguera says the study will include 20 options for cost savings or revenue enhancements across city government. “Everything was on the table,” he told me.

In scope, it’s similar to the study completed in 2010, just after the recession forced painful budget cuts. The same consultant, Management Partners, recommended 49 proposals, including between $101 million and $154 million a year in cost saving suggestions.

Among them: put the city’s solid waste service out to competitive bid (that didn’t happen with the 2010 contract extension) and to phase out “loose collection” of yard waste (in-the-street service was reduced, but the “Claw” returns leaf season).

The council is scheduled to receive the study in the first quarter of 2020. That’s just in time for 2020-21 budget decisions, but some of the cost-cutting ideas could be very politically unpopular indeed.

Be the first to comment on "Editor’s note: Tipping point"