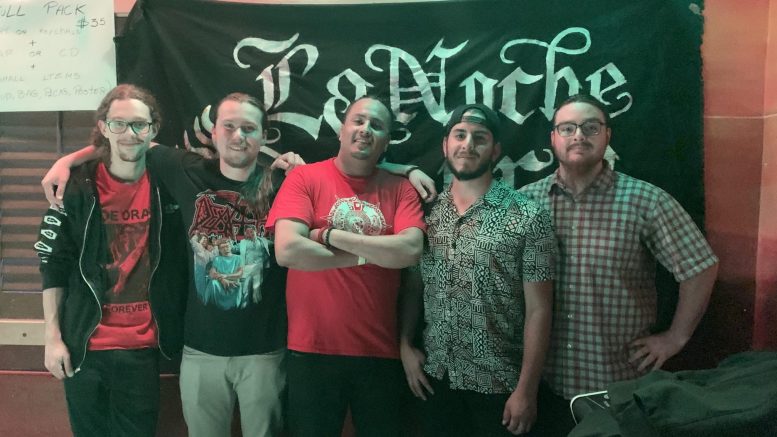 La Noche Oskura released its latest single, "Cruise," in May and continues to write new material for an upcoming album. (Photo courtesy of La Noche Oskura)

Twelve years ago, Nando Estrada introduced Sacramento to La Noche Oskura, a ska band with Latin, punk and reggae influences. The gig was at The Refuge, a longtime, now-defunct venue in Midtown, and the crowd took to the band’s punchy horn lines and Estrada’s lively stage presence singing fluently in English and Spanish. That night, La Noche Oskura’s music evoked circle pits to slow, swaying movements in the crowd. This was something special.

The Sacramento band’s music carries messages of empowerment, racial equality and the struggles in pursuit of the American dream. Since that night, La Noche Oskura has shared its point of view alongside ska and reggae giants The English Beat and The Aggrolites while performing extensively throughout the Sacramento region and Bay Area. For La Noche Oskura, which means “the dark night” in Spanish, the message behind the music remains the same during times of nationwide protest and a global pandemic.

“Our music is inspired by love, the struggles one faces every day and the movements of resistance from all over the world that call for justice and peace,” Estrada says. “I think it’s still extremely relevant as far as the American dream goes. In the past, we compared the dark night to when someone’s crossing the border and trying to get their family here. I’m creating a way and a space for folks that have fought for us and are continuing to fight for us.”

The band fluctuates between six to eight members depending on live gigs, with Domenic Dalpez on sax, Jesse Morales on guitar and vocals, Paul Olson on bass, Christian Kelleher on drums, Nick Helldorfer on trumpet and Alden Denny on trombone, with Estrada front and center on lead vocals.

Before the stay-at-home order, La Noche Oskura was busy writing new songs for its upcoming album when progress stopped. Still, the guys continue to flesh out ideas individually, constantly email each other new material and often Zoom to keep their connection strong.

“Even though we live in this technological age where we can send something really fast, there’s nothing that beats just being able to play with someone and get feedback right away there in person,” says saxophonist Dalpez. “Me being a horn player, and Nick as well, coming up with horn lines is a big portion of the songs that we compose.”

On May 15, La Noche Oskura released a new single, “Cruise,” on social media. With lyrics written by Morales, it’s a slow-paced jam with hip-swaying melodies, buoyant horns and steady percussion led by Estrada’s mix between singing and rapping lyrics.

“The very first songs that I wrote had a lot to do with the lack of representation and feeling alienated and the need for empowerment and equity,” Estrada says. “It’s sad that it’s just as relevant now as it was 12 years ago. On the new album, we’re continuing to talk about similar things because these are things that are continuing to happen.”

The release date for La Noche Oskura’s new, full-length album is unclear. But for a band who is just as diverse in culture as it is in genre, they all agree that they represent something much more powerful together on stage playing music with a strong Latin backbone.

“Moving forward, I think it’s extremely powerful for them to see folks like me and Jay, but I think it’s even more powerful to see Dom and Christian and Nick and Paul also playing alongside of us, and being there for us, because literally that’s the most clear image of solidarity,” Estrada says. “We understand that we’re all in this together.”

Be the first to comment on "Writing through the chaos"