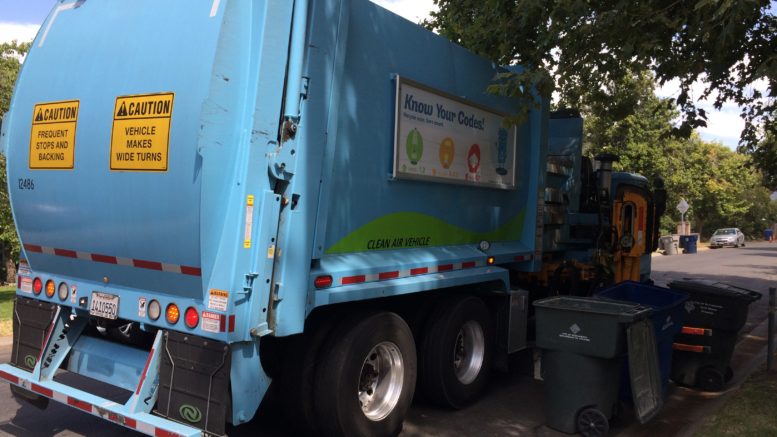 A truck collects yard waste in the Woodlake neighborhood. (Photo by Foon Rhee)

We tend to take garbage collection for granted, except when a pickup is missed—or when our bill goes up.

So at the public hearing on Aug. 28 before the Utilities Rate Advisory Commission, chances are that more than a few Sacramento taxpayers will complain, loudly, about yet another potential increase in solid waste fees.

The city says the new rates are needed to help pay for increases in labor, fuel, vehicle and other operating expenses; higher costs and a shrinking market for recyclables; and the price of starting residential food waste collection. A city survey in March found the vast majority of residents satisfied with their overall garbage service, but 44% rated street sweeping as fair or poor.

That’s all fine, but city leaders need to take the long view—and it’s not pretty.

If approved, it would be the third round of solid waste fee increases since 2010, on top of two rounds of water and sewer rate hikes that started in 2012 and 2016.

All told, if these rate hikes go through, the average homeowner’s bill for basic services—water, sewer, wastewater, garbage, yard waste, recycling and street cleaning—would jump from $115 a month in 2012 to $193 in 2022.

That’s $940 more a year, far higher than the inflation rate.

If that isn’t enough, the city is on track to seek voter approval in 2021 to raise storm drainage fees. The amount isn’t set, but when the city floated this idea in 2015, it was $3.61 more a month over four years for the most common-sized single-family home.

Also, starting in 2021—as a state law kicks in that requires food waste to be collected—there will be a new fee for the 11,000 of 129,000 residential customers who don’t pay for yard waste service because they live in condos or townhomes that don’t have yards or get service from homeowner associations. It will start at $8.74 a month and rise to $9.19 in 2022.

Yes, you can blame the higher rates on stricter state laws, plus on fixing infrastructure that went neglected for far too long.

Yet, you have to ask: At what point do these rate hikes become too heavy a burden on homeowners, especially those on fixed incomes?

Any increase “hits hard” at seniors and the disabled, many already scrounging to pay for medicine and gas, said Carl Burton, past executive director of the Sacramento Taxpayers Association and a member of the California Senior Legislature.

“They always vote to increase taxes or fees regardless of how it may hurt seniors and the disabled community,” he said in an email.

At the same time, rising rents are also hitting families and undermining the city’s push for economic justice.

There is a payment assistance program that started in 2013. Poorer families can save as much as $31.78 a month on their utility bills, depending which services they receive. About 7,750 customers take advantage, according to the city. That’s up from 1,700 in 2016, thanks to more outreach.

But that means more than 120,000 customers are still paying the full tab. And it’s not just nickels and dimes anymore.

1 Comment on "Editor’s note: Nickel and dimed to death?"