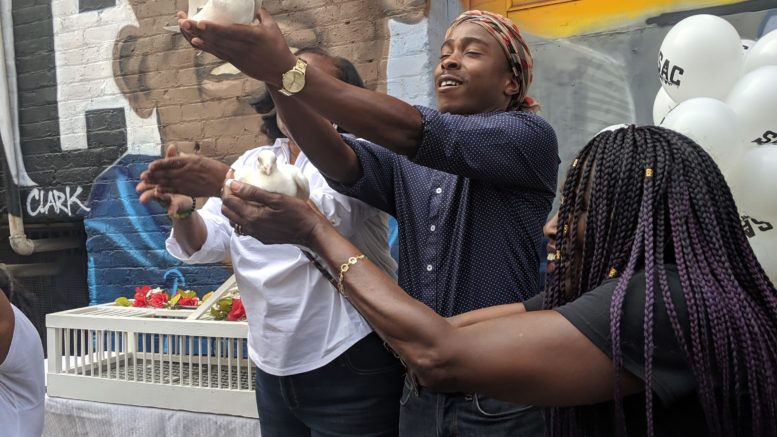 On Aug. 10, family and community members remembered Stephon Clark on what would have been his 24th birthday. His brother Stevante Clark, grandmother Sequita Thompson and others released doves in his honor. (Photo by Kate Gonzales)

Family of police shooting victim—whose initials are ‘SAC’—points to changes in Sacramento since his death, including a new use-of-force law

In a Midtown alley packed with murals, one is dedicated to the life and memory of Stephon Alonzo Clark. His brother Stevante and others like to point out that his initials spell “SAC.”

Stephon Clark would have turned 24 on Aug. 10. Instead, a few feet from Clark’s portrait in Improv Alley, family and community members described their vision for a better Sacramento. There was cake and a balloon release, but it wasn’t a party.

Clark was 22 when he died in March 2018, after police shot him in his grandmother’s backyard in Meadowview. His killing put Sacramento in the national spotlight.

Since Clark’s death, there have been a number of social, political and legal developments connected to the immediate issue of deadly police force and the broader effects of neighborhood disinvestment.

Last December, Stevante Clark announced he would run against Mayor Darrell Steinberg in 2020. He has since told SN&R that he decided against a run for mayor. In April, he was appointed to an advisory committee that will help decide how the city will spend Measure U funds. On Stephon’s birthday, several speakers mentioned the need for South Sacramento to share in that distribution.

Two of them want to be elected the area’s next representative on the City Council.

Pastor Les Simmons and Sacramento NAACP President Betty Williams are running for the District 8 council seat being vacated by Larry Carr, and spoke at the remembrance, part of “I Am SAC Day,” which the Clark family hopes to make an annual event. Sacramento For Black Lives founder Sonia Lewis said little has changed in the neighborhood in three decades, aside from the addition of the Pannell Meadowview Community Center and the Meadowview light-rail station.

Simmons, the senior pastor at South Sacramento Christian Center and a board member with Sacramento Area Congregations Together, said recent protests and other grassroots efforts will help change how the city prioritizes the needs of South Sacramento residents.

This past March, demonstrations were organized in East Sacramento after Sacramento County District Attorney Anne Marie Schubert announced her office wouldn’t file charges against the officers who shot Clark. Simmons was one of 84 people arrested during those demonstrations.

Schubert did not file charges against any of the people. In May, attorney Mark Merin filed a civil rights lawsuit in federal court, citing arrest without probable cause, physical injuries suffered during the arrests and plaintiffs being denied access to bathrooms.

To reduce police killings of unarmed suspects, Democratic Assembly members Kevin McCarty of Sacramento and Shirley Weber of San Diego authored Assembly Bill 392. The bill would update existing law to make the circumstances under which officers are permitted to use deadly force less ambiguous and more limited.

Current law states that an officer can use deadly force when pursuing a suspect who has committed a felony and is trying to flee. The bill would permit deadly force “when the officer reasonably believes … that deadly force is necessary to defend against an imminent threat of death or serious bodily injury to the officer or to another person.”

Both the state Senate and Assembly approved the bill, which was signed by Gov. Gavin Newsom on Monday.

But, he added, “Slow progress is better than no progress.”

What belongs in Sacramento’s 2020 time capsule?

Be the first to comment on "Happy birthday, Stephon Clark"