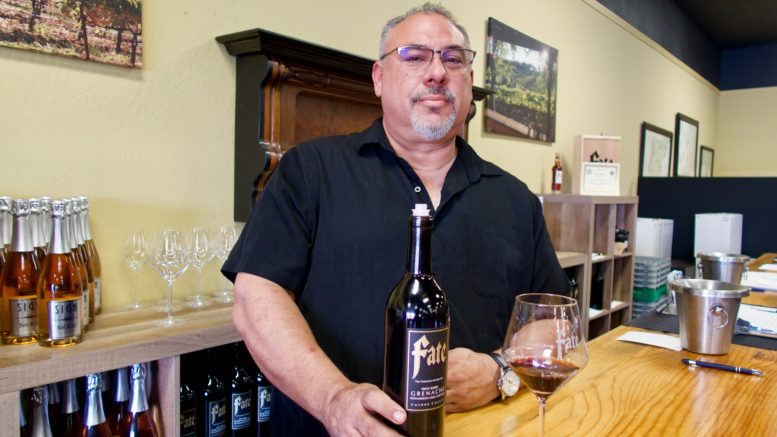 Winemaker Thomas Allan pours from his Fate label at his tasting bar inside the Amador 360 Collective in Plymouth. (Photo by Scott Thomas Anderson)

A decade ago, Thomas Allan began evolving from one kind of wine guide to another.

He had been an expert sommelier, one of those extensively trained, pallet-perfected stewards who can be the highlight of a tasting room. The best sommeliers go deep into description as they lead guests through nuanced flavor profiles and help them pair the ideal wine with meals, events and special moments.

These days, Allan is still pouring for people, but now each bottle is from his own tasting bar—and he’s the one shepherding that ancient link between barrels and what’s born from soil and sunlight. Lately, Allan’s Fate Wines is grabbing attention for making Amador County sangovese shine in a region that’s mainly known for zinfadels and barbera. Allan has also been proving there’s plenty of advantages to a winemaker coming from the sommelier side of the industry.

Even during the coronavirus lockdown, Fate Wines can be purchased at Amador 360, which is open from 11 a.m. to 5 p.m. daily for wine shipping and pickups.

Allan grew up in Santa Barbara County, where vineyards brushed by sea breezes have yielded a renowned corner of California’s wine country. Over time, those long rows of vines along Dutch-style windmills sparked Allan’s obsession for the valley’s agricultural art. He spent years as a tasting host for Santa Barbara Winery. After that, he worked at Santa Barbara’s Wine Cask, where he helped customers navigate some 2,500 different vino vintages.

“At that point, I started to do some more intensive tasting of wines from around the world,” Allen remembered. “I was learning about wine geography, the high-end producers and just the mystique of it.”

Allan eventually became a wine broker in Santa Barbara as he took courses for full-on immersion. His credentials became hard to match: Allan is a certified sommelier through the Court of Masters, a certified wine professional through the Culinary Institute and a certified specialist through the Society of Wine Educators.

But the more Allan shared his knowledge with wine enthusiasts, the more he wanted to be the person experimenting with fermentation and barrel life. He only had $5,000 on hand to try to make the jump to becoming a winemaker and that was a nonstarter in Santa Barbara. Napa and Sonoma counties were also too pricey. However, over the last 15 years, several other wine trails have come into being in California, a number of them producing award-winning bottles while offering lower price points and cost of doing business.

One of the most popular wine appellations falling into that category is Amador County, where some of Allan’s family already lived.

He moved to the area in 2010 and soon had Fate Wines up and running. Allan says one difference he noticed between Santa Barbara and Amador was how supportive the foothill producers are of each other. As Allan dove head first into fermentation, the vintners and grape farmers around Plymouth were always willing to share their expertise.

“Certainly, I like the small-town part of it,” Allan said. “I like the pace and the overall energy of the whole place. It is really and truly a wine-making community.”

Though his wine-making neighbors had his back, the sommelier quickly learned that handling seasonal crops and controlling acid, sugar and yeast are skills learned through trial and error. Some of Allan’s early batches of wine got poured directly down the drain.

“You know the only requirement to being called a winemaker is that you make wine,” Allan said. “You certainly have to have some passion for it, and some technical background, but it’s really just a question of getting in there and getting your hands dirty.”

Within a few years, Allan was starting make the kind of wines he’d hoped for. It wasn’t what locals were expecting. While Amador County is known for big-tasting, face-slapping red wines that are high on alcohol, Allan started charting a different course. Similar to Amador winemaker Chaim Gur-Arieh of C.G. Di Arie Vineyards, Allan is conjuring lighter, brighter, dinner-hour reds that lean towards the European style. His bottles also tend to have alcohol levels of less than 14%.

The first customer to showcase Fate’s wines was Taste, widely hailed as the best restaurant in Amador, followed by the Amador 360 Collective, Plymouth’s multi-label tasting room for smaller, artisanal winemakers. Amador 360 owner Brian Miller says that Allan’s background as a sommelier gives his wine-making approach certain qualities that stand out in a field crowded with UC Davis-trained vintners.

“This is a big difference and big advantage that Thomas has over most winemakers,” Miller told SN&R. “People come to be winemakers in different ways, but rarely do they start on the food and service side, and with knowledge of the full world of wines. His wines are food-friendly and you can drink a whole glass, or more, without tiring. You can’t say this about a lot of popular wines being sold today. Those are more cocktail wines. But Thomas’ wines have a freshness and friendliness that makes them both wear well in the glass, and go well with meals.”

While Allan has received high marks on his trempranillo, grenache, zinfandel and Brut rosé, it’s his sangiovese that’s pulling ahead of the pack. That speaks to a broader secret about what Amador County is barreling. Media coverage of this serene slice of the Sierra foothills touts the spicy, electric zins it’s producing. When the Amador conversation steers to Italian side, it’s about barbera. But Allan knew Amador’s climate was also producing another stellar standout from Italy.

Now, with Fate’s 2017 sangiovese, Allan’s cases are making the case that Amador could have a third national reputation. His sangiovese is a flourish of boysenberry liquorish reflections with a clean, velvety front and airy array of coco notes swirling on its tail. Putting his sommelier hat on, Allan recommends pairing the sangiovese with classic tomato-based Italian dishes and lightly grilled vegetables

Another Fate offering that is gaining a reputation is its white dessert wine, Elixir. Made from viognier, verdelho and black muscat grapes, this fortified blend boasts a sizzling vanilla gloss over watermelon spices and gentle pings of melted honeycomb. It’s an apéritif that’s made to be sipped like a caramel-drizzled cheesecake.

Two years ago, Miller invited Allan to set up his own mini-tasting room inside Amador 360. Allan’s wines are poured by 360’s staff throughout the week, and he typically pours for customers himself on Saturdays and Sundays between 11 a.m. and 5 p.m. During those moments, the sommelier and the winemaker merge into one—and visitors to the tasting room are all the better off for it.

“Being on the sommelier side of it, the biggest lesson I learned is what the general public enjoys,” Allan said. “That’s why I want my wines to be smooth and drinkable, early. I’m not really making wines that you need to hold onto for 10 years. I feel like that’s double-jeopardy, if you have to spend a lot of money on a bottle of wine, and then you have to wait another decade to drink it. These wines are supposed to be enjoyed. Wine’s supposed to be fun.”

A business tries to survive the lockdown while in mourning

Uncorked potential: Delta wineries are flourishing, though tunnel project could change that

Be the first to comment on "A ‘som’ behind the barrels"