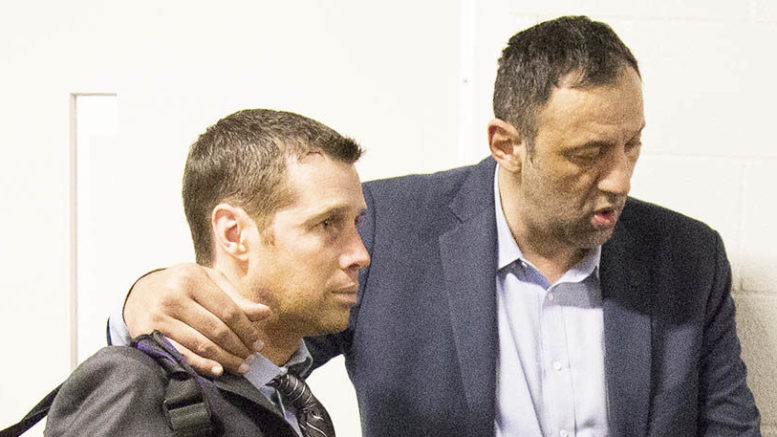 The Kings miss the playoffs and the coach gets fired

For much of the season, the Kings exceeded expectations, played an uptempo, entertaining style with a bouncy, youthful spirit and accelerated the push for the franchise’s first NBA playoff berth since 2005-06.

They were 30-27 at the All-Star break, a mere game out of the eighth and final playoff spot in the Western Conference. The end of the postseason drought was not just a dream, it was a legitimate possibility. Talk of the playoffs began as a whisper, then became a daily topic of conversation at the water cooler, in the bar, at the mall.

Let’s just say, the Kings committed one enormous, unforced turnover. They let it slip away and stumbled into the great collapse that prompted general manager Vlade Divac to replace coach Dave Joerger with Luke Walton, and in a related move, dismiss assistant general manager Brandon Williams.

During those disappointing final weeks, the Kings did the following: Went 9-16, including losing seven of their final 10 games; lost twice to an injury-depleted New Orleans squad, including a ghastly, uninspired home finale that included a blown 14-point lead; and ended the season with an inexplicable loss against a Portland team resting its starters and using only six players.

The kicker—or the kick to the gut for Kings fans—was Joerger’s bizarre decision to sit his starters in Portland after his club scored 74 points in the first half and led by 28. As the deficit narrowed, then disappeared entirely, he stubbornly stuck with his subs and watched the Blazers secure the victory.

“I don’t want one half, or a couple of weeks of basketball that we’ve struggled with, to take that big picture, good feeling away,” Joerger said after what turned out be his final game.

Had the Kings won their final two games, they would have finished with a .500 record (41-41). Yet, somehow, Joerger failed to grasp the emotional significance of finishing strong, of avoiding another losing season, of demonstrating to a long-suffering community that giant strides are in the near future. Whatever his motivation against the Blazers—and one theory suggests this was a one-man protest against the front office—he gave Divac no reason to give him the benefit of the doubt.

“I started thinking about it [coaching change] after the All-Star break, but it was more like the whole year,” Divac, recently signed to a four-year contract extension, told reporters. “It was a good season, better than a lot of people expected. But I still believe we could do better.”

Rarely has a 12-game improvement over the previous season felt like such a downer.

Though not inevitable—if the Kings made the playoffs, Joerger would have likely returned for his fourth season—the coach was undone by more than blown leads and missed opportunities. His refusal to start power forward Marvin Bagley III after the All-Star break perplexed more than the rookie’s relatives. Other coaching decisions rankled: Joerger’s refusal to give rookie Harry Giles substantial playing time; his use of small forward Harrison Barnes at power forward; his reluctance to coach De’Aaron Fox more forcefully, particularly as the second-year point guard’s aggressiveness diminished at both ends during the deciding stretch; and his inability to develop a rapport with his players.

Joerger’s communication issues were never more obvious than during a Feb. 21 game against Golden State. In a scene with brutal optics, an animated Joerger dressed down Buddy Hield in front of the bench seconds after his shooting guard broke the play and instead sank a three-pointer.

The underling tension between Joerger and Williams—rooted in the coach’s belief that the assistant GM wanted him fired over his handling of Bagley and leaked information to the media accordingly—virtually guaranteed that one, if not both, would be dismissed at season’s end. And, to his credit, Divac didn’t apply merely apply Band-aids. He fired both and sent a powerful message: No more drama, no more nonsense, no more unnecessary distractions.

So welcome to Sacramento, Luke Walton, and never mind that you’re three years late. Divac wanted Walton after he fired George Karl, only to see his former teammate sign with the Lakers. This time, the interest was mutual.

“You see what this team has done, and the group of players Vlade has brought in here, and you see the way they play,” Walton said his introductory press conference. “They play fast. They have three-point shooting. They’re young, they’re versatile. That’s how I want to play. That’s how I think the game should be played.”

Noting that the Kings finished third in pace, fourth in three-point shooting percentage, ninth in scoring, but only 21st in overall defense, he added, “We’ll put a huge emphasis on defense, challenging our guys daily, start practicing with defense at the front of the practice plan to prioritize how important it is to us. You have to want to be a good defensive team.”

Walton, 39, leaves a Lakers franchise that obtained LeBron James last summer and promptly morphed from storied to dysfunctional. While former team president Magic Johnson fired himself before he could fire his coach, Walton has been roundly praised for his professionalism and for keeping his team competitive.

Late Monday, however, news broke of a lawsuit accusing Walton of sexually assaulting a woman in 2014 before he became the Lakers coach. His attorney denies the allegations, and the Kings say they are “gathering information.”

If Walton survives the controversy, Divac will turn his attention to off-season player moves, foremost among them deciding how to find an upgrade at center over the wildly inconsistent Willie Cauley-Stein and to entice Barnes into turning his $25.1 million player option into a multi-year deal.

“We have our coach,” said Divac, “and now we move forward.”

Be the first to comment on "One big unforced turnover"