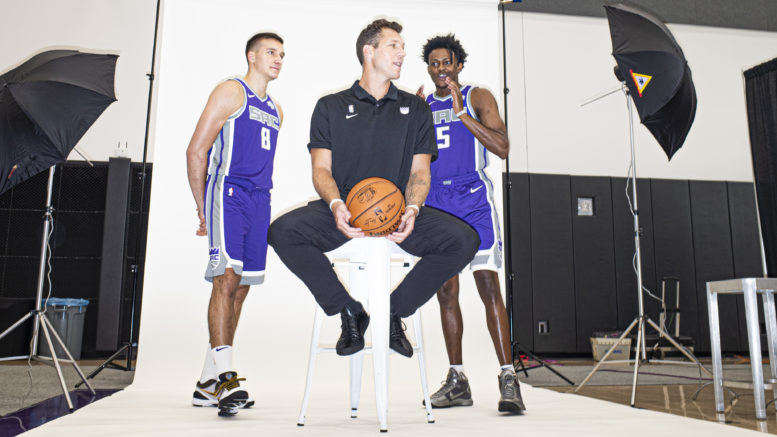 Kings coach Luke Walton, center, poses with guards Bogdan Bogdanovic, left, and De’Aaron Fox during the annual media day on Sept. 27, 2019. Little did they know that the COVID-19 pandemic would cut short the season. (Photo by Karlos Rene Ayala)

Editor’s note: If fans aren’t allowed at Golden 1 Center, will the Sacramento Kings ask City Hall for a lower payment?

Like almost every entertainment business, the Sacramento Kings are getting crunched by the COVID-19 lockdown. And the team’s financial problems also ripple to the city of Sacramento.

The Kings cut the June 30 quarterly lease payment to the city on the Golden 1 Center from $1.625 million to the minimum $40,000 because in March the NBA canceled the rest of the team’s home games, 11 in all.

The team’s lease with the city allows that reduction—and it could happen again if coronavirus forces the NBA to cancel games again in the 2020-21 season.

But the team would have to negotiate a change in the lease to reduce its rent if there are homes games, but there are no fans allowed—or far fewer fans—due to public health rules.

Under the current Sacramento County public health order, professional sports are allowed to operate indoors, but without live audiences. Under the state’s blueprint for reopening businesses, even with the lowest spread of coronavirus, pro sports must limit capacity to 25%, can only sell tickets to fans who live within 120 miles and must deliver food to seats, among other restrictions.

Asked whether the Kings would seek a discount if attendance is limited, a spokesperson said in a statement: “The Kings will continue to fulfill their obligations to the City per the terms of the lease agreement.”

The city treasurer’s office says that the Kings haven’t approached the city about amending the lease.

Based on the NBA’s plan for a 72-game season starting Dec. 22, the city treasurer’s office said this week it’s counting on 36 regular season home games, rather than the usual 41. That alone would reduce the quarterly payment due June 30 to $1.43 million.

Less money from the Kings will only make balancing the budget more difficult for the City Council, especially if there isn’t another federal relief package soon to help make up for lower tax revenues during the lockdown. The city is required to spend its $89.6 million share from the initial COVID-19 relief bill by the end of the year.

Plummeting parking revenues have already caused a shortfall in what the city needs to make its payments on the $273 million in bonds it issued for the Golden 1 Center. (The Kings financed the rest of the arena’s $556 million cost.)

To cover that gap, the city had been using the Golden 1 debt reserve.

UPDATE: But in the mid-year budget update, the council agreed Jan. 26 to use the general fund to cover a $900,000 shortfall in lease payments.

Last August, Councilman Steve Hansen urged the city to negotiate with the Kings to increase their lease payments to help cover the shortfall, pointing out that when the council approved the arena deal in 2014, it was told the general fund would be protected.

City Hall, however, may be in better financial shape than the Kings.

The team furloughed about one-third of its staff in May. Some of those 100 jobs were eventually slashed, then in September it announced more layoffs. Furloughed employees still on the payroll returned to work Nov. 30.

Be the first to comment on "A discount on arena rent?"