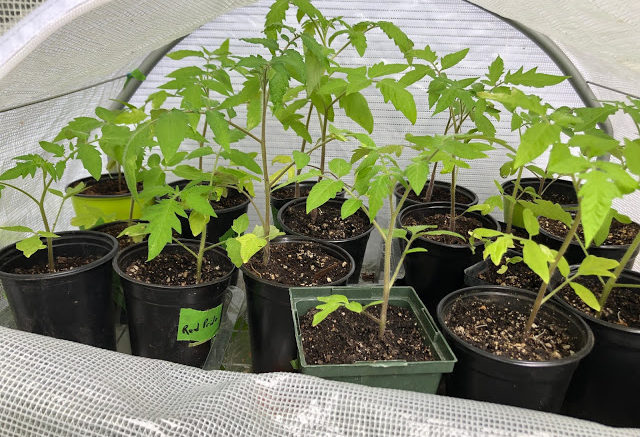 Tomato seedlings, protected from rain and chilly nights, are almost ready to go in the ground. (Photo by Debbie Arrington)

This season in the Big Tomato, our signature crop likely will be a little late.

This has not been an easy spring for tomatoes in Sacramento. Wet, cold weather in March and early April put a damper on growing conditions. Any tomato transplants that went in the ground early just sat there and sulked, their roots shivering.

We may be in store for an unusually cool summer, too; that’s good news for the State Fair, but not necessarily tomato lovers. “Past history is no indicator of future performance,” quipped Sacramento radio host Farmer Fred Hoffman, paraphrasing financial disclaimers.

For Sacramentans who invest time and money in growing tomatoes, this could be a challenging season. Hoffman, a lifetime master gardener, cited Accuweather’s extended forecast with summer temperatures on the cool side, mostly in the 70s with overnight lows just above 50 degrees. By Sacramento standards, that’s chilly—especially if you’re a Brandywine.

On his KFBK and KSTE gardening shows, Hoffman has long promoted April 28 (his birthday) as Sacramento Tomato Planting Day, the perfect time to set out tomato transplants. But in recent years, that planting date was too late for a good harvest or missed lots of warmth in early spring. He was planting his own tomatoes weeks before his birthday.

“This might be the year to actually wait until April 28—or Mother’s Day in mid-May—to plant tomatoes to lessen the chance of hailstorm damage from any passing storms,” Hoffman said.

On his former acreage in Herald, Hoffman used to plant 40 tomato varieties or more in a vast vegetable garden. Now in shady suburban Folsom, he has cut his tomato planting way down.

“Since I am now dealing with limited sunlight in my yard, cherry tomatoes are my favorite right now, especially Sun Gold and Sweet Million,” he said. “(They’re) always dependable, always productive from June through November.”

Pete Frichette, the tomato king of Sacramento’s Greenhaven neighborhood, usually plants his tomato seedlings in March, but not this year. Well-known for his two-pound Aussie tomatoes and abundant harvests, he didn’t even start seed indoors until March 25, six to eight weeks later than recent seasons.

“It seems the excess rain and my older status coupled with the cold spring have kept me ‘out of the ground’ so far this year,” said Frichette, now 80. He estimates that his seedlings will be ready for transplant in two more weeks.

While waiting for the weather to warm, Frichette worked on his soil. As he feared, all the rain washed out some of the necessary nutrients. Besides adding ammonium sulfate, potassium sulfate and other nutrients, he covered the planting area with an inch of compost. He also dug in peat crumbles from an asparagus farm near Stockton. He’ll be planting his usual favorites – Early Girl, Better Boy and Aussie – plus testing two others, Brown Berry and Italian Giant Beefsteak.

As for my own tomatoes, I’m trying 10 varieties this season: Juliet (the only repeat from prior seasons), Big Beef, Big Mama, Brandy Boy, Dark Queen, First Prize, Limmony, Orange Pixie, Painted Lady and Queen of Hearts. One of those has got to like the weather, hot or cold.

Be the first to comment on "Fretting over tomatoes"