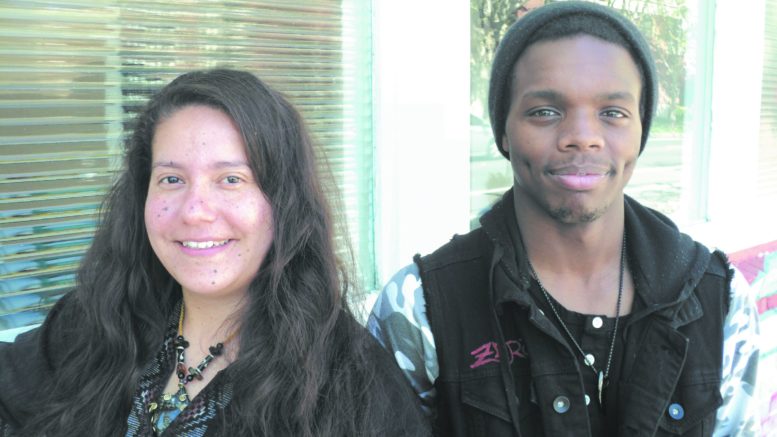 Dea Montelongo and Deveon Smith first connected with Sol Collective as youths looking for a safe space. Now they work there. Photo by Edgar Sanchez

As a troubled high school senior, Deveon Smith wasn’t sure what to expect when he first visited Sol Collective — a Sacramento nonprofit that uses art and activism to provide programs, promote social justice and empower underserved communities. He first entered the arts center in 2016 while seeking an internship that would count toward his high school diploma.

“Growing up in a challenging environment, I was used to hearing ignorance,” Smith, now 20, recalled. “I was used to people spewing hatred.”

“It was strange because of the way they spoke — the unconditional love they had for a human being they had just met,” Smith said.

Sol Collective has been a go-to place for artists, poets, musicians, youth and community activists since it was founded in 2005 by Estella Sanchez. It is supported by the California Endowment as its initiatives create a space for youth of color to express themselves and develop skills in a safe environment.

Various programs at Sol Collective use the arts for community building, empowerment and inspiring the next generation of leaders. Sol Collective also facilitates workshops alongside global and local artists that encourage community organization.

“Since the beginning, Sol Collective has been a safe space for youth to not just learn but to explore and express themselves.”

Smith obtained the internship at Sol Collective, which later became part of his independent study senior project for graduation. After, he stayed on at Sol Collective where he now works as an events coordinator. There, he found role models among the staff, such as Dea Montelongo, Sol Collective’s programs director.

“Since the beginning, Sol Collective has been a safe space for youth to not just learn

but to explore and express themselves through visual arts, music, poetry or civic engagement,” said Montelongo. “We always have youth interns.”

Youth play a large role in shaping Sol Collective’s programs, she said. Like Smith, Montelogno first connected with Sol Collective as a youth and returned to work for it as an adult.

“I had been trying to find a place that I fit in,” said Smith.

To find out how to get involved with the Sol Collective, click “Learn more” below.