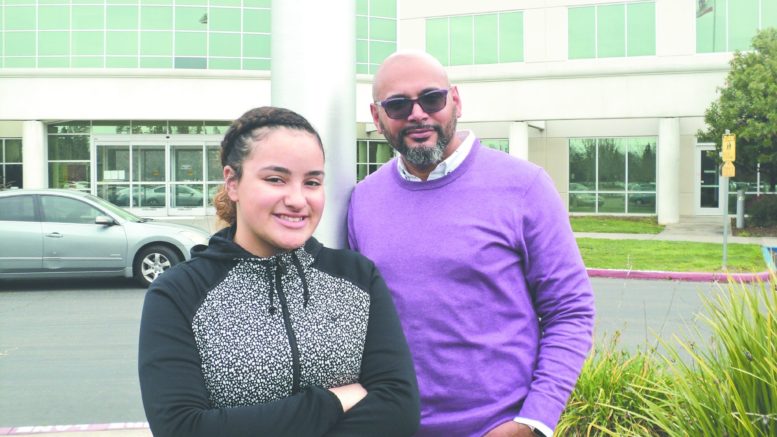 Sacramento High Senior Kiarah Young, left, is a brilliant student with unlimited potential according to Marcus Strother, director of the Men’s and Women’s Leadership Academy. Photo by Edgar Sanchez

A senior at Sacramento Charter High School, Kiarah Young, 17, is excited about her future — she’s been accepted to more than 25 colleges.

A major factor in her development as a student has been her participation in the Women’s Leadership Academy (WLA), which is a subset of the Men’s and Women’s Leadership Academy, a program offered by Sacramento County Unified School District (SCUSD) to steer youth of color across 13 campuses toward success by providing mentors, special classes and other supports. This program, which has a total of 487 students in grades 5-12, works in partnership with the California Endowment’s Building Healthy Communities Initiative.

Although the program first focused on young men and dismantling oppressive policies that may push them on a path toward incarceration, the program has grown to include young women and empowering them as well.

Kiarah arrived at Sacramento Charter High School in August 2015, when WLA was being implemented at other schools in the district. She joined in 2017 when it reached her campus.

“I saw how much the men were benefiting from Men’s Leadership Academy at Sacramento High,” Kiarah said.

Schools that participate in the WLA either have daily classes led by teachers, or weekly meetings led by community members. At Sacramento High, Ericka Burns is a mentor to its WLA students, meeting with them twice weekly during lunch to discuss different subjects including historic African Americans.

“Ms. Burns has taught us a lot we didn’t know,” Kiarah said.

“We will impact other people’s lives, and I feel it will teach us a lot.”

“Kiarah is one of the top three students I have ever dealt with,” said Strother, noting her capabilities go beyond her 3.8 GPA.

She will graduate from Sacramento Charter High School on June 8, 2019. Ten days later, on June 18, she will fly to Peru with nine fellow members of the Men’s and Women’s Leadership Academies. The group will work on a service project in an indigenous community in Oxapampa, on the fringes of the Amazon, and is the first trip for the combined academies.

“I’m excited about the trip,” Kiarah said. “This will be my first time going out of the country. We will impact other people’s lives, and I feel it will teach us a lot.”

Find out how to get involved with the Women’s Leadership Academy by clicking “Learn more” below.

Essay: A candidate worth fighting for