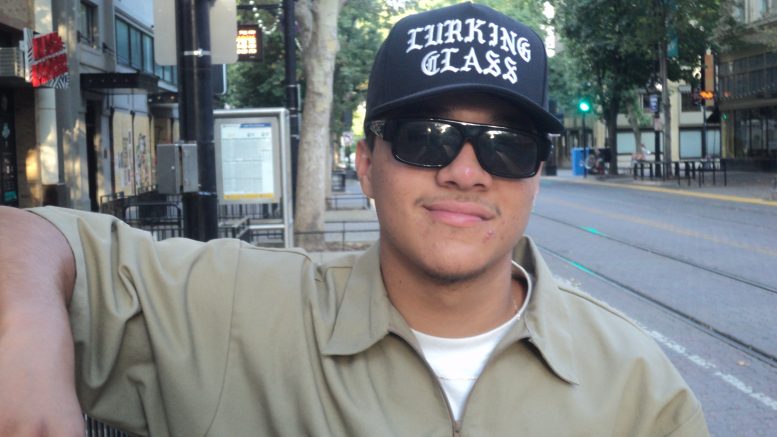 Roger D. Zapata – aka “Chuco” – would like to vote on Nov. 3, for candidates who support Black Lives Matter. But, as things now stand, he won’t be able to cast a ballot until he’s 18 in 2022. Photo by Edgar Sanchez

Three months ago, a Sacramento teen faced a decision: To be or not to be at a local march against police brutality?

A young Chicano, Roger D. Zapata, concluded he had to be at a late May protest organized by Black Lives Matter. The 16-year-old rapper, aka “Chuco,” later attended two other BLM demonstrations in Sacramento, for a total of three.

He believes Latinos’ involvement in these rallies solidified the Black-Brown bond. He recalled that African Americans had defended Latinos when Donald Trump, then running for president, assailed Mexican immigrants as rapists and drug smugglers in 2015.

“When that stuff was happening, the Black culture supported us,” Zapata said recently. “They stood with us when there was nobody there. So it’s only fair that we support them too.”

Like millions of people, Zapata was shocked by the videotaped death of George Floyd while in the custody of Minneapolis police on May 25. As the handcuffed African American lay on the ground, a police officer knelt over Floyd’s neck for nearly nine minutes, without intervention from other officers.

“I felt horrible watching that tape, man,” Zapata said. “That was somebody’s cousin, brother, somebody’s dad. Anything that has to do with stuff like that, I get angry.”

Spurred by that tragedy, along with police murders of other unarmed Blacks nationwide, Zapata joined diverse Sacramentans in marching with BLM, which also seeks judicial/carceral reforms. At one protest, he paired with his mentor Henry Ortiz, a formerly incarcerated activist who co-founded Self-Awareness and Recovery, a program supported by The California Endowment.

“Henry’s taught me” many good things, Zapata said of the 39-year-old, now a law-abiding “community healer.”

For years, classmates thought Zapata was a pachuco – a juvenile gang member – because he dressed like one, down to heavily starched pants and hat. They dubbed him “Chuco,” a diminutive of pachuco.

Zapata, however, is too smart to join a gang. For him, avoiding gangs is best.
After becoming a rapper in 2017, the California native entered a rapping contest. His song, “For All My People,” won a $500 scholarship and placement on YouTube.

More recently, Zapata has traveled to Los Angeles to co-star in a fact-based movie about a gang-banger seeking a gang-free – and better – life. Still in production, Chuco plays Chico in the film, a friend of the tormented gang member.