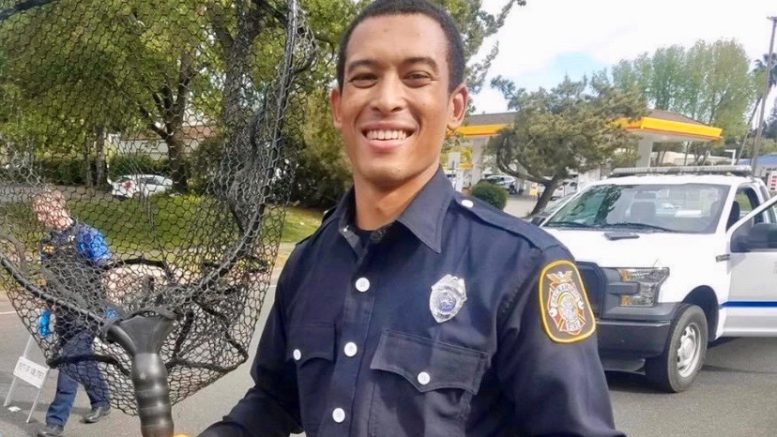 Desmond Lewis, a member of the city of Sacramento Fire Department, resigned on Jan. 31.

Past and present city fire department members say that there’s no accountability for bullying, harassment or racist behavior

Desmond Lewis wanted to be a firefighter since the day he graduated college. He imagined it was a job where people pushed themselves to their physical limits while using camaraderie and teamwork to save lives and protect the community. Raised in the Sacramento region, he had no doubt where he wanted to meet that challenge.

After graduating from the fire academy, Lewis was hired full-time by the city of Sacramento Fire Department. He didn’t just join the ranks of a large force, but also became part of a small cadre of African-American firefighters.

But now, after only two years with the department, Lewis has already taken off his uniform for good. He says that while 90% of the city’s firefighters are good men and women he was proud to work with, the department’s leadership has fostered a culture that allows bad actors to get away with bullying, making racist comments and acting in ways so unprofessional that it creates a toxic environment—one that makes it hard to concentrate on serving the public.

Lewis says the stress got so bad that it started affecting his health. So on Jan. 31, he resigned from what had once been his dream job.

He isn’t alone in his feelings, and it isn’t just the Fire Department with these issues.

Five years ago, a city audit revealed that 72% of the department’s firefighters were white—a number that didn’t reflect Sacramento, where only 46% of the population is white, with 29% Hispanic or Latino, 19% Asian and 13% African-American.

The report prompted the City Council to mandate that the Fire Department improve its recruitment practices and work towards building a department that better represents one of the most diverse cities in the nation.

Jaymes Butler, a 26-year veteran of department and its only Black captain, says that when he joined a quarter of a century ago, it had 50 Black firefighters. Today, after Lewis’s resignation, it has 14, out of a total of 580 firefighters.

Butler and other current and former department members told SN&R they believe Lewis is being honest and forthright about what he experienced, as well as the apparent lack of disciplinary action around it. Butler says he’s not surprised that Lewis resigned.

Lewis grew up in Elk Grove. After graduating from UC Davis in 2017 with a degree in community development, he set his sights on the firefighters’ academy. He volunteered with Sacramento Fire for more than a year before getting hired in March 2020. Then came the year of the COVID-19 pandemic and protests against police violence.

Lewis says that on June 21—Father’s Day—he was working mandatory overtime at Station 11 on Florin Road in the Pocket neighborhood when a fire engineer started talking to him about the Black Lives Matter movement. At first, Lewis recalls, he tried to appreciate that the engineer wanted to know his perspective. But as the conversation went on, Lewis says he got more and more uncomfortable. Then, the engineer made a comment that caught him off guard.

“He asked me, ‘Do you see yourself as a Black man or as a firefighter?’” Lewis remembers. “That’s when the conversation started rubbing me the wrong way. It felt like he was trying to gauge where my loyalties were … He ended the conversation by saying, ‘It’s been great talking, but if I have any advice for you, it’s don’t congregate with just your own.’”

“I didn’t even know what to say,” Lewis says.

He grew up in a predominantly white neighborhood and didn’t think he was overly sensitive to awkward conversations. But for him, the encounter with the engineer was vexing. He tried to put it out of his mind. Then, one night in mid-summer, he was sitting at the dinner table at Station 10 at the corner of Fruitridge Road and 65th Street in South Sacramento. All the firefighters were watching television news coverage of the George Floyd protests. Lewis says that a captain at the table looked up at the TV and blurted, “Can’t these people stop protesting and just go back to shooting each other.”

“In my head, I thought, ‘There’s no way I just heard that,’” Lewis says. “I looked around, and everyone at the table was just going about their business, and I was clearly the only one offended. No one made eye contact with me. There was no acknowledgment.”

Lewis says he started thinking about how that captain was supervising firefighters and life-saving missions in a part of the city with so many Black residents. Then other Black firefighters began to tell him about troubling behavior they’d observed in the department. Lewis was told that the previous year a firefighter was caught on video referring to a large Black patient having a diabetic episode as “a big boy”—a term with a long history as a racial slur. Then, a fellow Black member of the department told Lewis that he’d overheard a different captain use a strange variation of the N-word when referring to children. A female member of the department told him that she’d overheard a firefighter use the full-on N-word on a call.

While Lewis says these reports were deeply troubling, so, too, were less obvious comments he heard himself. Lewis says that on multiple occasions he heard fellow firefighters refer to South Sacramento as “a shithole.” Lewis’s mother and father are both longtime school teachers in the neighborhood and Lewis worried the remarks had racial undertones. If nothing else, he says, he thought they were highly disrespectful to the community the department serves.

Lewis acknowledges he started having feelings of resentment and bitterness when he came to work. For Lewis, the final straw came in early August when he and a group of firefighters at Station 10 were watching a major league baseball game. When a BLM flag was draped across home plate, Lewis says a fellow firefighter said, “They probably don’t even believe in that shit.”

Lewis says he wasn’t sure who to turn to about his concerns. He describes a culture in the department that pressures firefighters not to report others for bad behavior. Worse yet, he says, it’s well known that some supervisors prefer handling reported problems with verbal warnings and “ass-chewings” rather than formal disciplinary action. Finally, Lewis says, there’s no clear direction from leadership for younger and less experienced firefighters on how to handle problems.

“I didn’t even know who our HR rep was,” Lewis said. “I found that out when I resigned.”

SN&R spoke to several current and former members of the department—who were granted anonymity to protect their careers—who shared their own stories of witnessing alleged bulling, harassment and discrimination that went unaddressed by leadership.

This week, Sacramento Fire Department spokesman Keith Wade told SN&R that Chief Gary Loesch had met with Lewis to discuss what he’d been through.

“The experiences shared were cause for concern,” Wade said via email. “The Chief requested the City’s Equal Employment Opportunity officer to investigate the statements shared by the employee. These investigations are ongoing.”

“All members of the Sacramento Fire Department are required to adhere to the regulations set forth by federal and state law that precludes discrimination, harassment, and retaliation in employment,” Wade added. “These standards also reflect the department’s core values of fairness and accountability. Every instance of misconduct is thoroughly investigated, and the culpable personnel held accountable.”

A report to nowhere

After the 2016 audit, the fire department formed a Diversity Advisory Board to come up with a plan to “recruit, hire and train qualified new employees who were reflective of the diverse community.” Butler, who out of frustration began introducing himself to city management and City Council members as the only Black fire captain, volunteered to serve as its co-chairman.

After research, fact-finding and analysis, the board made six major recommendations to the department’s leadership: create a community outreach strategy to identify important stakeholders and increase cultural awareness of the department’s role; create student and youth programs to develop relationships in underserved communities; create career pathway partnerships with local colleges and institutions; create a fire reservist program; and put an increased focus on best practices for retaining firefighters from different backgrounds.

Butler says the department ignored half the recommendations and made half-hearted or temporary efforts at the others.

“We put together this comprehensive report and all it did was find the round file. Nothing happened,” he says. “We did a lot of hard work, but a plan without funding is just a plan.”

Butler said that he’s since had to go out to college campuses and job fairs armed with only fliers and a notebook, while the Sacramento Police Department shows up at the same events with elaborate booths and flashy banners and advertisements—and at least two officers assigned full-time to recruiting. Butler found the contrast so irritating that eventually made his own presentation, on his own laptop, on his own time.

One Black member of the department told SN&R that they believe the police department is having more success in building a diverse force. (As of July 2020, the police ranks were 65% white, 15% Hispanic, 9% Asian and 5% Black.)

“Well, I would hope so, given how much resources they’re dedicating to it compared to us,” Butler says.

The captain added, “You can say you want to do something, but there’s an old expression that goes, “You show me your budget, and I’ll show you your priorities.’”

In the fire department’s response to SN&R, Wade pointed out that the department had created a partnership with the Government Alliance on Race and Equity, participated in the city’s Race and Gender Equity Action Plan and hosted what he described as “two successful youth academies.” He said it was also collaborating with La Familia, Asian Resources Inc. and the Greater Sacramento Urban League on youth recruitment.

Butler says that over years he has heard racist comments while on the job, but in the past they were promptly addressed. He says he does not think anyone would make those statements around him now because he’s a captain, but he attributes the comments that Lewis and other members of the department heard, at least in part, to recruitment failures that have now led to only 2.4% of the department being Black.

“If you get too many people in one spot, this is the culture and atmosphere you’re going to get—especially when there’s so few of us, and there’s only four of us with any kind of seniority or rank,” Butler said.

In addition to Butler, the department has one battalion chief, John Burgess, who is African American.

As for Lewis, he’s in the process of starting a new career. He says the decision to give up firefighting wasn’t easy, and he’s sharing why he left in hopes it will lead to positive changes and a better environment for his friends in the department.

“I just want this to be brought to light, and I want the culture to change,” Lewis said. “If they don’t address this, there’s always going to be a problem.”