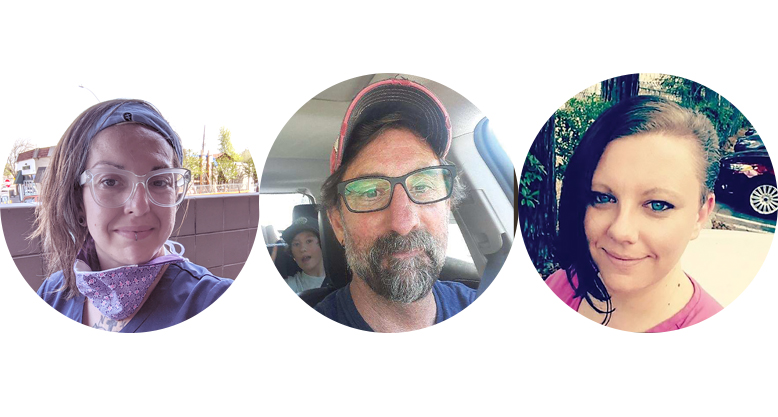 A medic, a teacher and a grocer step up during Sacramento’s time of unrest

The term “essential worker” has carried new meaning during the coronavirus pandemic and is no longer solely reserved for medical professionals. Here are three area helpers in a time of unrest.

Once demonstrations rippled through the country in response to the killing of George Floyd by Minneapolis police, Adrienne Hebb, a licensed vocational nurse, knew it was time to once again step up.

As a street medic, Hebb offers first aid to demonstrators who sustain cuts, bruises and heat exhaustion while marching in Sacramento. She says she hasn’t had to treat anyone who has been pepper-sprayed in the face yet, but is prepared when needed.

“It’s important that we are out there on the frontlines in protests because the sheriffs and the city cops come out with their medics and we’re told ‘Oh yeah, we’re going to help anybody that’s on the street,’” she says. “But that’s not exactly the case.”

Every street medic shows up to a protest with their own bag of medical supplies they often bought with their own money. If a person is hurt, look for someone like Hebb to wear a single red cross, the universal symbol of protection.

“It’s a human rights issue for me,” Hebb says. “Me being a nurse, I have a huge amount of empathy for my fellow man, which in today’s day and age is starting to become more rare.”

Once shelter-in-place orders began back in March, teachers were forced to quickly adapt to a “distance learning” model. For math teacher Phil Brann, not being able to connect with his students in person is something he never imagined in his 20 years of experience.

The transition to online curriculums hasn’t been easy. Out of about 140 students Brann saw on a normal school day teaching 7th and 12th grades at Kit Carson International Academy, he says maybe 95 log on. Still, one positive that Brann is taking from this experience is that he’s learning a new way to teach, something he says is long overdue.

“This is forcing my profession and my institution to enter the 21st century when we’ve still been stuck in the 1950s,” Brann says. “I’m not half the teacher online that I am in the classroom, so I have to do something about that.”

Brann is currently teaching summer school to gain more experience connecting with students in their virtual classroom—a new reality in the future of education.

March 13 is a day that Erin Thomas says she’ll never forget. The bakery department manager at a local grocery store in Granite Bay says it was the first day panicked customers scrambled to buy food and household supplies in bulk.

“At the beginning of quarantine, people were really freaked out. They came in and they wiped our whole store out,” Thomas recalls. “Keeping customers happy when we don’t have what they needed was very difficult.”

The store responded by doubling the number of e-cart employees who went from starting work at 6 a.m. to 2 a.m. because more than 40 orders needed to be fulfilled by noon. Thomas says Christmas Eve is one of the store’s busiest days. The store recorded several weeks of holiday-like numbers during the quarantine, marking the busiest period ever experienced, Thomas says.

“I absolutely view my job as essential now,” she says. “We saw the best and the worst of people during that time.”

Since the protests began, the store has been closing two hours early with barricades to prevent vandalism. But Thomas sees the demonstrations as crucial and thinks there’s a lesson in this moment.

“Everybody’s under way more stress right now than normal and we’re all people—we’re all humans,” Thomas says. “I’m hoping that this is going to be a wake-up call for a lot of people. We are at the beginning of a possible revolution here and I think that being kind to one another is the best way that we can get through it.”

Dinner (and a movie) at a distance