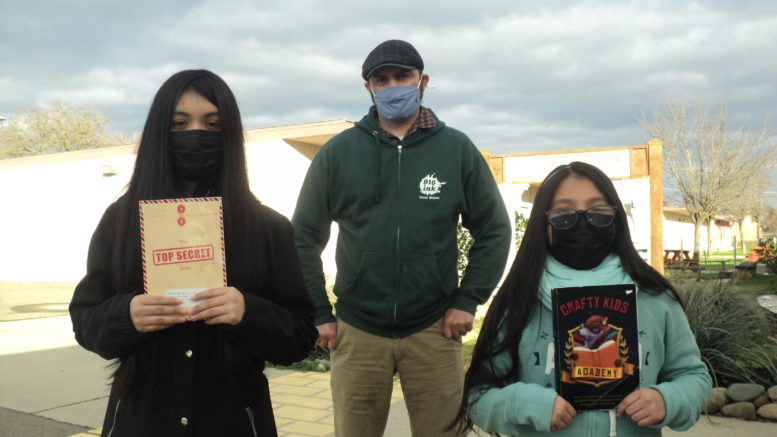 916 Ink’s Ian Hadley was flanked by two published sisters recently, near the closed Imaginarium. Kelly Hernandez, 13, (left) displayed one of three 916 Ink books with her compositions. Sister Kimberly, 10, who contributed essays to the tome in her hands, said, “I was really happy and emotional when I first saw my book.” Photo by Edgar Sanchez

The joyful parties at The Imaginarium are over for now—and Ian Hadley, the gracious host, misses them.

The Imaginarium is not a dance hall but a young people’s writing center in South Sacramento, a safe space that shut down last March after COVID-19 arrived.

To be invited to a party, boys and girls 8 to 18 first had to attend creative writing classes at The Imaginarium, usually after school. Under the guidance of professional wordsmiths, they created crisp essays and haunting poems in the 1,200-square-foot classroom.

Afterward, the alumni would return for book release parties—literary events where they received professionally-produced books containing their prose.

The first-time authors would read aloud from their tomes, drawing applause from proud parents and other guests.

“A fair number of parties happened here,” Hadley told a newsman during a recent visit to the shuttered Imaginarium. It’s an operation Hadley oversees as executive director of 916 Ink, a nonprofit supported by The California Endowment.

Walking past empty desks, Hadley appeared wistful, as did Allison Stelly, 916 Ink’s director of development, who unlocked The Imaginarium for a few minutes.

“I miss the energy,” Stelly said, recalling the magic that radiated throughout the room for five years, when youth would sit side-by-side, stringing words together at workshops that were mostly free.

When COVID hit in mid-March, 916 Ink closed immediately to comply with shelter-in-place edicts. Two weeks later it transferred its curriculum to Zoom. Since then, 916 Ink staff has worked remotely.

“When the pandemic arrived, we had 20 active youth groups across Sacramento County,” with some meeting at The Imaginarium and the rest at schools or community sites under the supervision of 916 Ink facilitators, Hadley said. “We realized there was still a need for our program … so we adapted it to Zoom.”

Since March, about 500 children have participated in 916 Ink’s ongoing virtual program, including 250 at a virtual summer camp. Fourteen books have since been published, on top of over 175 printed pre-COVID.

The Imaginarium wasn’t the only site for 916 Ink’s book release bashes; they also occurred at its partner local schools.

Kelly, 13, participated in three 916 Ink workshops and attended just as many parties at Ethel Phillips, each time receiving an anthology with her compositions.

The Imaginarium parties will resume after COVID.