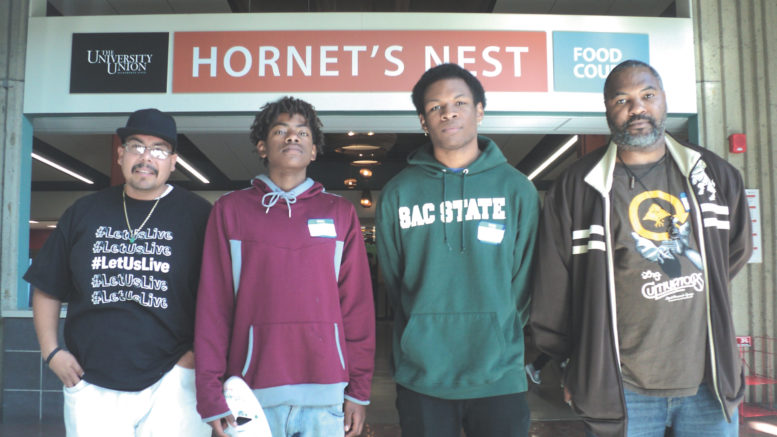 Thirty diverse young men—most of whom had never met—sat in a circle recently in a room at Sacramento State University, during the 8th annual Boys & Men of Color Summit.

The circle was just one of the activities at the pro-education summit organized by local youth with support from The California Endowment. About 200 youth, ages 12 to 23, from Sacramento and beyond attended.

Two adults, Raymond Garcia and Ryan McClinton, asked the youth in the ring who attended: “How many of you know who Stephon Clark was?”

“I heard about him on the news,” one youngster said.

“He was killed in his grandmother’s backyard,” said another.

Clark, a 22-year-old African American, was indeed gunned down in the backyard of his grandmother’s Meadowview home on March 18, 2018 by two Sacramento police officers who mistook his cellphone for a gun. Responding to a call of a fence-jumping man smashing car windows, they fired 20 shots at Clark, killing him instantly. No charges were filed against the police.

“When I learned about this incident, I was upset,” McClinton told the youth. “The cops who were responsible for keeping us safe didn’t keep us safe [that night].”

As community organizers for Sacramento Area Congregations Together, or the Endowment-supported Sac ACT, McClinton and Garcia, in conjunction with groups like Black Lives Matter, arranged protests against the police over-reaction that claimed Clark’s life.

Protesters blocked I-5 downtown, closing the freeway. And there were other demonstrations, including two in which picketers blocked Golden 1 Center entrances, resulting in the Sacramento Kings playing basketball before mini-crowds, because most fans couldn’t get in.

Josh Harris, an American River College sophomore, said he joined the protests “because I have three younger brothers,” and he doesn’t want them shot by police for being black.

Recalling Clark’s tragic death, Harris added: “I felt like Stephon Clark was my brother.”
Other students said they walked out of their classes in protest.

Garcia, a formerly incarcerated man who now obeys the law to the point of being a role model, recently moved to Los Angeles, but plans to return here.

Citing the power of protests, Garcia told the circle: “Slavery existed for a long time. But there’s no slavery any more. People like us fought against it. You guys are the next generation” that will fight injustice.

“When we walked into this room, we were strangers,” he said. “When we started talking, we were like brothers.”