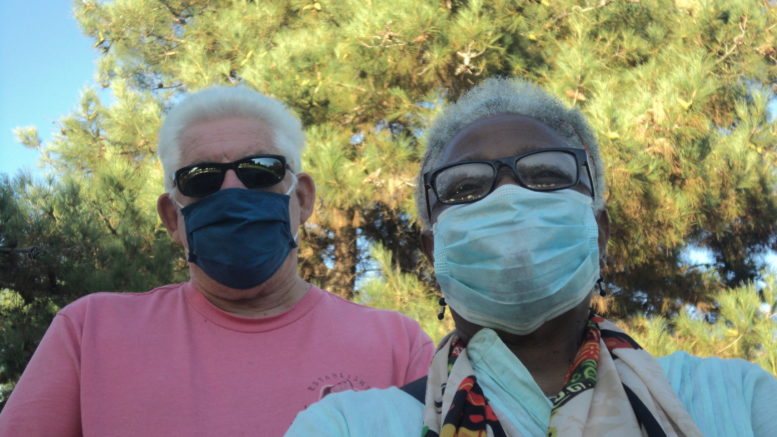 Bill Motmans (left) and Faye Wilson Kennedy (right) spoke at a recent press conference where Aggie Square developers were accused of ignoring neighborhood concerns regarding the mammoth project. Other speakers included leaders of agencies such as Sacramento Area Congregations Together and the Sacramento Housing Alliance. Photo by Edgar Sanchez

In mid-2018, Bill Motmans received an invitation he couldn’t refuse.

The Tahoe Park resident was asked to serve on a committee that would help guide development of Aggie Square, the cutting edge innovation center proposed for a site near Oak Park. The invitation was signed by Sacramento Mayor Darrell Steinberg and UC Davis Chancellor Gary May.

Motmans immediately agreed to serve on the Aggie Square Community Engagement Advisory Committee, formed by UC Davis and the city, the launching partners behind the public-private enterprise with a $1.1 billion Phase 1 cost.

“I believe neighborhood residents should have some say on a project of that import,” Motmans said in a recent interview. “I was thinking about the opportunity to have some real input into something that had so much potential to help” Oak Park, Tahoe Park and other nearby neighborhoods. Motmans made those remarks nearly three weeks after abruptly resigning from the committee on Sept. 4.

In a Sept. 16 press conference, Motmans stated: “UC Davis and the city (of Sacramento) have ignored neighborhood concerns since the beginning of this project … Despite almost a dozen meetings … (and) conversations with UC Davis, city staff, city elected officials and others,” the committee’s recommendations have been disregarded for two and a half years.

Motmans was not alone. At the press briefing, his words were echoed by speakers from Sacramento Investment Without Displacement (SIWD), a coalition born from The California Endowment’s Building Healthy Communities initiative. The coalition wants a legally binding community benefits agreement detailing how Aggie Square will help residents with jobs, healthcare and anti-displacement measures.

“Sacramento has more than 11,000 unhoused people. We can no longer continue to displace people” with projects like Aggie Square, Faye Wilson Kennedy, representing the Sacramento Area Black Caucus and the Poor People’s Campaign, told the media.

Mayor Steinberg did not respond to a request for comment, but UC Davis said in a statement:“The Aggie Square team has worked closely with our Community Engagement Advisory Committee and other neighborhood organizations for more than two years…We are grateful for their guidance and input because they have directly shaped the programmatic focus of Aggie Square. We will always welcome their ideas and feedback. Our building partner, Wexford Science & Technology, is working on programs for workforce development, youth development, public access to innovation spaces and a community partnership with a formal voice for representatives from area neighborhoods on an ongoing basis.”

The developers will work to ensure new opportunities for people in surrounding neighborhoods, it added. SIWD and residents said they will continue to monitor Aggie Square and push for a community benefits agreement.

To watch a video of Sacramento Investment Without Displacement’s press conference, visit BHC Sacramento Facebook and scroll down to Sept. 16.