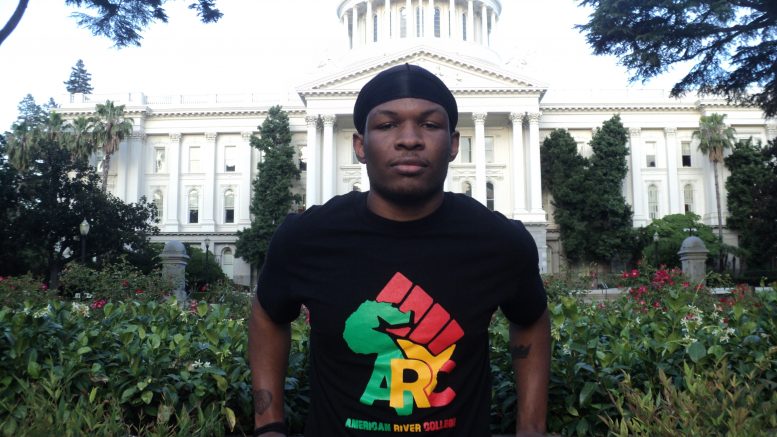 Josh Harris proudly participated in about a dozen Black Lives Matter marches in Sacramento this summer. On Nov. 3, he will proudly vote in his second presidential election. Harris is on a personal get-out-the-vote campaign. Photo by Edgar Sanchez

The long, hot summer of 2020 was unlike any Josh Harris had ever experienced. Once it began, he repeatedly took to the streets to demand that police treat Black people like him as human beings – not as targets for bullets and hatred.

Chanting “No justice, no peace, no racist police!” the 23-year-old American River College sophomore participated in about 12 Sacramento marches organized by Black Lives Matter, starting in late May.

The day-after-day rallies for racial justice unfolded across America and the world, ultimately involving millions of people.

Now that the protests have slowed, even as African Americans continue to be shot by police across the nation, Harris has a new cause: urging people to vote on Nov. 3.

While marching for progress is good, another step must be taken – into the voting booth, Harris believes.

He’s urging his family, friends and other people of conscience to help elect candidates who will enact sweeping reforms at all levels of government for a more equitable society.

First and foremost, as he told this column in June, Harris wants police held accountable for murdering unarmed Black people like Stephon Clark in Sacramento, George Floyd in Minneapolis and Breonna Taylor in Louisville.
Needed changes can begin with the defeat of President Donald Trump on Nov. 3, Harris suggested.

Harris first voted in the November 2016 presidential election, using an old-school ballot and pen at a local precinct. He still has his “I Voted” sticker.
“Even as a 19-year-old, you could just tell Trump didn’t have the best interests of anyone who looked like me,” Harris said recently. “So I voted for Hillary Clinton, although she wasn’t a perfect candidate either.”

Walking out of the precinct, Harris remembers “feeling responsible, like I had done something adult.”

Harris, who this time is supporting the Joe Biden-Kamala Harris Democratic presidential ticket, has little sympathy for non-voters. That includes the Sacramento-born Midtown barber who tells customers he’s never voted. And it includes the Vietnam vet who abstains from voting because, he says, voting could expose him to jury duty, something he dreads.

“Not voting leads to situations where people like Trump can be elected president,” said Harris, who is not related to Kamala Harris. “But I feel an obligation to vote, because my ancestors … didn’t have that right.

Harris is a protégé of Ryan McClinton, a community organizer for Sacramento Area Congregations Together, a group supported by The California Endowment.