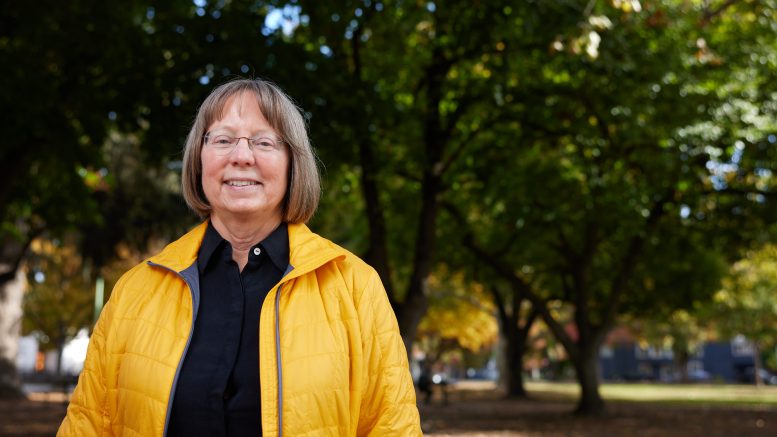 Diane Luther has an extensive background in affordable housing policy and development in Sacramento and Oregon. That includes over two decades of experience in both nonprofit and government work.

She was the executive director of Northwest Housing Alternatives, a nonprofit organization dedicated to developing affordable housing across Oregon. One of the projects she was involved with won a national Housing and Urban Development award; the Rosemont Commons is a 165-unit, 7.5 acre redevelopment project in Portland.

While working as assistant director at the Sacramento Redevelopment and Housing Agency until 2010, Luther teamed up with Mercy Housing and the Sacramento Municipal Utility District to spearhead the 7th & H Street project, a 150-unit apartment complex for low and extremely low income residents, which opened in 2013. Situated near retail shopping and mass transit, the eight-story building includes social services and a health clinic on the ground floor. The project won the Leadership in Energy and Environmental Design’s “State of the Art” certification for environmentally sustainable housing.

Now a private housing consultant, Luther talked to us about the success of the 7th & H Street project, government and private involvement in the affordable housing industry, and new ways to fund future building projects.

Tell me about the 7th & H Street project in Sacramento and who it serves?

The location was formerly a police station. We took that all out and built from scratch. A large portion of it is permanent supportive housing for extremely low income and homeless people.

Permanent supportive housing is directed at people with disabilities, including drug addictions, that are so disabled they cannot compete for housing. They need support. The housing needs to be very cheap and it needs to come with social support, like a manager or a case person who can make sure [residents] are getting medicine, or getting fed, getting their food stamps. It’s important not to think of homeless [people] as a monolith, like everyone of them has the same problem.

The rest of the units are general affordable housing that used government funds to write down the construction costs, charge lower rents and require that the tenants have low incomes. It is all affordable housing, but there are various levels of incomes, like for some people who have jobs. The blend of them makes it doable. The building is very green and now has a lot of services on site. There are common area spaces so that people can socialize. It’s also right on the light rail line.

The success comes from thoughtful design and on-site services that cater specifically to the residents?

Yes. It is more than just a place to stay. Each homeless person or household has to be dealt with individually, to see what their needs are and how they can get out of their situation.

Can successful projects like 7th & H Street be repeated in other locations?

We need thousands more affordable housing units in the Sacramento region. One thing that the area has — more than any other metro area in Northern California — is land. And whether it’s the city or county, the Sacramento area has done a lot to enable approvals and permitting. But the primary issue is always money. That involves getting money from the city, the state and any federal resources that are controlled by the state.

Are there any non-governmental organizations that will fund affordable housing projects?

Yes, they typically don’t have enough money to make a big difference, but will make contributions. The Chan Zuckerberg Initiative [Pricilla Chan and her husband, Meta Platforms CEO Mark Zuckerberg] established a big affordable housing organization, because they are responding to needs in the Bay Area. Facebook was bringing in all of these employees, and there was no housing.

For people who work in a city where they cannot afford to live, couldn’t the state government mandate more affordable living spaces in these more affluent locations?

The state is cracking down on cities that say they don’t want high-density housing in their jurisdiction, but need affordable housing and say, “Let’s build it over there, not over here.”

Every city has to create an annual housing element that provides for enough housing and the state tells them how much to provide for. In past years, the more affluent cities would put sites in their housing element that weren’t really for housing — just play the game to get around the policy. But the state is sending back those housing elements now, saying they have to do this right. It is requiring all jurisdictions to step up.

I understand another issue with developers is they feel certain environmental regulations need reform because they cause too many delays. Is that true and can it be fixed?

They’re right. CEQA [California Environmental Quality Act] is the one. It’s not really that common, but if you file a suit or a complaint, it can set a project back by a year. There have been [legislators] working on CEQA reform, like legislation that says if you are working on certain projects, you are exempt from CEQA.

Is there any other recent legislation on affordable housing?

The biggest legislative breakthrough that we just had was AB 2011 that enables affordable housing on commercial sites. There are redevelopment plans being developed for dead and dying malls. Sunrise Mall [in Citrus Heights] is one they are taking a look at. The plan includes commercial and medical offices and a lot of residential housing.

First, the county will adopt a plan and have a public comment period. Then they will try to recruit a developer who can build the housing. It helps if the county has some money to put on the table to attract a developer. They also want to get it rezoned.

So, it comes down to needing money again?

In terms of housing solutions, there is a bunch of money coming down from the state. But what we don’t have is a permanent source of funds that is ongoing and independent of the budget. The production of affordable housing is at the mercy of annual budget ups and downs. We need some kind of revenue source that is permanent.

One thing that’s been proposed is a real estate transfer tax. That is a small percentage levied when a property is sold. The State has a small one, which it could tweak for that purpose, considering that home sellers are currently making huge amounts of money when they sell.

Another idea I agree with is to eliminate the current subsidy [mortgage interest write-off] for second homes and use that money instead to support affordable housing.