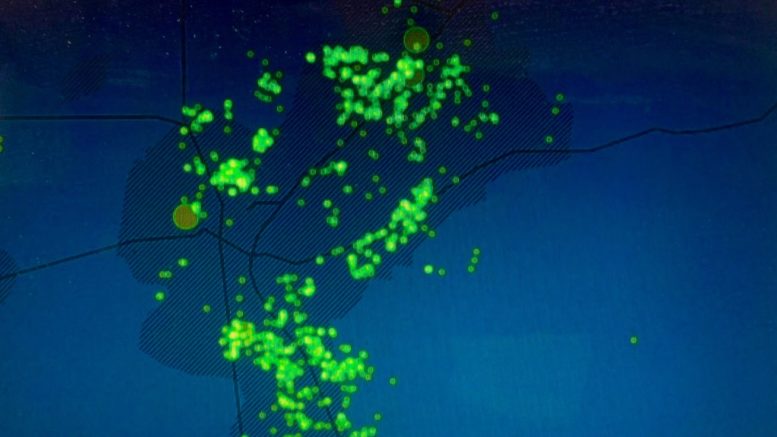 This map by the Anti-Eviction Mapping Project highlights in green the number of rental properties in the Sacramento region owned by Blackstone Group.

Blackstone claimed Sacramento’s housing market for Wall Street during the financial crisis, and it’s at it again during the pandemic – though a bill could come due

Sacramento has been called “the land of corporate landlords,” a legacy that goes back to the Great Recession when one private equity firm—Blackstone Group—plundered the region’s plethora of distressed homes to become a rental mega-force that no politician or advocacy organization could hold accountable, particularly for the mistreatment of tenants. Back in 2008, Blackstone capitalized on so many area residents losing their homes, and knocked so many ‘mom and pop’ landlords out of the market, that today it’s the largest private property owner in Sacramento County, and the second largest overall after the county itself.

So, exactly how many single-family rental homes does Blackstone own in Sacramento? The exact number is hard to determine because many of these properties are registered to a string of limited liability corporations, or LLCs, and other corporate subsidiaries. It’s estimated the property value of Blackstone’s local holdings is well above $107.5 million, and that the amount of physical property it controls is far above half-million square-feet of rental space, not counting its rental homes in Yolo and Placer counties.

For nearly nine years Blackstone and other corporate landlords have been bundling their portfolios together, securitizing them, and then presenting them to investors as “single-family rental bonds.” This tactic of bringing shareholders and bond-rating agencies into the fold has incentivized most of Wall Street’s rent lords to maximize profits through payment hikes, questionable evictions, aggressive fee collecting tactics and deferred maintenance, i.e., slum conditions.

The dominance of corporate landlords in Sacramento has led to stressed-out tenants and displaced families – all while companies continue to profit. Now, Blackstone and other corporations are finding ways to rake in more money from the COVID-19 crisis, according to a new study co-authored by Johnathan Heller of United for Respect and researchers from the Institute for Policy Studies, Bargaining for the Common Good and Americans for Financial Reform Education Fund. The report’s analysis finds that the top billionaire residential landlords operating in California have wealth totaling over $55 billion; and they’ve seen that wealth increase by $7.9 billion since the start of mandatory lockdowns and layoffs in March 2020. Even more jarring, the study found that the 10 richest corporate landlords, who already own and operate some 184,000 rental units in California, have now secured $191 billion in “cash-on-hand” to buy homes newly distressed by the pandemic.

“A handful of billionaire landlords have seen this pandemic as an opportunity to cash in,” Heller said during a virtual press conference Wednesday, singling out Blackstone as a key offender.

But California lawmakers may have finally had enough. Assemblyman Mike Gipson, who represents Compton – and who’s already passed key gun legislation over the objections of that industry’s powerful lobby – made it clear this week that he has had enough. Gipson’s introduced Assembly Bill 1199, or the Homes for Families Bill.

The legislation would put an excise tax on multi-million-dollar corporate landlords and then use the revenues to fund rental assistance and home ownership programs for working people.

“These corporate landlords are preventing our folks from living the American dream,” Gipson said Wednesday. “They’ve been forced out and can no longer build equity in home ownership … My goal is to disincentivize the hording of single-family homes.”

Gipson added he believes the revenues from AB 1199 would amount to $1 billion annually. The bill would also put new transparency mandates on corporations, in theory making it harder for them to obscure their vast ownership portfolios via mergers and LLCs.

“This requires them to report their identity,” Gipson stressed. “We want to know who’s buying up our community.”

AB 1199 is scheduled for its first committee meetings in the state house in early March.

Given Blackstone’s impact on Sacramento, local housing advocates are already working to get the word out about Gipson’s bill.

“Blackstone and other corporate landlords, they kind of fly under the radar in Sacramento in a lot of respects,” said Elliot Stevenson of the Sacramento Tenants Union. “Their influence in here is especially pernicious, and it’s not scrutinized nearly as much as something like a large apartment complex in Midtown or Downtown would be. These corporations specialize in these single-family home properties for a reason. Any legislature shining some sunlight on them is greatly needed – and long overdue.”

8 Comments on "When predatory practices catch up: Sacramento’s largest corporate landlord may be forced to pay millions to struggling renters"