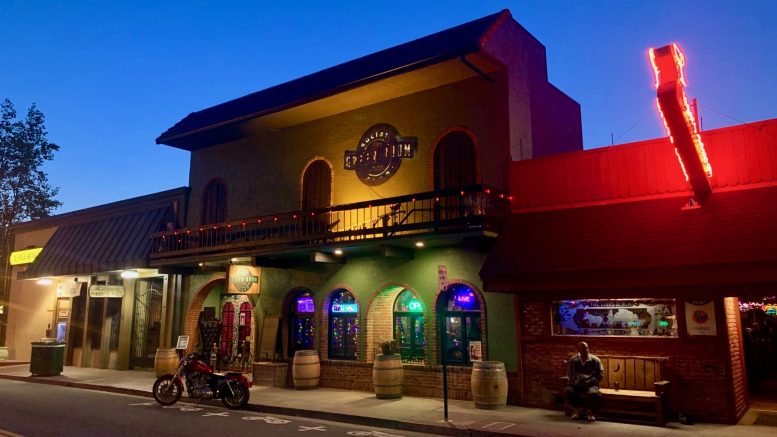 The Green Rook Social Club in Placerville will host an album release show for the Katie Knipp Band on May 14. Photograph by Scott Thomas Anderson

Northern California is rolling into its best weather month of the year and local stages are taking full advantage, hosting everything from Sacramento’s favorite musicians, to ongoing dance events and comic-themed art shows. With the warm, bright skies wavering from late spring to early summer, May is the perfect time to get out and see how much the arts truly are re-booting themselves around the capital.

May 7 thru 8: Dr. Sauce in the Mutantverse of Madness at The Crest Theatre & Impound Comics

QSauceDrops Art, formerly SauceDrops Toys, is bringing a new kind of art show to Sacramento with its “Dr. Sauce in the Mutantverse of Madness” event. The show features custom designer toys by artists from all over the country, along with additional pieces from Canadian artist as well. The show kicks off May 7 from noon to 5:30 p.m. at the Crest Theatre, in association with sponsors Another Universe Comics and Capital Books on K. The following afternoon, on May 8, the show will move to Impound Comics across the street from the Golden 1 Center. That day’s festivities will also run from noon to 5:30 p.m. Any art pieces that aren’t sold during the show will be available for purchase the next day on May 9. That sale happens online at saucedrops.com. For a sneak peek at some of the designer toys coming to Sacramento, along with some behind-the-scene glimpses of the event, follow @saucedropsart on Instagram. The Crest Theatre is located at 1013 K Street in Downtown Sacramento.

Noted Sacramento mystery writer Claire Booth will read for fans at a release party for her latest Hank Worth novel, “Dangerous Consequences,” the event happening at Face in a Book bookstore in El Dorado Hills. A former newspaper crime reporter for The Miami Herald, The San Jose Mercury News and The Contra Costa Times, Booth has made several national television appearances around the true crime genre. On the fictional front, “Dangerous Consequences” is the fifth installment in Booth’s popular series that is set in the musical tourism mecca of Branson, Missouri. This time out, Sheriff Hank Worth finds himself investigating how some elderly travelers ended up in a Ozarks emergency room. Booth’s appearance includes an author talk, a reading, a Q&A and a book signing. It runs from 5:30 to 7 p.m. Face in a Book is located at 4359 Town Center Blvd., #113, El Dorado Hills.

After her last two albums hit the top 10 on the Billboard Blues Charts, Sacramento’s Katie Knipp and her band decided to capture a live concert at The Green Room Social Club in Placerville. Knipp has described that night as a cathartic chance to showcase the raw, energetic talents of drummer Neil Campisano, bassist Zack Proteau, guitarist Chris Martinez and sax player Otis Mourning, especially after the band’s forced time off during the pandemic. Performing all original songs from Knipp’s albums released between 2005 and present – with Knipp herself playing keys, dobro guitar, and harmonica – the ensemble was doing exactly what Relix magazine pointed out when it predicted “this gumbo pot of cross-over blues is about to shake up the roots music world.” Knipp is a two-time winner for best blues artist in Sacramento, along with female artist of the year in 2021 and 2020 by the Country Folk Americana Blues Realm. The celebration of her band’s new live album will happen where the original recording took place, The Green Room Social Club, and will be hosted by Blues Matters Magazine. The actions goes down Saturday, May 14 at 9pm. Tickets can be purchased here. The Green Room Social Club is at 251 Main Street, Placerville.

May 15 – House of Oliver’s live music night with Hannah Brooks, Madeline McArthur and Tony Cole in the Stingers

The House of Oliver wine bar in Roseville will host a slate of live performances May 15 featuring singer-songwriter Hannah Brooks, guitarist and vocalist Madeline McArthur and the new Jazz quartet, Tony Cole and the Stingers. Beyond House of Oliver’s wine menu, it also offers a full cocktail menu and large selection of tapas-style dinner options. Cover charge for the show is $10. Tickets available online at www.houseofoliver.com. Doors open at 6 p.m. The House of Oliver is located at 3992 Douglas Boulevard in Roseville.

May 19: Badia the Bellydancer at Kasbah in Midtown Sacramento

Sacramento’s mistress of Egyptian cabaret will show why she competes all over the nation in an ancient art form at Kasbah restaurant on J Street on May 19. Bridggett Bess, known on Capital City stages Badia the Bellydancer, has danced alongside of everyone from local dance legend Jodette, to Mayte Garcia, the belly dancer from Prince’s music video “7.” Badia’s upcoming show at Kasbah is part of an ongoing series of appearances at that venue happening every Thursday of the month at 7 p.m. Kasbah is located at 2115 J Street in Sacramento.

May 28: Kaki King at the Sofia Theatre in Sacramento

Composer and musician Kaki King is considered one of the world’s greatest living guitarists, known both for her technical mastery and for her constant quest to push the boundaries of the instrument. Hailed by Rolling Stone as “a genre unto herself,” Kaki has released 9 albums and toured extensively. Kaki’s new multimedia project, DATA NOT FOUND, marks her first foray into experimental theater as she continues to redefine her guitar as a tool for storytelling, exploring contemporary issues like A.I., the natural world, “big data” and personal empowerment. Her show at the Sofia Theater starts at 7 .m. Tickets range from $28 to $33 and can be purchased here. The Sofia Theatre is located at  2700 Capitol Ave, Sacramento.

Editorial: Combating the pandemic blues with California sunlight and the sounds of Sacramento