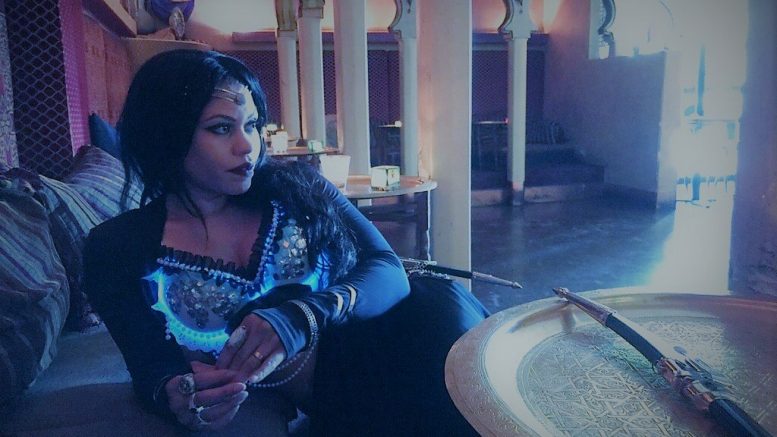 She dances, sings and acts: Whether taking the stage as Badia, or grabbing the mic as Pandora Gunn, Bess sees no limits to connecting with audiences

Storytelling, whether captured on film, brought to life on stage or heard through a song, is an artist’s boundless form of expression. It also gives the audience a means of escape, even if just for a moment.

For multitalented performers like Sacramento’s Bridggett Bess, whose striking artistry manifests through her talents as an actor, singer and belly dancer — which persona you meet simply depends on the type of escape you’re after.

Whatever the preference, Bess strives to introduce audiences to a world full of intrigue and entertainment, and it all begins with the allure of Egyptian cabaret.

“I just really connect with the music; and then, after learning about a lot of the parallels from the golden era with Hollywood stars, versus the Egyptian stars, I became even more attracted to it,” Bess says. “Just the movement, the fluidity, there’s just something about it. If you’re not feeling good, or if you are feeling good, when you move your body, it’s just like a release. I like the idea of letting my body do what the music says.”

Of movement and music

One glimpse of Bess’s artistry happens on Thursday evenings at Kasbah, a longstanding Middle Eastern restaurant on J Street. There, she’s known as Badia the Bellydancer, someone who mesmerizes patrons with her sultry movements that tastefully pay homage to Egyptian cabaret, which was made famous during the golden age of Egyptian Hollywood cinema in the 1940s.

“You get different types of crowds when you perform live,” Bess notes. “I’ve always preferred the stage, but I do also love to dance at restaurants. You get the interaction to get the ladies up, or the guys up, the kids love it, too. It’s super exciting when you see people of the culture come around because they just light up because they get it.”

She adds, “I don’t speak Arabic, but the music is just so universal and it has a strong, strong pull.”

Kasbah owner Debbie Wu says that when Badia performs, she brings a magnetic appeal to the ambiance, with an added layer of mystique, which bolsters a vibe the Midtown restaurant have been trying to create for the past 17 years.

“I remember one night during service, she was the dancer and I just thought she was amazing from the start,” Wu recalls. “She has a very electric performance style. It’s very captivating and makes the entire experience more immersive. One of my favorite things about her is just her go-getter, creative spirit. Every time I talk to her, she’s up to something new, going to L.A., doing something in Sacramento. She’s very talented and multifaceted.”

Before she became Badia the Bellydancer, Bess attended high school in Wiesbaden, Germany, with other military families. She ultimately jetted off to Fayetteville, where she took classes at North Carolina Agricultural and Technical State University and studied the theatre arts.

Always the child performer, Bess recalls watching old, black-and-white films with her grandmother, a woman who appreciated the classics. Bess also remembers the first time she was charmed by the hip work that’s synonymous with belly dance, along with the genre’s colorful, beaded costumes and their slightly revealing elements.

“I had seen a video that Prince did when he was married to Mayte Garcia, who was a dancer: That was the first time I’d ever seen a belly dancer at all,” says Bess. “And I always said to myself, this is something that I have to do at some point in my life, but I didn’t know when it would happen.”

After college, Bess found herself walking around Midtown Sacramento when she stopped in front of Jodette’s Belly Dance Academy on 21st and K streets. It was her doorway for taking lessons and delving into the history of the centuries-old art form. Eventually, Bess was crowned with the name Badia, inspired by Badia Masabni, who was considered the creator of modern belly dance from the 1920s onward.

“That made me want to learn it even more,” Bess admits. “So, I got into studying a lot of the background behind it. [Jodette] would give us belly dancers to study, and she would tell us to study the black-and-white movies. Her teaching is like a foundation for the years that I’ve put into developing my artistry with belly dance.”

Over the years Bess competed in annual showcases such as Bellydancer of the Universe in Long Beach and Bellydancer of the Year in the Bay Area. But she says her proudest moment was taking a workshop with Mayte Garcia in San Francisco, the belly dancer from Prince’s music video “7” – and the woman who first inspired her.

Beyond belly dance, Bess is an experienced rock vocalist with an affinity for electronic music, as well as the founder of Chixx that Rock, a nonprofit organization that raises funds for various local charities through live musical performances with women at the helm. Although the pandemic has recently paused those efforts, Bess says she plans to continue Chixx that Rock’s mission when the timing allows.

“That’s something that’s ever-evolving, that I had to stop because I was going to L.A. and New York for television and film projects,” Bess says. “Since the pandemic, I haven’t been able to get back to it because I don’t want to do it virtually. I think it’s better live.”

For now, Bess is pouring her energy back into acting, sending in audition tapes while adapting to the ways the pandemic continues to impact the entertainment industry. Like singing and dancing, acting is yet another form of storytelling where Bess can take on any persona she so desires. Her work in the form is a testament to breaking through and sharing more of her story – and talents – with audiences on-and-off-screen.

“I feel a lot of my mission is to be an artist and to express things and add to storytelling in many forms,” she reflects. “That gives me the drive to learn more about myself and be inspired by the different ways I can channel that through art. I like telling stories because it’s limitless and safe. Your mind can go to so many different places, or you can portray and tell so many different stories. And when I dance, I feel joy, I feel happy, I feel free. I feel grateful to see other people smile and want to be a part of that energy.”

Be the first to comment on "Hips don’t lie: Belly dancer Bridggett Bess charms Sacramento with a life of storytelling through the arts"