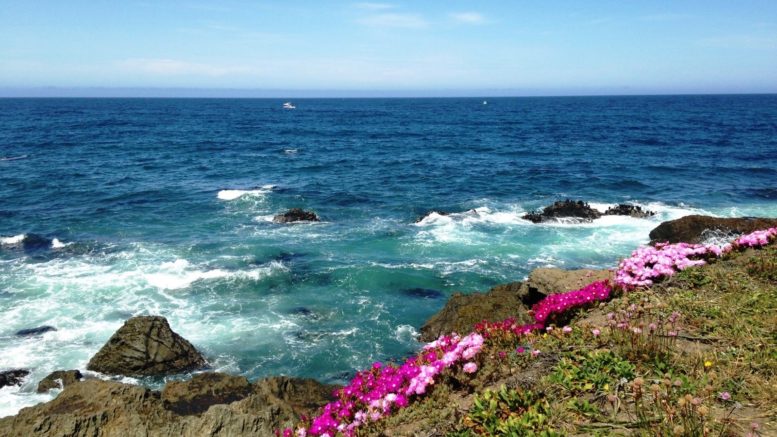 The coast near Mendocino Village. Photograph by Scott Thomas Anderson

Our light at the end of the COVID tunnel feels like it’s arriving as the sky-glow of spring; but that does not mean peoples’ stress it totally alleviated. Some folks are still waiting patiently to be vaccinated. Others are on edge about whether local businesses will finally have a fair shot at surviving in June. Still more people are faced with clawing out of a Carkoon pit of back-rent and unplanned debt that they were hurled into by the pandemic. The malaise of anxiety may be lifting, yet there are a lot of Sacramentans still trying to calm their nerves and spirits.

Fortunately, the River City is ideally positioned to connect with an escape chute from the madness of the moment: What’s been my own way to cope with the most-challenging reporting time in my 15-year career has probably been a meditative lifeline to many other people, too. It’s California’s spectrum of natural splendor called the Pacific Coast Highway. In the last 13 months, I’ve found that long drives along its wave-crashed cliffs can massage the mindset with awesome, unrivaled glimpses of the wild.

Given all the recent talk about the Golden State being in a perpetual state of decline – its best days supposedly behind it —a wind-rushing cruise up Highway 1 can offer a view of how special the edge of the West really is. And if Sacramento Blues and Rockabilly are rattling your speakers as you take in the vistas, even better.

A good place to start the north-bound odyssey is Point Reyes Station, on the very edge of the Tomales Bay. It’s a former port and railroad station with a rustic cheese shop, a nature-obsessed bookstore and a slightly Hitchcockian vibe. You can navigate there through Point Richmond, crossing the Bay and then exiting Highway 101 at Lucas Valley Road. That route takes you through Marin’s tumbling shamrock hills and the mossy shadows of its old-growth forest. Or you can get off Interstate 80 at the Wine Country’s Highway 37, steering along Petaluma’s spring-sparkling ranchlands and farms newly dusted in yellow wildflowers. Either way, once you break out of Point Reyes onto Highway 1, all the pressure from this “pandemic nation” just burns off in the breeze.

Last week, I took this journey again, starting the drive with some tunes from Frankie and the Defenders, a rockabilly band that’s conquered the SAMMIES for three years in a row. It’s not hard to understand why: Their album Rockabilly Radio is a Tarantino-esque trip through all that’s great about hallow-bodied guitars ripping into California’s surf legacy. From “Wheels on Fire” to “Boys Night Out,” the Defenders’ rhythm section runs like a souped-up juggernaut Chevy that can’t be stopped.

Cruising by the spate of fishing hamlets between the national seashore and Dillon’s Beach, I kept glimpsing people relaxing in the sun as they watched the tide and ate barbecued oysters. One of Frankie and the Defenders’ more eerily entrancing songs started to play. “Pirate and the Rose” begins with a ghost-lament of weeping, six-string reverb. Within seconds the band falls into a kind of zombie waltz, dancing up scenes of a haunted ocean with waves moved by a sterling silver guitar. It’s a piece that feels made for the Pacific Coast Highway.

Heading to where old redwoods cascade along the towering shores between Bodega Bay and Sea Ranch, I switched my stereo to some rhythmic regulars from The Torch Club. Red’s Blues is a band with years of gigging scars behind their performances, and the third album they recently released is a fusion of classic blues and California nuance. It’s also an album inspired by life on the road, particularly its excellent title track “Broke Down in the Fast Lane.” The piece starts with a brawny 12-bar blister that Beth “Red” Reid-Grigsby enlivens with her subtle but scintillating vocal phrasing.

Its lyrics are stellar: “Fifty-dollar bonus and a half-a-pint of gin.”

Then, “Hard to make a living with the shape I’m in.”

This writer can relate.

The arrangement is carried along by R. W. Grigsby’s freight train bass, a hoppin’ piano and the echo of a pristine, pain-laden harmonica. It all culminates in “Red” singing, “This old Ford has been a hell of a ride / fifteen years and quarter-million miles / Waiting for an Angel with tow bar and chain / This old car will never be the same.”

Detroit dreams and roughneck ladies from Heaven – if anything says American Blues, it’s that.

“There was just a total symbiotic connection with everyone playing that day,” Beth later said of the session at Dog Yard Studio. “Johnny Burgin was sitting in on guitar, and he knew exactly what we wanted – and he just brought it.”

While Reds Blues is a vanguard for the nation’s early Delta breakthroughs, a track like “Sweet Karma” is full of sweet southern sounds on a broader level, the group boogying on with breezy swager and Red’s sharp vocal dynamism. Guitarist Doug Crumpacker is in the SAMMIES Hall of Fame and Sacramento Blues Hall of Fame, while drummer Tim Wilber shares the later distinct with him. And neither disappoint on the new album.

“It’s about balancing traditional blues with our own personalities,” R.W. explained. “That’s what we’re always striving for.”

After admiring the Gualala River spilling from the coastal mountains into the sea, I got back in my car and put on the latest album from Sacramento’s experimental Blues bellwether, Katie Knipp. The Well’s opening track, “Sad Eyed Lover,” kicks off with a take-no-prisoners trot bumping under crisp horns and the teasingly fast whip-work of Knipp’s dobro. From there, the singer’s side-glancing attitude and vocal intensity offer a fun musical scolding of mediocre people. The dance hall-style call backs from the players are a nice touch, while the sudden blasts of free-flying street jazz brighten its relentless flow. It’s a song that’s pure energy. There’s also something about using the blues genre to berate crybabies that’s a little punk – and it works.

Another standout is Knipp’s sassy, soulful number “Chamomile & Cocaine.” The piece finds the band shifting effortlessly between gutsy grooves and a face-splatting swing, Knipp’s clever lyrics showcased by the smoldering rawness she can push through her voice. Here, Knipp’s vocal power is equal measures of sweetness and spice – and the song itself is a great choice for those stretches of roadway where the pedal can get to the floor.

Reaching the craggy, tree-swept coast outside Mendocino Village, I noticed Knipp’s performance in The Well is marked by the kind of vocal gusto that I associate with a singer like New Orleans badass boss-lady Wanda Rouzan. It turns out that’s not a coincidence. Knipp later told me that New Orleans blues, funk and jazz have influenced her for years, a love affair that first took hold through the music of the late pianist Allen Toussaint.

“We’re all a product of our influences, so those things that I enjoy are going to naturally flow into what I’m doing,” she said. “As a singer, I’ve been most influenced by people who have their own unique sounds to them – people who are saying something that comes from a pure place. It took me a long time to figure out who I was as a singer; but now, if a song calls for a pretty note, I’ll do that, but if it calls for some grit, I’ll definitely do that.”

From “Chamomile & Cocaine” to “Bullet Train,” Knipp constantly balances that constellation of emotions in a way that’s never boring.

For me, the bends between Mendocino Village and Fort Bragg are the best part of the Pacific Coast Highway. That’s partly because one of my favorite directors, Elia Kazan, came there with James Dean in 1954 to film his masterpiece “East of Eden.” Of course, John Steinbeck’s novel is set in turn-of-the-century Monterey; but in the years after World War II that part of Highway 1 was already so built-up it didn’t resemble the place of the author’s youth. The Mendocino Village-area still did.

Sixty-seven years later, it continues to look that way. It’s one of many spots on the California coast that can quickly rejuvenate your inner-being. And that’s worth remembering, especially when it’s only a car ride away during overwhelming moments. What’s even closer? All the unique creations and connections from Sacramento’s arts scene. The books. The paintings. The photography. The crafts. The spoken-word performances.

The music that makes you want to get in the car and just drive.

Be the first to comment on "Editorial: Combating the pandemic blues with California sunlight and the sounds of Sacramento"