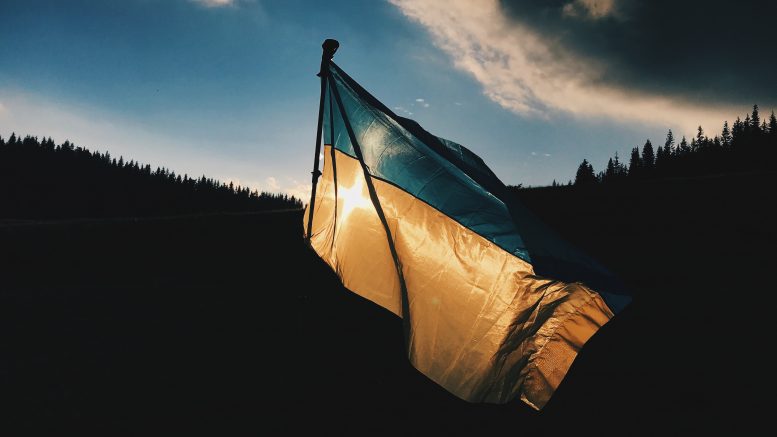 The Ukrainian flag at sunset. Photograph by Max Kukurudziak

My father shared a story with me recently about his adolescence in Ukraine, which was then part of the Soviet Union. There was no independent press and all media was government-run. So late at night he and his father would sift through radio signals until they picked up a European broadcast like the BBC. These late-night windows into democratic culture planted the idea of freedom in my father’s mind. He decided at a young age that one day, he would leave the USSR for America.

Today, as my fellow Ukrainians fight to protect their democracy, I fear that history is repeating itself.  It’s not only the Ukrainians, including several family members, who I fear for, but the Russians living under Putin’s regime. Anyone who contradicts the Russian government’s version of events could now be jailed for 15 years, and all independent news sources have been shut down, including Facebook and Twitter. Russians are being told that soldiers are fighting far-right Nazi groups. They’re being lied to about the lack of Ukrainian civilian casualties. But just like my father back then, not everyone believes the Kremlin’s messaging. Many are horrified by the war and fed up with the increasingly totalitarian state.

This is why I hope Americans will remember while supporting Ukrainians to also have compassion for the Russian people. They shouldn’t be penalized because they lack access to the truth. We must also avoid making assumptions about Russians in the United States. A person’s nationality isn’t necessarily a representation of their beliefs; many Russian-Americans in this country are sympathetic to the Ukrainian cause—because it is their cause too. We must keep an open mind toward them, just as we must keep open arms for the Ukrainian and Russian refugees who are fleeing Vladimir Putin.

I was born in Kyiv in 1981. Ukraine was still part of the Soviet Union then and our lives were very restricted. We weren’t allowed to move from one city to another without permission from the government, and my parents grew increasingly concerned when I began learning communist propaganda in kindergarten. When I was 9, my family received a rare opportunity to resettle as refugees in America and they made the hard decision to uproot their lives in Ukraine. My father was finally going to see his boyhood dream come true. A number of resettlement organizations helped us get settled –finding us housing and connecting my parents to work placement agencies.

When we arrived in New York, we lived in a Bronx neighborhood with many Russian and Ukrainian immigrant families. I felt at home there. I’d often tell my American classmates that I was Russian, because it felt easier than explaining where Ukraine was. When I was older, part of every summer was spent at a Russian youth camp in upstate New York. Far from being enemies, the Russians and Ukrainians I knew perceived each other almost as siblings – closely related but different. We had one important thing in common: we’d all endured the same communist regime.

My family’s path toward integration was like a lot of immigrants. Initially, my parents struggled. In Kyiv, my father worked at an electron microscopy facility, maintaining specialized equipment, but his first job in the U.S. was delivering pizzas for Domino’s. My mom had been a university historian and archaeologist and, unable to find similar work in the U.S., she stayed home to take care of me. But with time and hard work they found their way. After a few years, my father found an opportunity again to work in his field, at a university’s electron microscopy lab. My mother now manages a Russian Orthodox cemetery. Even with Russian troops inflicting immense suffering on her friends and family back home, she knows not to blame the Russian people. She welcomes them as any other person entering her office grieving the loss of a loved one.

Thanks to the sacrifices and hard work of my parents, my road in this country was far smoother. The public elementary school I attended in the Bronx was incredibly diverse, with immigrants from all over the world, so I never felt like an outsider. I recall watching ThunderCats cartoons on TV to learn English before the school year began. We were able to eventually afford a home in New Jersey. I studied environmental science at Rutgers University, then received my Master’s in Ecology from Penn State University. I have forged a successful career in the natural resource management field, currently assisting agricultural landowners in Sonoma County with pressing resource issues. When news of the war broke out last month, I was touched by the heartfelt messages from my Russian and American friends asking how they could help Ukraine. The outpouring of support across the world has been inspiring, but it has come with anti-Russian hate. My mother’s coworkers have faced harassment and it’s heartbreaking to see this polarization occur.

I’ve been an American citizen for 22 years now. I no longer feel like a refugee. But that’s because this country welcomed my family and allowed us to take part in its democratic culture: of freedom, expression, tolerance and self-determination. If we strive to do the same for the Ukrainians, Russians—and all refugees—coming to our shores, the message and power of democracy will persist. It will cut through the repression and the hatred and continue to offer this hope to anyone who might be tuning in secretly to a midnight radio broadcast somewhere else.

Anya Starovoytov is a project manager with the Sonoma Resource Conservation District and lives in Woodland.

Be the first to comment on "Essay: My family left Soviet Union-era Ukraine to find freedom – today, we must welcome those doing the same"