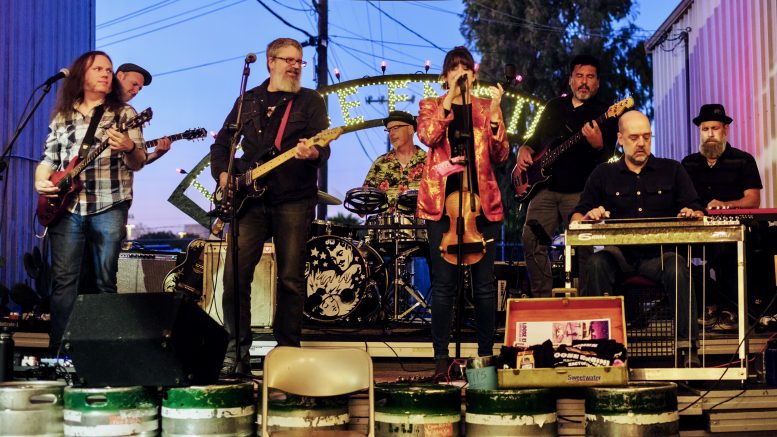 With the first-ever Infinity Festival just days away, Loose Engines’ Grub Dog Mitchell is working with artist Eric Affonso and Bacon Fest’s Brian Guido to bring all of Sacramento’s various strands of creativity under one roof. And not just any roof – the flurry of artistic action will happen under the shingle of the city’s best-known cider house.

Sacramento is often celebrated for having a tireless community of musicians, dancers, photographers and innovators on the visual front, most of whom keep forging paths to success through their determination and a mutual love for each other’s efforts. Such connections can be glimpsed at celebrations like Second Saturday, Concerts in the Park or the Whole Earth Festival. Still, those festivals are usually programmed to showcase a single artistic method, ignoring a sea of potential in favor of a side of beer and tacos.

With the goal of bringing an array of styles together in one place, veteran singer-songwriter Grub Dog has teamed up with Two Rivers Cider to launch the new Infinity Festival on March 19. The maiden voyage of this one-day event features more than 20 artists, performers and chefs sharing three stages in the Hollywood Park cider facility. The action runs from noon to 9:30 in a neighborhood not far from Sacramento City College.

“The creative community here is very insular,” said Greg ‘Grub Dog’ Mitchell. “The chef’s hang out with chefs, the musicians hang out with musicians, the artists hang out with other artists. The art community, in the larger context, should be something that everybody enjoys.”

In the 2000s, Mitchell left Sacramento for a time, taking a sojourn to Austin, Texas, where he was exposed to the South by Southwest festival each March. Whenever SXSW was in full swing, Mitchell noticed artists of all kinds commingling in the streets. He remembers it as a kind of magic just beyond his front door – an energy he now hopes to achieve with Infinity Festival.

“Once I moved [back to Sacramento], we wanted to do something outdoors and something free that people from the community can come down and enjoy,” Mitchell noted. “I like coordination between all the different disciplines, and we want to expand that later [to add] theater people, poets, writers. We want to bring the whole creative community together at some point and find a way that we can celebrate Sacramento on its own.”

According to Sarah Wright, Two Rivers’ tasting room coordinator, hosting a festival of this magnitude at the popular cider stop was a no-brainer. Wright acknowledged that an outpouring of local support has kept Two Rivers afloat not only during the recent COVID shutdowns, but even through the unsure venture of making the tasting room a reality back in 2016. Wright thinks that Infinity Fest is a way for Two Rivers to feed back into a community that’s shown great neighborhood engagement with it.

“One of the things that happens when you’re in a place like we are — a little bit off the downtown grid — is that you become really appreciative of your neighborhood and the community who is supporting local business,” Wright admitted. “When we do fundraisers and festivals, so much of it is just like a way to connect to other Sacramento people.”

Wright added that Two Rivers’ owner, Vince Sterne, has a deep appreciation for music — his passion directly leading to Two Rivers hosting Cider Sessions, a series of high-quality videos done at no cost to the performers.

These sessions featured cream-of-the-crop musicians like Boca Do Rio, The Gold Souls, Katie Knipp and Mike Blanchard & the Californios. They began streaming in April 2019, nearly a year before most performance opportunities were put on hold by the pandemic. After that, in many cases, Cider Sessions were the featured musicians’ only opportunity to perform outside of their homes for quite awhile.

“I love that we work with so many different people, as we end up meeting permanent community members that we just never would have found otherwise,” Wright mentioned. “It all loops back to Vince Sterne; he knows everybody, but he’s also just so passionate about music. Cider Sessions was like a love child of Vince’s. They weren’t charging musicians to use the space or the production time; it was really just to build more music community and connections.”

Some of the proceeds from the festival will benefit local organizations such as Girls Rock Sacramento and The Library of Musiclandria.

“We work with both of those groups quite a bit on our own, and we wanted to have a centerpiece for the bands to feel like they can contribute without us having to frankly put out a huge amount of money for each band,” Mitchell said. “So, everybody’s on board to do this to help these two charities and that was a real big help.”

Mitchell hopes Infinity Festival can pick up enough steam to benefit future generations in Sacramento. His future plans for it include scholarships that could give emerging performers and artists access to the resources they need to excel.

“It’s really going to be a cool family affair, and I’m hoping to bring people together not just now, but to look at Sacramento differently,” Mitchell acknowledged. “What we really need is to put Sacramento artists up there among any national act that comes through, and have some pride with what we’re trying to accomplish here. We’re looking at that down the line is trying to really help people become a part of the art scene in an easy way, because we’re already all together.”

Be the first to comment on "‘Infinity’ live: Sacramento’s Loose Engines and Two Rivers Cider plan a new festival for re-shaping creative connections   "