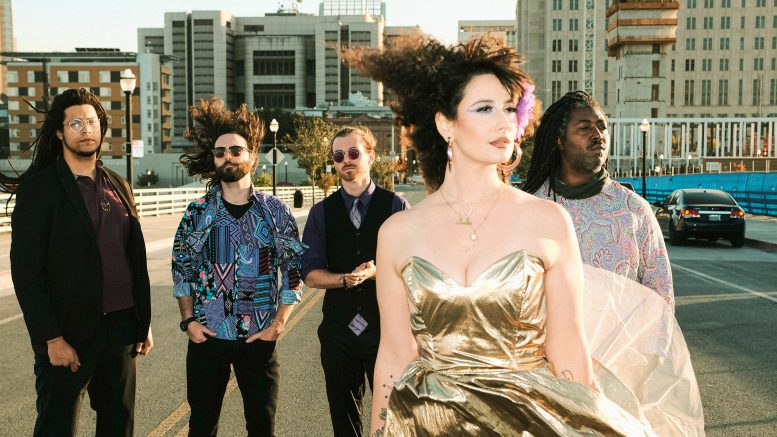 With live music selling out large-scale festivals and filling independent venues again, many Sacramento bands are looking to re-connect with audiences after more than a year away from the stage.

One of those groups is the funk-driven quintet, The Gold Souls, who are eager to lure fans back with some blues-and-soul-heavy stylings that always make peoples’ feet move.

But beneath the unassuming, hip-swayin’ beats and feel-good melodies, The Gold Souls also pour their energy into writing lyrics on social topics that each member is passionate about: Those include labor inequality, toxic masculinity and even Sacramento’s rapidly changing cultural landscape. It’s all heard on the band’s new sophomore album, Downtown Sound.

“I think that we’ve always tried to really bring an idea of togetherness and unity inside of the music,” says keyboardist Alex Severson. “We can point out these huge social issues, and we can talk about it, but we can also make sure that people feel safe and heard while also still dancing.”

In the titular song “Downtown Sound,” vocalist Juniper Waller reminisces about walking the streets of a familiar city, only to realize it’s almost unrecognizable. Waller says the song also reminds her of how the art community is still recovering from myriad hardships stemming from the pandemic. But the lyrics of “Downtown Sound” aren’t solely dedicated to Sacramento’s growth and cultural shifts. In a broader sense it’s a story that applies to many cities experiencing similar change and hardship.

“I think it’s really telling how the entire performing arts industry was the first to close down, and kind of the last to recover,” Waller notes. “I think so much of the question that we’re asking in the album, and in this moment, fall 2021, is: ‘Things are changing a lot. Is there going to be a place for artists in this new landscape? Is there going to be a place for art and for those who make art who don’t want to slave away at a bullshit job?’”

Like many performing artists, The Gold Souls spent most of 2020 cautiously working on various musical endeavors from home. Waller started a new duo called Honeyrush with her neighbor and guitarist Steven Morkert, of the indie rock group Band of Coyotes. Severson kept busy with his roommate Joshua Hanes by creating The Remedy Revue, a virtual venue experience that connected musicians with audiences online. The Revue even hosted last year’s Davis Music Fest.

“Everybody had to change their skill sets,” Severson observes. “Oh, you were a band? Well, welcome to making YouTube videos. There were so many pivot-moments for a lot of people, so I think that when [The Gold Souls] got back to doing something that we knew, it was very much like this breath of fresh air.”

Over the last six months, drummer Billy D. Thompson not only dove into a lo-fi, hip-hop project called King Kalm, but he also sharpened his musical engineering skills with Downtown Sound as his muse. He credits Patrick Langham, who plays bass for local funk band Big Sticky Mess, for helping produce The Gold Souls’ record, now three years in the making.

“It’s interesting all the changes that happened to the songs, and how much the recording process informs the composition,” Thompson says. “It’s hard to know the right time to be done with an artistic endeavor. But for us, you’re not able to grow if you’re stuck working on the same project for too long. It can stunt the growth in the momentum, creatively.”

Now, The Gold Souls look forward to entertaining fans with their funky appeal and vibrant approach to live performance during a release show at Harlow’s on Halloween night. The line-up for this Oct. 31 blow-out includes Big Sticky Mess and Boca Do Rio, with doors opening at 7:15 p.m. and show starting at 8 p.m. Tickets are $20 in advance $25 at the door, and can be purchased at www.harlows.com; www.thegoldsouls.com. It’s not the band’s first show back by any means, as The Gold Souls spent the summer playing venues from Sacramento to the beach-side stages in North Lake Tahoe, but Waller thinks the Harlows gig will prove how serious they are about rekindling the area’s love for live music.

“People across the board, at all the shows we’ve done, they’ve been so excited for live music to be back,” Waller stresses. “Every time we play a show, we ask if it’s anyone’s first time, and there’s still people that come up to us and say it’s their first show back. So that’s really cool to get to share that moment with people.”

As performers, The Gold Souls say there’s a personal risk they take with each live performance, mainly because they face a variety of crowds and enjoy chatting with audiences. But music is their livelihood – their natural boost of serotonin. They’ve decided to cautiously keep venturing on while acknowledging that music is healing, and that’s something needed now more than ever.

“There’s still kind of this hesitation that, yeah, we’re not through this yet,” Severson acknowledged. “But everybody’s really trying to make the best out of what we can and keep pushing forward. These are songs that have all really sat and marinated for a good amount of time. And now, they’re ready. It’s cooking. It’s hot. I’m very excited to be able to share music again in a live capacity, even if it doesn’t look exactly the same way as it used to.”

Be the first to comment on "Behind the funk: Sacramento’s The Gold Souls come storming back with ‘Downtown Sound’"