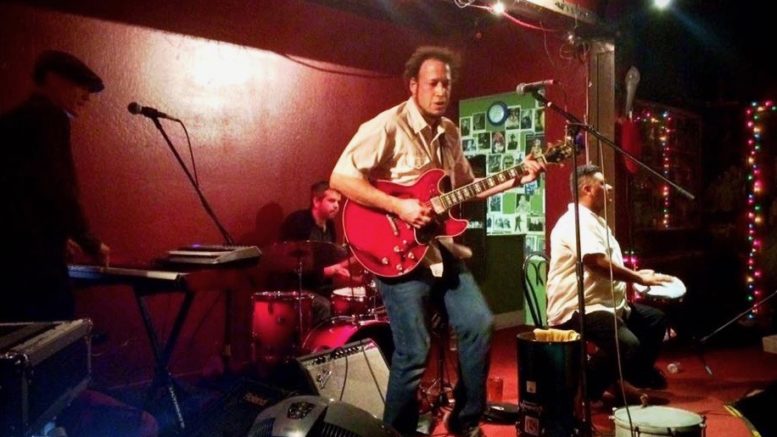 The Davis-based band Boca Do Rio was just awarded the latest DIMI grant. Photo courtesy of the band.

Spicy guitar echoes and tambourine shimmers trickle down a slope of Nevada City as Kevin Welch and Alex Calatayud hone their craft far from their stomping ground of Davis. In the nearby trees, an audience of cautious squirrels and birds gather as the musical pair – the backbone of Brazilian space-funk band Boca Do Rio – explore moments of seclusion within the syncopation.

“We’re up in our little music retreat up here,” Welch says, breaking from the afternoon’s practice session. “We’re just north of the Yuba Watershed. It’s hot as hell right now, but we’re managing.”

The two have an upcoming show at Nevada City’s Chief Crazy Horse Inn on July 24.

Boca do Rio is the second band to be awarded the annual Davis Independent Music Initiative, or DIMI, grant. The committee that awarded it to them included last year’s winner, Davis musician Joel Daniel, of the Hoots. The grant is part of an annual effort to boost Davis’s music scene by providing one local band with funding. Daniel’s hope is that it offers musicians who might otherwise seek a career in Sacramento or the Bay Area the support they need to foster their talents closer to home.

“When there’s more places to play, people get interested in playing,” Daniels said. “In 1998, when I first got to town, it felt like I wasn’t a part of it at all. There were at least two coffee shop venues you could play at. Every night—Thursday through Saturday—at the G Street Pub, which is now Wunderbar, there was music. There were more places to play. All three of those places have disappeared since then and there’s no real venue in town.”

Daniel thinks more work needs to be done before young musicians developing in Davis will feel their talents are being fostered locally. Few restaurant owners have taken an interest in providing a venue to showcase talent.

“We have no places to have rehearsal space—like none—Zero,” he explains. “We have to drive into Sacramento, and it’s the far side of Sacramento for us. The people that play music here, they leave. There’s been no net to catch them in—to show them, ‘Do these things, don’t do these things.’”

Daniels adds that there has been one highlight in the college town: “Kevin Wan, who owns Sophia’s Thai Kitchen, has been such a champion of music over the years, and he pays bands really well.”

Boca do Rio was selected for the DIMI grant partly because of their pristine-sounding live shows that are packed with energy, as well as their track record for community involvement in Davis.

“We have big plans,” says Welch, the bassist. “We are going to make our third album. Most of the material is already written … We have some great guests on it.  We want it to clearly be a community effort. We’re going to absolutely match Joel’s spirit.”

Welch and Calatayud have been playing together since the mid ‘90s. Before they met, Calatayud moved to the Bay Area with his three brothers, bringing along a Brazilian musical style that was mesmerizing to music fans – including Welch.

“I think [we’ve played together for] 20 years,” Calatayud says. “I started when I was 14, in Brazil, professionally. Always the tambourine, percussion.”

Boca do Rio’s approach draws from evolutions in music that originates in Brazilian choro, which Welch describes as Brazilian ragtime. He also says their music traces the African diaspora. The band’s song “Africa” represents that sound because of its syncratic rhythms, which combine elements of samba, bossa nova, and choro music; and because of the song’s message.

“This is one where we really created our own swing, and it’s what we truly believe,” Welch says.
“The chorus says, ‘Every time I hear those beats, it wakes up a world inside of me because I remember Africa and Africa remembers me.’ This is basically talking about how all of our genes come from Africa. That song has its own rhythm that isn’t really Brazilian or American rhythm.”

For Calatayud, it’s the response from crowds that keeps him going, especially when he witnesses his music breaking down social barriers.

“Every time we go on stage or have a performance, the appreciation that all of the people have for our music motivates me,” Calatayud notes. “It’s so good to see people integrating [when we play].”

Similarly, Welch celebrates the fusion that overcomes a crowd when they’re in the throes of their performance.

“Brazilian music—it’s language, it’s people, it’s beat, it’s rhythm—is very accessible,” Welch stresses. “It’s different from all other Latin music. I think all musicians really crave when everybody is creative, and levitating, and everything you do, everybody’s there with you. Then it becomes a journey of listening,”

To qualify for a DIMI grant, winners are required to complete the new recording within 24 months. They must also host their work on a free streaming service (though they are able to monetize their newly produced music outside of this stipulation). The band must also perform their work once in Davis, at no cost to those attending, and must agree to work with the DIMI committee to continue development of the grant in the year following their award.

The funding for the DIMI grant comes from the City of Davis. According to Daniel, there were two funds such a project could have sprung from. One smaller grant is what he pursued when developing his initial proposal. The other grant has a higher threshold, which is how Daniel hopes to continue to fund the grant moving forward.

“I’d like to see that fund get up to $10,000,” says Daniel. “Then, you’re talking about not just making a record, but there might be some left for marketing and doing some other things.”

He adds, “I’m noticing through DIMI, there is this group of young kids that’s interested in doing this. There probably always has been, but I would love to see the band that receives this money using it to make something, and then use whatever they’re making for their living to just pay their rent and stay in Davis long enough to become a band that we could all just go out a few times a year and catch playing at a show … Then eventually, there’ll be a great band from town that we can all go out and be proud: ‘Hey, they’re from our town.’”