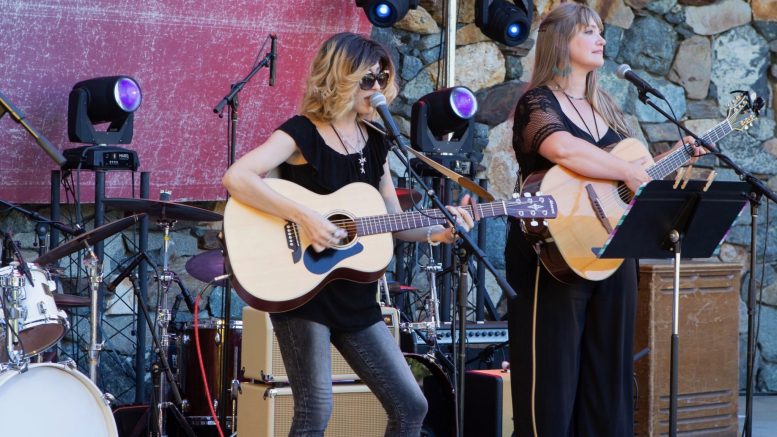 Sugar Mountain will be one of many acts performing at the Night of Giving music show in Grass Valley on Dec. 15. Courtesy photograph

The winter chill is here, but there are plenty of warm, sonically sensational spaces to head into as the Capital Region’s music scene heats up: Illuminated marquees from Downtown Sacramento to the hills of Grass Valley are previewing how the frigid nights will be countered by the fire of live performance. That includes dates showcasing rock, roots-Americana, country, folk and high-energy cover music. Below are a few upcoming highlights for December.

December 3 – Dirty Cello performs at The Sofia Theatre in Sacramento

The bluesy bravado of Dirty Cello will bring some string-slashing showmanship to Midtown Sacramento on Dec.3. Beginning at 7 p.m., fans can see singer-cellist Rebecca Roudman puts her noted dynamism on display while being accompanied by some of San Francisco’s best musicians. Roudman has been called “the Jimmy Hendricks of the cello,” though her versatile vocal approach is another lynchpin to the band’s ongoing appeal. Good Times Santa Cruz recently praised Dirty Cello for “the depth of soul in Roudman’s playing,” as well as handling “every style imaginable” within its repertoire. Dirty Cello’s Sacramento appearance comes in the wake of it lighting up stages from Iceland to Italy. The band’s show at The Sofia Theatre should sound especially good, as it’s considered one of the most acoustically pristine venues in the region. Tickets can be purchased here. The Sofia Theatre is located at 2700 Capital Avenue in Sacramento.

Sacramento’s army-of-two cover band will perform at the gateway to the Shenandoah Wine Country during Plymouth’s upcoming Holiday Market. Comprised of David and Meghan Albertson, the Albertson Duo is one the Capital City’s most active – and biggest-sounding – small cover bands. That’s thanks largely to David’s ability to loop sound live and play two instruments at once. Those skills, combined with Meghan’s smoldering vocals, have made the team a popular act at breweries and wineries across California. Plymouth’s Christmas market on Dec. 3 will have plenty of vino being poured from Amador County’s award-winning wine appellation, along with food, beer, hot cider, cocoa and mulled wine. Additionally, the event includes craft stands and horse and buggy rides for more winter ambiance. The Albertson Duo gets the festivities going between 4 and 7 p.m. Plymouth’s Christmas Market is one Main Street, Plymouth. The event is free to the public. Anyone who misses the Albertson Duo there can catch them live again on December 12 at the Raley’s One Market in El Dorado Hills from 11 a.m. to 2:30 p.m.

The rustic soulfulness of Midnight North will soon be ringing through The Crest Theatre. Considered one of the more exciting festival bands in California, Midnight North brings a mingling of backcountry authenticity and roots-Americana flare to each of its live performances. The group’s opened for the likes of Phil Lesh & Bob Weir, Jackie Green and Bonnie Raitt. This anticipated bill also includes the electrified, cool breeze-chemistry of The Golden Cadillacs, along with one of Sacramento’s favorite performers, the spirited songstress Jessica Malone. The three-act show on Dec. 7 starts at 7:30 p.m. inside one of the city’s most iconic venues. Tickets can be purchased here. The Crest Theatre is located at 1013 K Street, Sacramento.

The newly renovated Center for the Arts will host an evening of musical all-stars on Dec. 15 as it raises funds for Hospitality House, a Nevada County homeless shelter that assists struggling residents with employment outreach and health services. This annual event, which is now in its 17th year, is one that keeps the spirit of the holiday season alive in the hills. Beginning at 5 p.m., the five-hour extravaganza will feature the harmonizing power of Sugar Mountain, the scintillating singing of Artemis Arthur, the raw emotional intensity of Alasdair Fraser’s fiddle playing, and the bright, free-flowing folk sound of storyteller Sands Hall; all of this, plus fourteen other talented acts from the region. Tickets can be purchased here. The Center for the Arts is located at 314 West Main Street in Grass Valley.

The pure-rock evangelists of Sacramento will bring their flame-throwing amps to The Torch Club in mid-December. Led by veteran singer-songwriter Grub Dog Mitchell, Loose Engines is a band known for bringing an original and regional touch to some of America’s best high-octane musical traditions. Its Dec. 17 show will happen at one of fans’ favorite local venues, The Torch Club, during the legendary blues bar’s happy hour from 6 to 8 p.m. Mitchell confirmed to SN&R that Loose Engines will even be banging out some Christmas songs during this special performance. The 21-and-up show has no cover charge. The Torch Club is one of Sacramento’s longest-running, family-owned live music venues. It’s located at 904 15th Street in Sacramento.

Be the first to comment on "Round-up: Sacramento-area venues are stoking hot sounds against cold winds"