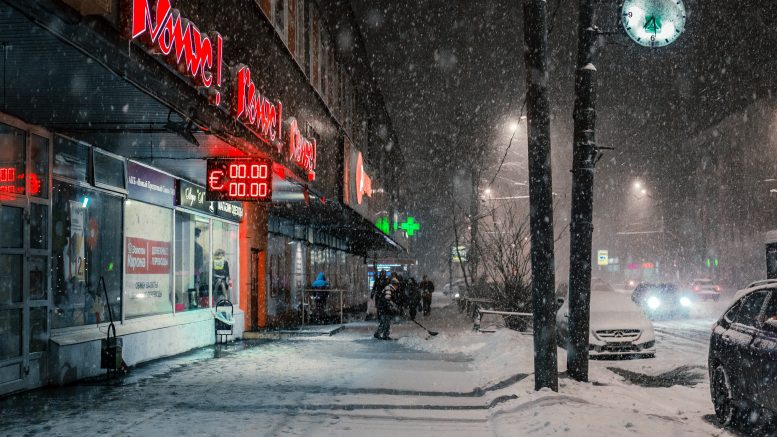 Moscow in the winter time. Photograph by Alexander Popov

In the fall of 1991, my mom and I went on a Friendship Force trip to Moscow. It was six years after glasnost—the unfreezing of the USSR as an authoritarian state—and shortly before the “Union” of Soviet Socialist Republics fell apart. It was a time of long lines at empty stores, people selling raw meat and books of poetry at subway stops, and gigantic tanker trucks parked in neighborhoods, where grizzled men lined up to fill empty pop bottles with a daily dose of vodka.

My mom then was younger than I am now and I remember how she riled when younger people offered her a seat on the bus. She insisted on paying her way even if, as an elder, she was allowed to ride for free. Currency was frozen and you could not get rubles from the bank, but our Amex card worked. Our hosts tried to keep us from buying anything. “Dreck!” they called the souvenirs we sought. “Dreck!” the Yiddish word for shit.

They were an aging Jewish couple who lived in a four-room apartment on the 15th floor of a multi-storied building, where only one of two elevators worked. Jews could not practice Judaism in Russia at that time, but that didn’t stop them from using Yiddish, the lingua franca of Jews everywhere in the world. Every night at around 11 p.m. we gathered in the tiny kitchen to eat salami and rye bread, drink vodka, and hear stories about family, life and change. As for politics? Not so much. A world apart.

My mom was a great believer in America. She was proud to pay taxes because she had enough to share and the government saw that help went to those in need. She believed in inclusivity, freedom of speech, and world peace. A Jew herself, she had lived through World War II and the Holocaust, Joe McCarthy, Father Coughlin and the anti-Semitism that kept our family out of certain neighborhoods and organizations. Still, she kept her faith in American democracy and never missed a vote.

I inherited my mom’s faith in elections. I know that our democracy is far from inclusive—that the vote is not equally available nor are the results of voting truly representative (thank you, gerrymanderers). Still, the vote is a start and, of late, that very vote is under attack.

I wonder if we are facing the unfreezing of our nation—and if we are, I tremble to think what comes next. Like 1991 Russia, we see empty shelves at stores, long lines and waiting lists for essentials like health care and food. Instead of drinking vodka, folks consume opiates. Our currency no longer dominates the world. Instead of vending raw meat at subway stations (our subways pale in comparison to Russia’s), we use Craigslist and other online markets to sell what we have to others. Apocalyptic fires, mass shootings, epidemics, infrastructure failures—you name it, all add up to mutual antagonism and a general loss of good will.

Despite all this, like my mom, I proudly pay my state and federal taxes and, with the similar zeal, I vote in every election. I am heavily invested in our democracy and our government. I have to believe that there will be a return on that investment. Wherever she is in her afterlife, I’m pretty sure my mom is cheering me on. I expect she would advise, “Pay your taxes, be sure to vote, and keep your faith in America.”

The author is a retired University of Georgia faculty member who moved to Northern California in 2018 to be near her grandchildren.

Be the first to comment on "Essay: Democracy and déjà vu"