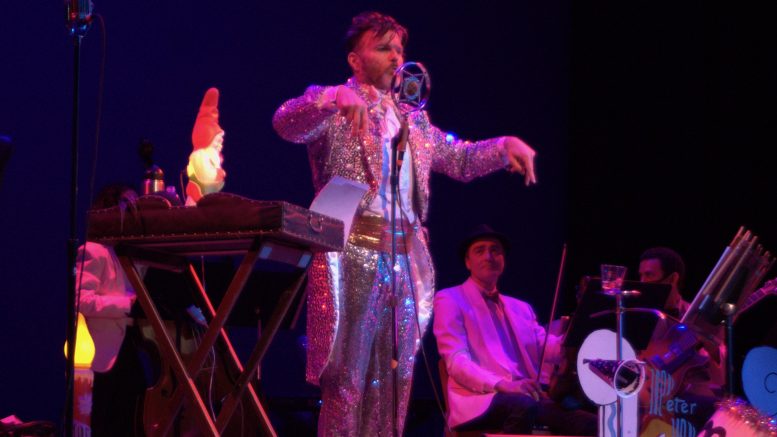 Peter Petty performs in front of a sold-out crowd at Sacramento's Sofia Theatre on Dec. 18. Photograph by Keli Rafter.

Under the lights of The Sofia Theatre, the Grinch stood stroking a long, green beard during Peter Petty’s Hepcat’s Holla’ Daze Swinging Yuletide Revue. Scowling at the crowd while Petty himself snickered near an 11-piece orchestra, the moss-colored grump wore a striped Santa hat and sported a knitted emerald phallus and gonads, swaying it all like the pendulum of a naughty grandfather clock.

Gasps and laughter ran through the audience as Mone’t Ha-Sidi’s take on the sinister Suessian stomped across the theater and Petty began belting out the holiday classic, “You’re a mean one, Mr. Grinch.”

Petty was soon posing as Jolly Saint Nick, prompting cheers as he ripped off a pair of red felt pants to reveal his sexy Santa shorts and matching tank top. Finding himself several layers lighter, Petty started to sing a track from his new EP “Hepcat’s Holla’Daze!”

The old school jazz dynamo has been a high-octane performer since high school. Petty boasts a 3 2⁄3 octave vocal range, having spent eight seasons with the Sacramento Opera before leaving to pursue a career as a swingin’ hepcat. His own talent aside, Petty modestly offered that his sold-out holiday show at The Sofia would be awfully boring if he did it solo.

“In one way or another, I look to all of [the musicians I work with] as mentors, really,” Petty told SN&R. “They’re all top mercenaries in the local environment. I must not be doing everything wrong because they keep on coming back to play with me.”

Petty first started arranging such raucous festivities at Harlow’s in 2015. This year, he was joined by a score of Sacramento’s brightest musical stars, including acts like the Freebadge Serenaders, Katie Knipp and Omari Tau. The bill also included performances from award-winning drag performer A La Mode, as well as burlesque favorites Jean Heart, Coco Lamarr and Sweet Belize. The show was put on by SBL Entertainment, offering Petty his first chance to play at the Home of B Street. He’d already had to cancel two planned shows there because of the pandemic. On this night, he not only made it onto the stage, but filled every seat on the house.

As-billed, Petty leads “Peter Petty and his Terpsichoreans,” a full, Calloway-esque swing orchestra. He chose the band’s name by studying the Greek muses – and trying to indulge in his own love of alliteration.

“Nobody starts with P, so I just went with a T – it rhymes with P anyway,” he chuckled. “Terpsichore is the Greek muse of lyric poetry. That’s as close as I could get to music or songs.”

One person who joined Petty on his blockbuster night at The Sofia was singing phenom Dana Moret, whom he teamed up with during last year’s holiday season to help the Torch Club, Sacramento’s long-time blues and jazz venue. The club put on a series of live streams called “Torched for the Holidays,” which found Moret and Petty exchanging banter and playing hosts to bands like Mind X, Tropicali Flames and the Michael Ray Band.

One thing was clear on Dec. 18 – artists seem to love performing alongside Petty. His various collaborators perk up instantly at the mention of his name. “How fun was that!?” exclaimed Katie Knipp as the Yuletide Review wound down. Knipp and Petty put on convincing Irish brogues as they performed a duet of The Pogues’ punk Christmas lament, “Fairytale of New York.”

Sacramento Blues Society winner Mindy Giles has been producing many of Petty’s shows for over a decade. Referring to him as a “master entertainer and singer,” Giles stressed that she loves living in Petty’s world.

“He shares his social justice soul through the lens of the Black American music he performs and draws from,” Giles said, “but there is more: living in Peter’s musical world is Ultimate-Torch-Cabaret-Americana housed in PeeWee’s Playhouse.”

Petty’s big night at The Sofia also included a burlesque element, a concept he started adding to holiday shows a few years ago.

“Mone’t Ha-Sidi, the burlesque artist, she’s been with me since that first show,” he recalled. “I always call her back because, man, she’s terrific! What a scintillating performer she is.”

Leading up to Petty’s extravaganza at the theater, he worked with Octopus Audio engineer and producer Zack Proteau to release his new holiday EP. He said restrictions brought on by the pandemic made finding studio space to cut the tracks for “Hepcat’s Holla’Daze!” problematic.

“That was at an ad-hoc, make-shift studio that we just put together at Ben McLara’s space,” Petty said of McLara’s classroom at Sacramento Music Preparatory Academy. “It turned out just so beautifully. Everybody is so eager to help and contribute to each other’s project. One thing the pandemic has revealed … is the dire necessity to work together and support each other.”

The new album was sold at The Sofia show and is currently available for purchase on Bandcamp.

Friends say humility pours out of Petty almost as readily as the sweat when he’s going into a frenzy on stage. Professing his love for Sacramento, he acknowledged that times are tough – and that cynics often begrudge a “kumbaya moment” – but he still believes that working in harmony as a community is what makes sense.

“In my particular circle, there is so much love and mutual support that I’m just undyingly grateful for,” Petty acknowledged. “We’re able to surround ourselves with truly beautiful, committed, loving human beings that also happen to be amazing musicians and technicians. It makes my heart lighter just to be a part of it.”