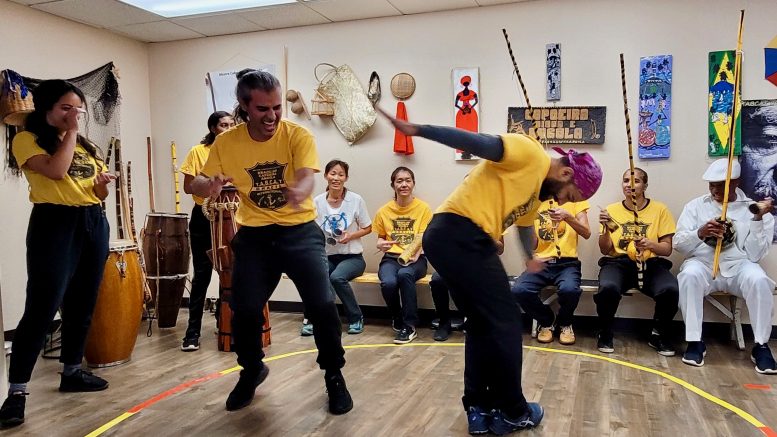 Mestre Caboclinho looks on at Casa de Brazilian as dancers enter the circle to perform a 500-year-old dance. Photograph by Keli Rafter.

From jazz, hip hop and ballet, to burlesque and Brazilian flare, the Capital City’s performers are getting on their feet again

On the right winter morning, a visitor approaching Old Sacramento’s waterfront can witness a spectacular snapshot that embodies the state of Sacramento dance. From the corner of Front and J streets, Greathouse of Dance can be easy to miss before its studio’s within earshot, but then one feels its brown roll-up doors vibrating to the beat of Mount Westmore’s song “Big Subwoofer.” With doors retracting in the warm daylight, the scene opens to reveal dancers inside popping and locking to the relentless music.

As the voices of E-40, Snoop Dogg, Too Short and Ice Cube carry from Greathouse’s studio to the old railway station across the walkway, a troupe of dancing waiters prepare to board the Polar Express for an upcoming holiday performance. Those artists belong to the Sacramento Contemporary Dance Theater, or SCDT, which was founded by Polar Express director Jacob Gutierrez-Montoya.

Dancers and choreographers in the Capital City often stress the importance of community building within the local dance scene. That’s because creating and maintaining connections proved especially valuable in the last two years due to the impact of COVID-19.

For years, Brandon “Knowbody” Greathouse, the hip-hop studio’s namesake and founder, has worked with dancers and musicians throughout the industry. In addition to the Sacramento studio he opened in 2018, Greathouse also operates a performance center in Truckee. Throughout his endeavors, his love for Sacramento remains unwavering.

“Sacramento is the best city in the world,” Greathhouse said. “We’ve been able to work with the city to get funding. I’m just making it a major priority to give back to this community.”

He’s not alone in that assessment. As co-owner of Folsom’s Hawkins School of Performing Arts and former instructor for Sacramento Ballet, Gutierrez-Montoya has had many opportunities to collaborate with, and incorporate, Sacramento’s diverse dance subcultures. From his perspective, the city offers an audience for every niche – and a niche for every dance fan.

“We’re all a part of this community; we all have our own branches that we grow on,” Gutierrez-Montoya observed. “A lot of dance groups have their own vision and aesthetic, which I think is the goal, so we can all be our own thing; but still be a part of the artistic greater good. You have Sac Dance Lab, where there’s a lot of Jazz or contemporary, then you have [SCDT, which] tells specific stories.”

In the initial months of the pandemic, stage performers experienced a global pause on their stage art. No one knew how long it might last. Despite the hardships, leaders within Sacramento’s dance world found opportunities to keep building community. Gutierrez-Montoya and his dancers created ways to engage with people in need. That included teaming up with other groups to help the Shriners Hospital for Children raise $300,000.

Choreographer and theatrical dancer Tracey Freeman-Shaw, a fifth-generation native to West Sacramento, has been dancing since she was two years-old. In March of 2020, she was preparing for the last few performances of “Chicago” with the San Jose Stage Company. It was a show Freeman-Shaw choreographed, calling it her “love letter to Bob Fosse.” On the proverbial eve of widespread closures, the remaining performances were ultimately canceled.

Mourning the same stagnancy lamented by Sacramento’s theater community, she added, “[Fosse was] one of my favorite people and to work on that show was absolutely intoxicating … I don’t see myself not having a what I call civilian job until it’s more assured that we’re all going to go back to work: Not just the heavy hitters, but regional theatre, Broadway, all the way down to community theatre.”

In college, Freeman-Shaw had connected with Jolie Roberts, long-time coach of the Sac State University Dance Team. Roberts says her experience on campus the last year-and-a-half has been similar. Following months without face-to-face practices and games, Sac State’s dance teams were able to resume practice last August with safety precautions, including requiring vaccinations and masks.

“We didn’t even have a season last year,” Roberts notes. “We tried to do stuff virtually. It just didn’t pan out because our job is to support the athletic [teams] … here at Sac State. That is far-reaching into the dance world at large. Studios had to go virtual. A lot of the local and national competitions were done virtually, which is hard.”

Roberts also spoke with frustration about a lack of options for adult dancers with a background in cheer once they graduate: “A lot of them have to go to L.A. or out of state,” she went on, adding that sports teams moving out of Sacramento and San Francisco have left her dancers fewer employment opportunities. “There needs to be a more cohesive dance culture that embodies, and really feeds into, each other.”

Several of the artists who trained under Roberts have gone on to perform with professional sports teams, including Freeman-Shaw, who was with the Kings’ Crew for a time. Another performer who followed that path is Sac Dance Lab’s founder and director, Isela Perez. Her connection with Roberts has allowed for a sort of symbiosis in which dancers move between Sac State’s dance team and Sac Dance Lab.

Sac Dance Lab was borne from a need for local pro-dancers working with sports teams to prepare during the off-season. Before its opening, some had to travel to Los Angeles or New York for that. In time, Perez’s lab grew to include classes for ballet, contemporary dance and an array of jazz and hip hop classes.

“We jokingly say we’re diverse by accident here,” Perez said. “We don’t necessarily cater to just one type of person or another. Somehow in the last five years we have built a safe place where people of all backgrounds can come dance — all levels, all ages. We consider it a huge strength in our community.”

The Jazz burlesque classes at Sac Dance Lab are a more family-friendly take on the style than what sometimes lights up Moxie Cabaret, a Peter Petty show or one of Sacramento’s gothic festivals. Overall, burlesque has been part of Sacramento for much of its history. Lately, several burlesque troupes and performers from the city are gaining prominence, causing a surge in its popularity.

One of Sacramento’s most active troupes, the Darling Clementines, began shaking their tail feathers 9 years ago when Cha Cha Burnadette, its founder, director and producer, moved to Sacramento. On Dec. 5, Bernadette, now a 15-year veteran of the suggestive dance style, hosted her first burlesque and drag industry night.

“The more we connect, respect and work together, we can find more opportunities, and build industry, and hopefully get more attention from our own city government or from grants,” Bernadette pointed out. “We make a lot of contributions, and we’re a big part of the monetized industry. My shows have been sold out throughout this entire year.”

Like the gradual exodus of sports teams, Bernadette has witnessed closures of burlesque and drag-friendly venues. In the days when clubs like Blue Lamp or the Starlight thrived, her dancers had more consistent opportunities to tease and please their audiences — an issue further impacted by COVID-19.

“Our community — our city — is not coming out and supporting enough to keep these venues and stages alive,” Bernadette stressed. “It was absolutely heartbreaking when we lost our first venue, Marilyn’s on K … and we lost Assembly. When there are only a couple of venues for us, that can make it a challenge to be able to grow without being competitive.”

Echoing Perez’s thoughts on the city’s individual dance niches, Bernadette added, “Some art scenes are already so-established, and it can be hard to get your foot in the door. Living in a place [like Sacramento] allows us to create our own individual approach and style without the influence of an established scene. Sacramento is great for that.”

City of a thousand dances

“It allowed a space for people from different cities and states and countries to perform in my shows without having to have the burden and cost of traveling,” Ha-Sidi explained.

When the popularity of virtual shows waned as vaccination and mask mandates changed, Ha-Sidi was sad to see the opportunity lost. She saw the writing on the wall: as venues opened, online viewership of the shows she’d produced dropped.

Regardless of how integrated virtual shows remain, the region’s dance community keeps expanding.

The martial arts-infused Brazilian dance style capoeira angola has eked out its own niche in Sacramento. Following the tradition’s 6,400-mile journey to the area, Mesrtre Caboclinho arrived in the Capital City in 2013 to establish the Casa de Brazilian Folkloric Arts of Sacramento. Caboclinho believes that capoeira, as a dance obsession, chooses who will practice it.

Several studios in the city — more often martial arts centers — offer capoeira classes. These styles are often taught as a means to stylize a student’s fighting style. Cabolclinho teaches Capoeira Angola specifically, which emphasizes disguising the fight in a dance or game.

“That dance was a disguise, so Portuguese slave masters wouldn’t see their practicing,” Cabolclinho explained. “What you’ll see is more art than fight. She’s a universal language. You don’t need to speak Portuguese to be able to practice her. In the circle, there’s only theatre.”

Casa de Brazil has developed a small but loyal troupe of capoeira players. The team has performed at cultural festivals, as well as in Davis’ Whole Earth Festival. According to Caboclinho, people and the communities they live in can only gain strength by celebrating each other’s cultural differences.

“Otherwise, we’ll never leave our homes,” he observed. “We’ll bring stress and a lot of bad things. When I moved to my neighborhood, I said hi to everybody, ‘Hi Neighbor!’ and they were like, ‘Who’s this guy? Hi?’ Today, everyone talks to me.”

Be the first to comment on "The magic of movement: After some pandemic falls, Sacramento’s dance scene is alive and spinning"