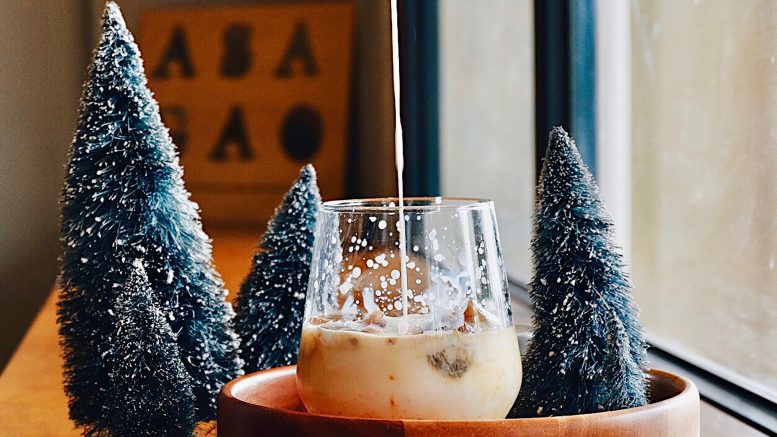 If music’s not your holiday jam, there’s always Jane Austin, magic realism and the Muppets

After the last two years, any vision of fun holiday memories can feel a little like seeing the Ghost of Christmas Past; but with vaccinations and booster shots abounding – and plenty of hard-won lessons on safety protocols – Sacramento will be hosting a number of events in the coming days to reclaim what some call “the most wonderful time of the year.”

Whether it’s powerful musical performances, imagination-inducing moments in the theater or just enjoying a snow-touched film classic in one of the city’s timeless movie palaces of yore, the Capital City is hoping to give locals their own Jimmy Stewart moment of running through the streets and celebrating their connection to friends, family and fellow members of the community.

Sacramento’s King of half-crazed Swing will ring-in the season with all the frantic energy of an out-of-control jazz Christmas. The Sofia Theatre describes its upcoming evening with Peter Petty as an old school holiday review with flashes of the Harlem Renaissance, classic and neo-Burlesque artistry and joyous celebration. For several years Petty’s swing orchestra has been charming the Capital City with its rock-like intensity, sterling showmanship and skill with bright, blaring brass. The group’s night at The Sofia will include guest appearances from Sacramento’s internationally chart-topping blues artist Katie Knipp; searing soul singer Dana Moret; operatic baritone Omari Tao; burlesque-inspired songstress Coco Lamarr and renowned saw-player from the One Flew Over the Cuckoo’s Nest, Robert Armstrong. The punk band Th’ Losin Streaks, Sacramento’s Element Brass Band, the jazz duo The Freebadge Serenaders and the burlesque artists Monet Ha’Sidi, Jean Heart, Sweet Belize and A La Mode will also grace the stage, along with the liquid-light-show raconteur, George Holden. The action-packed evening starts at 7 p.m. Tickets are $40 at: https://bstreettheatre.org

This week, SN&R profiled the Latino Center for Art & Culture, which at its heart is a story about how Sacramento’s vibrant Hispanic community is enriching the city’s overall quality of life through paintings, music, comedy, dancing, theater productions and heritage events that everyone is invited to. On Sunday, Dec. 19th audiences can enjoy a matinee of LCAC’s 8th annual La Pastorela, a musical comedy that blends political theater with cultural traditions. Tinged with magical realism, its story involves four modern-day shepherds living in Sacramento. Tickets are $15 at www.eventbrite.com/e/8th-annual-la-pastorela-de-sacramento-tickets

Need a hard shot of help with the holiday blues? One of Sacramento’s most uniquely popular acts will bring its fire-and-brimstone jazz jubilation to the stage at Harlow’s, allowing people to swing the humbugs right out of their headspace. In a recent profile on Tropicali Flames, SN&R introduced the group as “a sound from Sacramento’s past is roaring back, searing like a skillet and steady like a chain gang. It’s the power of wild, restless rhythms, boot-stomping bass struts—and one big shot of saxophone fire. From the dim tables of the Shady Lady Saloon to the crowded dance floor of the Torch Club, the sound is throwing heat on peoples’ foreheads while transporting them to the Capital City’s lost era of swing jazz.” Drop by Midtown Dec. 22 to see why Tropicali Flames has been such a standout act around The SAMMIES in recent times – and kill your inner grinch with some blasting blues and bourbon. Tickets are $15 at: https://www.harlows.com

Screening of ‘Muppet Christmas Carol’ at the historic The Crest Theatre – 7 p.m.

For some, Charles Dickens’ ghost story about hard times, haves and have-nots, and the need for yuletide compassion might be a little too relevant – and punishing – for the particular holiday season that’s upon us; but they can still swallow its general theme with a spoon of spiked eggnog by watching the Muppets handle its story. Starring the inconic six-time Oscar nominee and two-time winner Michael Caine, “Muppet Christmas Carol” offers viewers a zanier take on Victorian London’s slums, while still maintaining Dickens’ socially probing message. The film shows at Sacramento’s historic Crest Theatre the night before Christmas Eve. Tickets are $12 at www.crestsacramento.com/product-category/movies

Last month, SN&R featured the personalities and players associated with one of Sacramento’s most lauded music venues, The Torch Club. For 90 years this working-class, family-owned bar has been a staple for presenting blues, R&B and roots-Americana performances. This week, the Torch is treating locals to one more show before Santa’s sleigh takes to the sky, hosting a fat line-up on Dec. 23 that includes the energetic, free-wheelin’ jam band, Mind X, the smooth country crooner Geoffrey Miller and the scintillating Tennessee swing of Sweet & Low Melody Co. The Torch Club is located at 904 15th Street, and the cover at the door for this show is $10.

For those who are up for a live-action, more traditional take on Dickens’ “A Christmas Carol,” the Sacramento Theatre Company is running a handsome, elaborately costumed production of the holiday staple that’s directed by Miranda D. Lawson and Michael Laun. The cast includes Matt K. Miller as Ebenezer Scrooge, Casey McClellan as Bob Cratchit, Miranda D. Lawson as Mrs. Cratchit, Natasha Hause as The Ghost of Christmas Past – and a special appearance by Michael Laun as The Ghost of Jacob Marley. This warm stage spectacle is designed to sweep your into the spirit of the season. Tickets are $48 at www.sactheatre.org/shows/a-christmas-carol-4

Jane Austen has been called one of the greatest literary geniuses of the 19th century, and Sacramento’s Capital Stage is offering a transporting doorway back to her world on Christmas Eve with its production of “Miss Bennet: Christmas at Pemberley.” Lauren Gunderson and Margot Melcon’s inspired sequel to the masterpiece “Pride and Prejudice” finds one of the Bennet sisters, Mary, trying to highlight her individualism and ability to cross wits with those showing up to Christmas gathering at the Pemberley estate. SN&R writer Patti Roberts, who called Capital Stage’s original stab at this production in 2017 “a sweet, sassy sequel” and “delight and most-welcome reprieve in this season of endless holiday theater retreads,” recently penned a feature on how these players and their counterparts are staging a live-action comeback in the wake of the lockdowns. This Christmas Eve see one of Capital Stage’s first attempts to make that happen. Tickets are $32 to $42 at https://capstage.secure.force.com/ticket/#/events/a0S0y00000RfsKFEAZ

Screening of ‘White Christmas’ at the historic Crest Theatre

For those wanting some cheerful, wintertime nostalgia, the Crest Theatre has you covered on Christmas Eve with its presentation of Irving Berlin’s musical “White Christmas.” The 1954 classic starring Rosemary Clooney, Bing Crosby and Vera-Ellen was filmed in Paramount’s special VistaVision, a time-stamped color process that will be on full display once glowing across the big screen of the Crest. This story of two World War II G.I.s getting to know a pair of singing sisters as a snowstorm approaches has no shortage of ear-worm Christmas jingles you’ll be humming on your way back out to K Street. Tickets are $12 at https://www.crestsacramento.com/product-category/movies

Be the first to comment on "Sacramento’s upcoming seven days of jazz, rock, blues and bourbon for ushering in Christmas"