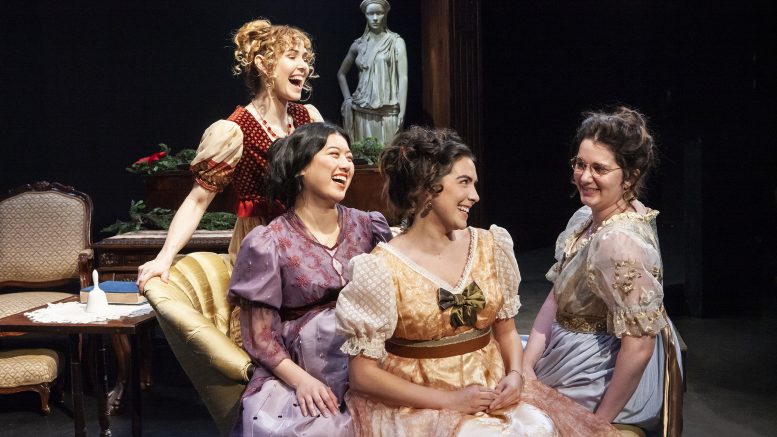 Local theaters are currently aglow with Christmas productions that celebrate the joy of the season; yet beneath the holiday cheer is a mixture of emotions – a theater community grateful to be able to finally stage in-person productions but still feeling the impacts from a year-and-a-half of COVID lockdowns.

The performing arts are one of the industries that’s been hit the hardest during the pandemic, forcing theaters to close down shop with little notice in March 2020. Many were in the middle of their spring season, some with plays mid-run, while others had to shut their doors on opening weekend. Theater managers initially presumed the shutdowns would only last a couple weeks before getting the green light to open again. No one could have predicted their stages would be dark for so long.

“We were in the opening week of Admissions,” Capital Stage Marketing Manager Misty McDowell recalled. “We had only performed one preview on Wednesday, March 11, 2020. By the end of the day, however, we decided to postpone performances for a couple weeks based on the news of the coronavirus rapidly spreading.”

Sacramento Theatre Company, or STC, was ending their run of Hamlet when the Governor’s orders came down to close the doors.

“We initially thought it would be a two-week closure and we would be able to finish the season,” said Executive Director Michael Laun. “Instead, it was the longest intermission in our history.”

After the first initial shock wore off, companies had to figure out how to survive in the undetermined long-run – improv theater in reality.

“We, like everyone else, were in a reactive mode, just trying to figure things out,” said B Street Theatre Artistic Director Buck Busfield.

B Street’s “The Sofia Tsakopoulos Center for the Arts” complex houses three separate theater spaces with more than 400 seats, as well as managing the B Street School Tour, which brings plays into the school setting.

“We immediately had to cut staff by 75% but were able to keep the remaining 25 percent on full payroll for the entire closure,” said Busfield. “Our actors were able to get some stimulus grants, and we were extremely lucky getting Paycheck Protection Program loans, shuttered venue grants, patron donations and a variety of others.”

Capital Stage and STC were also able to get some grants, loans and donations; and while these did not begin to cover the theaters’ overall expenses, the backup surely helped.

“Our donors came out in full force during the pandemic, we’re only here because of them,” McDowell said of Capital Stage. “2020 was a record year of donations for us, though 2021 has yet to reach any normal levels. We truly have been sustained by the various small business COVID loans, arts and shuttered venues grants, and by our fierce donors.”

“It helped us both keep the lights on and rebuild as we’ve come back this season,” said Lisa Cannon-Wheeler, STC HR and Finance Manager. “Our members and subscribers have stepped up and been incredibly generous with us.”

And in an industry that relies on creativity, imagination and innovation, many theaters turned to virtual on-line performances.

“It was a challenge to learn various editing, virtual ticketing, access software and broadcasting software we hadn’t fully used before,” McDowell acknowledged. “We did a total of five virtual performances, including a couple Zoom productions of Smart People, Ripe Frenzy and The Wickhams: Christmas at Pemberley: A Radio Play.

She added, “We’re so grateful now that we can offer virtual recordings in addition to our live staged productions for those who wish to have virtual access. This is something I hope the theater industry can continue offering. I truly believe it can only help us grow our audience and help cultivate future generations of theater fans.”

During the shutdown, B Street held over 200 virtual performances of sketch comedy, play readings, concerts, and a new series, Re-Imagine, which was dedicated to presenting theatrical voices by BIOC (Black, Indigenous, People of Color) artists.

Larger theaters were able to get by with some loans and support from patrons, but smaller theaters and community theaters have been especially hard hit. Though they, too, came up with some creative platforms to present productions as well as drama workshops.

“With our mainstage season on pause and uncertain, we jumped into the exploration of virtual content,” said Karen Bombardier, Artistic Director of Big Idea Theatre, or BIT. “We were able to produce a live virtual performance of Jasper, written by Sacramento playwright J.P. Malen, and a staged reading of Sputnik-5, written by one of our talented BIT company members, Thomas Dean. And we held a virtual Youth Workshop.”

“Being able to provide programming for the School of the Arts was so important to us, because with the kids being out of school and being so isolated, our education program was a needed outlet because everything was so uncertain in the world,” remembered Miranda D. Lawson, STC’s Young Professionals Conservatory Manager.

Now, theaters are opening up with live audiences by using safety precautions that include masks, proof of vaccination or proof of negative results. But, it’s still a challenge.

“Restarting the theatre has been one of the most difficult processes we have gone through,” said McDowell. “From upgrading our HVAC systems to meeting health requirements for a post-COVID-19 world, from reconnecting with our subscribers, establishing our safety protocols and procedures for staff, artists and patrons, to simply shoveling out the dust that had collected the theatre in the 18 months of quarantine, we’ve had to relearn, remember, and redesign how we do everything.”

Capital Stage is on its third production after opening back in August with Hold These Truths. Its players are now in the middle of their holiday special, Miss Bennet: Christmas at Pemberley.

Big Idea Theater reopened with their production of Small Mouth Sounds, and, according to Bombardier, “the community has expressed how excited they are to be back and how thankful they are for the safety measures.”

STC and B Street have also opened up with recent productions, including their current Christmas hallmarks, Charles Dicken’s A Christmas Carol and A Child’s Christmas in Reno.

The theaters are still going through challenging times, but are grateful for the support they have received, both monetarily as well as emotionally. All have received some pushback from a few patrons unhappy with the safety protocols in place, but overall theater goers, local actors and production teams – as well as nearby businesses such as restaurants who rely on local productions for customers – are happy to see plays being presented live again.

“There have been many changes and impacts,” said McDowell. “The most striking to me is realizing how important access to the arts is to a community for health and happiness, but also it became clear how economically important the arts are to every region … The arts and entertainment industry drives enormous economic engines, and we have been the first to shut down, and the last to re-open.”

She added, “As far as our staff and artists go, I can only say it has been very difficult. We did a few virtual projects during the quarantine, which was good to keep some folks working, but we still couldn’t support nearly the number of artists and staff we would normally.”

From Busfield’s perspective, Sacramantans have given their local theaters a chance to keep looking ahead.

“We’re so fortunate to have a loving and loyal fanbase,” Busfield stressed. “It’s taking a while to get back our rhythm, which we’ve still not fully hit. But every week it’s better.”

Be the first to comment on "Staging a comeback: Sacramento’s theaters fight their way out of ‘the longest intermission’ in history"