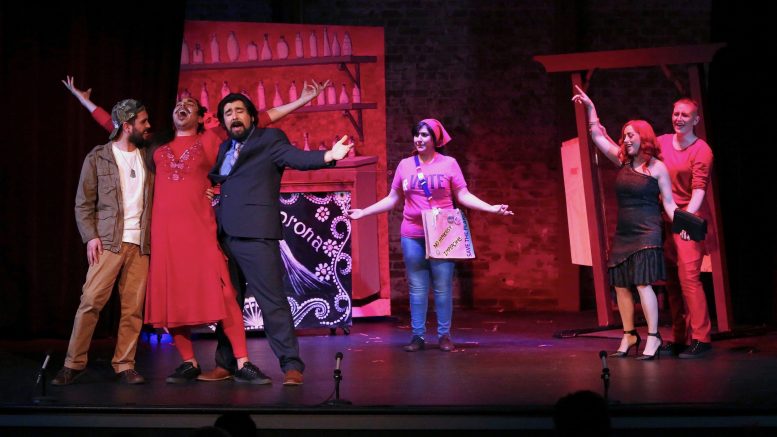 From the live stage to rare gallery spaces, the Latino Center of Art and Culture is connecting Sacramento with its past and future. Photo courtesy of LCAC.

LCAC looks to new horizons at Winn Park, hosts its La Pastorela this week at The Guild Theater

It wasn’t that long ago in Sacramento’s history when a group of Chicano university students recognized something was missing from campus galleries, student bookstores and even educational curriculum— a reflection of themselves.

This revelation came in the 1970s, during the height of the Chicano civil rights movement and in the wake of the East Los Angeles Walkouts, where thousands of Mexican-American students walked out of campuses en masse in protest of inequitable education.

In Sacramento, the college students decided to combat institutionalized discrimination by creating a space where they could gather and feel a sense of community through visual arts, while also preserving centuries-old traditions and encouraging cultural pride. That’s when La Raza Bookstore opened in 1972 near 12th and F streets.

“It really was courageous for these students at the university to come together and say, ‘We’re going to have a bookstore off-campus, and we’re going to get the books that relate to our history, to our art, and to our community,’” says Marie Acosta, board member and artistic director emeritus for Latino Center of Art and Culture. “And that’s how the organization started, as a bookstore. It immediately became the hub for activists, Chicanos, and it extended beyond Chicanos; but it was predominantly a Chicano-based bookstore that then morphed into a visual arts gallery.”

The bookstore was renamed the Latino Center of Art and Culture in 2014, yet at its core, the nearly 50-year-old institution has never veered from its mission of highlighting the voices and talents of the Latino diaspora.

Now, LCAC’s members look forward to expanding into Midtown’s Winn Park Building at 28th and Q streets, where renovations are underway thanks to a $1 million investment from this year’s California State Budget. Once complete, the art deco-style building that formerly housed a dispatch center for emergency fire calls will act as a secondary hub for the LCAC’s many workshops, art shows, and popular events like Fiesta de Frida – a celebration of the famed Mexican artist Frida Kahlo.

“It will be a community gathering space, and we’ll be able to use the outside park area for a lot of our programs,” Acosta notes. “We’ve also designated an area to become our research site to put our archives in and to have students and researchers access it. We don’t need to be in one facility to offer services to our communities. We can be in different facilities, we can rent a theater, we can be outside, we can be in a parking lot, and we can be in Winn Park.”

The center will continue to keep its primary location at 2700 Front Street, where it most recently held its El Panteón de Sacramento, a yearly event where artists recreate a candlelit Mexican cemetery, right down to the dirt mounds and colorful bouquets in honor of Dia de los Muertos.

The LCAC’s dedication to preserving those traditions and passing them on to the next generation is just one aspect that the current board chair, Carissa Gutierrez, says she instantly connected with when introduced to Acosta almost four years ago.

“Seeing the conversations that spur between an elder and a young child walking through an actual recreated cemetery, and talking about the role of death and life is incredibly beautiful,” Gutierrez reflects. “Being able to carry those traditions, teach them, and move them forward, it’s something we don’t want to lose. It’s the very least we can do is to make sure that there are spaces for people to feel safe, feel seen, and feel connected.”

Interior renovations on the Winn Park Building will continue well into 2022, but Gutierrez and Acosta say the center plans to host soft openings outdoors to introduce the LCAC to the surrounding neighborhood and to share future plans for hosting events like Dia del Niño, a celebration in tribute to children in Mexico that takes place every year on April 30.

“To have a space where Latinos can come together and celebrate, and really elevate their cultural experiences is something very beautiful, especially to find connection amongst people,” Gutierrez stresses. “Although we serve the Latino community first and foremost, truly, we bring in everyone. We see members of all different pockets come together, share ideas, and learn from one another. Without the arts or without culture, the city of Sacramento would just be like any other city. It’s the arts and culture that makes Sacramento distinctive, and different, and alive, and joyful.”

A touch of fun and magic when staging La Pastorela

While the LCAC awaits the finishing touches on its new Midtown location, it’s once again teaming up with the Oak Park Neighborhood Association to bring Sacramento its 8th annual La Pastorela, a play that blends political theater with music, comedy, and cultural traditions.

Starting Wednesday, Dec. 15 at 8 p.m. at The Guild Theater in Oak Park, a cast of LCAC board members, artists, and volunteer actors will perform their version of a traditional Mexican La Pastorela, a recreation of the nativity scene in the Bible. The LCAC’s version, however, leans on comedy, political theater and caters to multi-generational families delivered in Spanish and English.

“Every year, this play changes to speak about current events,” Acosta observes. “So, La Pastorela, it’s a musical about immigration and homelessness. It’s a morality tale that’s based on a centuries-old tradition in Mexico.”

The play begins with four modern-day shepherds living in Sacramento, and through the vehicle of magical realism, they’re transported over the border and have to safely cross back in order to save a family from deportation. Along the way, each shepherd encounters devils who try to tempt them and sully their journey.

It’s another way the LCAC blends into different neighborhoods throughout the city, sharing its love for Latino culture with all audiences.

The work is never done

With upcoming dual locations in Midtown and on Front Street, Gutierrez says she’s hopeful that its reputation as a multi-disciplinary arts center will not only span the ages, but also show the city, and the world, all the rich artistry within the Latino community that’s not often displayed in surrounding galleries.

The work is never done when it comes to running a nonprofit arts organization, but through the decades the LCAC has evolved from a small bookstore on 12th and F streets to a force that continues to fight discrimination, is proud to be Brown, and will stand up not just for Latinos, but for all BIPOC communities who want to elevate their cultures through the arts.

“There isn’t a way for me to walk in this world without in some way, shape, or form carrying that picket sign, or being a voice in a march,” Acosta admits. “The arts just has to be a part of that social change. I believe we are a very potent tool to change, to making the world a better place, to equalizing the voices of the voiceless to the powers that be, to say that we are an empowered community, that we have these longstanding traditions that make us unique, and should be valued. That has propelled my work in the arts since I was 18 years old — and I’ve not looked back.”

Be the first to comment on "¡Viva la cultura! Sacramento’s Latino Center of Art and Culture brings new life to a landmark, continuing its vital celebration of heritage"