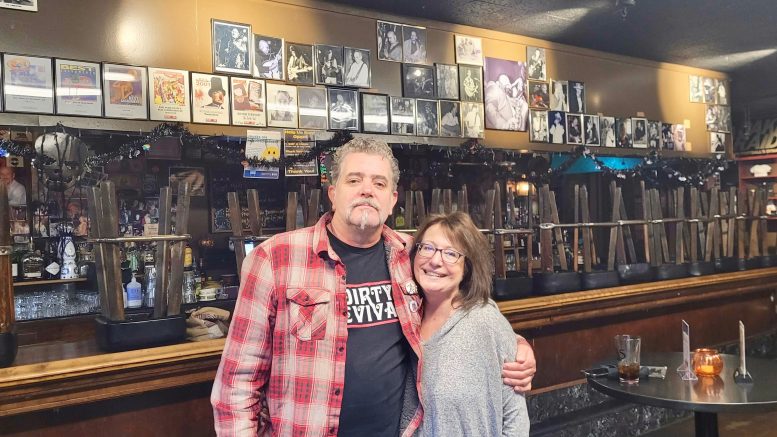 While on a visit home from college in 1987, Marina Texeira had a “very short-lived” first experience working for the family business: She waitressed that summer at Sacramento’s long-standing music venue, the Torch Club, a bar that her grandfather Frank Texeria had purchased in 1969.

Since the end of Prohibition, the Torch Club has been the Capital’s most reliable and consistent stage for local and touring blues, folk and Americana bands. After Frank’s death in the early 80s, Marina’s parents Ron and Evelyn took over ownership, later moving the bar to its current home at 904 15th Street in 2000. In the mid-1980s, the second generation of Texeiras saw competing venues close as they became the de facto showcase for blues music.

When her mother died in 1996, Marina’s father struggled to manage and book the Torch’s live music. Marina began stepping in to work alongside him at the venue.

“I would jump in and help with the bands, bartend, fill in — just kinda help where needed,” Marina recalled. “My mom had passed away and my dad was trying to do it all himself; but she was the business sense.”

Though Marina gained a lot of experience over the years, the pandemic was something she didn’t have a playbook for. Last June, as vaccination distribution increased and businesses throughout Sacramento began to open up, Marina was hesitant to allow things to return to normal. She also didn’t think the Torch Club could survive another prolonged pandemic shutdown. Marina ultimately made an eyebrow-raising decision for the safety of her employees and patrons: In addition to wearing a mask, customers would also have to show proof of vaccination to gain entrance. City Hall applauded her. She’d been the first venue-owner in Sacramento to make the move.

“I started seeing people I knew getting [COVID-19], and knew people who were dying,” Marina stressed. “I didn’t want to be a super-spreader. I could see the writing on the wall that they were going to require masks. I just wanted to be ahead of the curve.”

Requiring masks didn’t cause nearly as much of a response as asking customers to prove they’d taken their dose of the vaccine. Marina says the calls, emails and social media comments criticizing her choice were often harsh and either anonymous or — from what she could tell — didn’t come from her customers.

“In the beginning, it was scary – death threats and crazy shit; angry people,” she said. “Really violent, aggressive stuff. Once we made that decision, we couldn’t turn back, and I think as other businesses hopped on-board across other cities with regulations, people seem to be on-board for the most part.”

Marina noted that a small group of her younger customers have been resistant, but true music lovers are less reluctant to prove their vaccination status because of how much they crave seeing a live act.

“You have to have it to see a show at Memorial or at Downtown Commons,” she noted. “Now that they have it, it’s a little easier for us.”

The club with the genuine love

Beth Reid-Grigsby has been singing at the Torch in various acts since 2007 — most notably in Red’s Blues, the band that she and her husband founded in 2012. Red’s Blues’ concept of emphasizing guest players has now brought the sizzling likes of Rusty Zinn, Mark Hummell, Steve Froind, Aki Kumar and Johnny Lodden to Sacramento.

“The first place Red’s Blues did a show was there,” Ried-Grigsby said of the Torch. The singer’s history with the club started decades before her first singing gig. In 1990, while visiting Sacramento, she was on a hunt for a “neighborhood blues” venue. She found that and more when she arrived at 904 15th Street.

“I met Marina, then, when I wasn’t even living here yet,” Ried-Grigsby recalled, adding that Kim Duvall was there, too, a popular Blues Society member who died in 2019. “I met those people, and little did I know how big a part of my life Marina would become over time.”

Marina and her partner Mark Mitchell, talent booker at the Torch Club, both commented on a noticeable shift in how people interact with each other in recent months. The mood isn’t all sour, though. Mitchell acknowledged that some customers express gratitude for the robust safety requirements.

“This is our business, and we have to stay open, so we have to do it as safely as possible,” Mitchell said. “We’re kind of like a canary in a coal mine,” he added, gesturing behind the bar. “We’re here always. If we’re not contracting it, we’re doing a good job at keeping it safe. People appreciate it.”

Reid-Grigsby, who played at the Torch Club in October, supports Marina’s approach.

“I’m not going to put my band in jeopardy or in harm’s way,” she remarked. “That was the only way that I wanted to play there, knowing that everybody in the room was vaccinated … I really like that she started that, and we had a pretty decent crowd because of that.”

Dana Moret has similar feelings. The Sacramento singer began performing at the Torch with the jazz band Mr. December in 2012. She eventually grew into a role working with Marina, managing the venue’s social media and acting as a publicist for it. She says that, even though employees at music venues may come and go, Marina always made an easy connection with her staff, to the point they felt like family. In her experience, Marina’s compassion keeps her employees loyal.

“It’s a reciprocal thing. That’s true of any employees that she’s ever had, really,” Moret observed. “During the shutdown, even though she obviously lost her income just like we all did … she’s just been a great support system … having us come back, keeping in mind the safety of her employees, the artists and the customers, with respect to the new COVID protocols. Also, throughout the years, she’s always been the champion of crowd-funding and using her influence as a long-time staple in the community, to help others in all different aspects.”

From Blues to Roots

In the decade Mitchell has planned shows for the Torch Club, he’s worked to grow beyond the club’s original foundation of hosting blues musicians. It still strongly features that original American art form, but also books soul, jazz, funk, roots and R&B musicians. In October, Sacramento funk players Miggy and Friends played with the Backburners, bringing a unique element that Mitchell said wouldn’t have gone over as well in the years leading up to the pandemic shut-down.

“Miggy is a phenomenal horn player. They played the vibes on stage,” Mitchell explained. “I was amazed. There were like 200 people that came through just groovin’ on it. There’s a different thing in the air. People are down for good-sounding stuff. Four years ago … it would have been a different vibe.”

When Marina opened the club back up in June, Mitchell had updated its stage and sound system. He promptly began scheduling two acts a night, Thursday through the weekend, only closing the bar three days each week. He hopes to put an end to the hiatus some musicians have been stuck in.

“A lot of bands [are] out there and they want to play,” he said. “They’ve been itching and doing a lot of woodsheddin’. Some of the guys tell me they haven’t played in 16 months … I can hear that they’ve been practicing somehow cuz they’re ready to get up on stage.”

Forever Goldrush, a band that’s enjoyed a long history with the Torch Club, will be performing there Nov. 20. They’ll be joined by a full night of music from Natalie Cortez, Loose Engines and a band that Mitchell himself played in almost 20 years ago, Simon Feck.

Damon Wyckoff and Josh Lacey from Forever Goldrush sat down with SN&R to talk about how important the Torch Club has been to each of them. According to Wyckoff, Mitchell’s band Simon Feck played many of the same gigs Forever Goldrush played throughout the mid-90’s.

“We go back with those folks a long way,” Wyckoff admitted. “The first time I stepped foot in the Torch where it is now was not as a performer … probably 1999. I remember watching Little Aaron King play there, Johnny Knox, Chromatics.”

Both Wyckoff and Lacey agree about the sense of gratitude when standing in the same place thousands of other local and touring musicians have “done their thing.” Lacey added that performing at a venue with such a rich history makes the Torch Club a melting pot for all of the region’s great genres of music.

“Mark and Marina, with the Torch — it’s a pillar of Sacramento music,” said Lacey, who, like Moret, has noticed all the close-knit connections with its staff. “It always feels like family there. They’ve just been there for years and years, so you get a rich sense of history when you go into that place.”

For Wyckoff, playing at the Torch Club brings a communal sense of appreciation with the venue, the crowd, and the performers.

“The funnest is always walking on that stage and getting feedback from Mark and Marina from the bar,” he laughed. “The wink and the nod that the show is great and everybody’s having a good time. You turn around and there’s somebody handing you a beer when you’re in the middle of the set. That’s how I remember all of those Torch Club gigs. People are focused on the music. They’re also there to unwind and enjoy each other’s company.”

He added, “It’s like this blend of friends and neighbors and also folks that just love music – and we’re gonna play our ass off for them.”

Moret sees and feels the same energy in the place.

“Mark and Marina are very eager to give people a shot and help cultivate and grow their crowds,” she said. “It’s just such a jewel in a local venue and one that cements the music scene as a whole in the community. Marina, she’s a leader in that.”