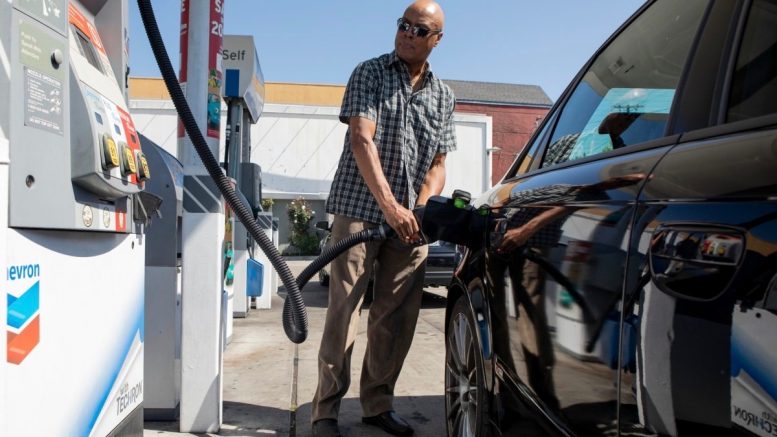 Day-to-day life is getting more expensive in California, which already has a higher percentage of residents living in poverty than any other state in the nation when the cost of living is taken into account.

Gas prices shot up a jaw-dropping 49.6%, with California snagging the title of the nation’s most expensive market. A gallon of gas cost an average of $4.63 in the Golden State on Wednesday, with some cities — including San Francisco, Oakland and Sacramento — notching their highest-ever recorded average gas price in the past week. But it isn’t just gas: Californians are paying more for goods ranging from food to used cars to electricity. In the Bay Area, for example, home electricity costs 9% more than it did last year, and price tags for meat, poultry, fish and eggs have jumped 14%.

The rising cost of living presents a challenge for Gov. Gavin Newsom, who touted California’s economic prowess Tuesday and said residents are “going to have good news coming soon on next year’s budget surplus.” But, despite this year’s record-breaking surplus — much of which Newsom and state lawmakers invested in safety net programs — a whopping 69% of Californians told the Public Policy Institute of California they believe the gap between rich and poor is widening in their region.

Economists say rising consumer prices are partly due to ongoing supply chain backlogs. On Wednesday, 78 container ships were waiting to unload cargo at the Los Angeles and Long Beach ports, up from the 58 idling in mid-October, when President Joe Biden announced the two ports would move toward 24/7 operations. But officials said their plan to start charging shipping companies on Nov. 15 for leaving containers too long at the ports appears to be working: More than 10,000 boxes have already been cleared from the docks.

And in an effort to address the shortage of drivers transporting goods away from the ports, the California DMV announced Wednesday it will nearly double its capacity to conduct commercial driving tests by offering them at more locations.

California has administered 54,700,680 vaccine doses, and 66.3% of eligible Californians are fully vaccinated. (This percentage fell due to children ages 5-11 recently becoming eligible for the vaccine.)

TOPICS:Cost of living in California

Be the first to comment on "Gas, electricity, food: Cost of living skyrockets in California"