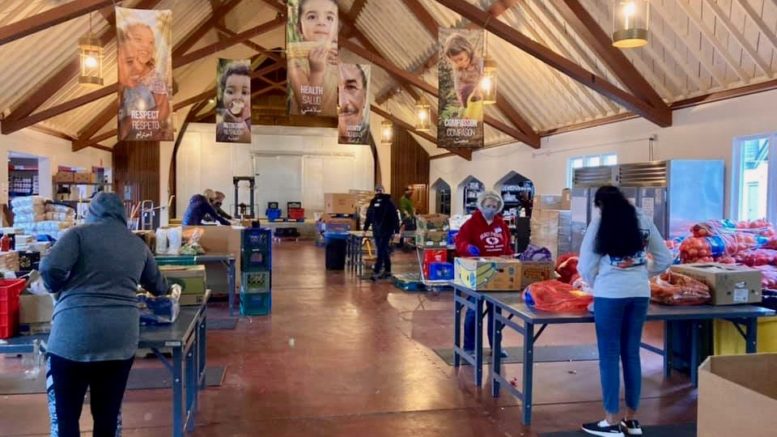 The pandemic has caused millions of people to lose their jobs, with many forced to make the difficult choice between paying rent or buying food. In that respect, COVID-19 continues to highlight the food insecurity problem so many in Sacramento are facing.

Not having enough to eat is linked to a poor mental and physical state. It’s estimated that in 2020 food insecurity affected 43%(174,000) of adults and 42% (63,000) of children in low-income households within Sacramento County, according to Nourish California, a nonprofit food policy advocacy organization.

As a result, people are turning to hunger relief organizations throughout the area to get their food. These organizations have expanded their distribution and are working overtime to serve as many people as possible. One example is River City Food Bank: the pandemic has forced it and its counterparts to change the way they operate.

Amanda McCarthy, Executive Director of River City Food Bank, said her organization had to shift into health and safety mode quickly. Before COVID, the food bank would offer a shopping experience, where people could choose what they wanted. Due to CDC guidelines, the food bank switched to pre-packaging all of their products and distributing outside.

“I think that was the piece that was the biggest change for us, is we really had to pivot and completely redo and rethink, reimagine our operation,” McCarthy said. “But now that we’ve done that, we’ve actually become pretty efficient.”

According to River City Food Bank’s 2020 community impact reports, it has served over 200,000 people, which is a 30% increase from 2019. It distributed more than 2 million pounds of food in the same window of time, a 13% increase from the previous year. That equals over 2 million meals served. Additionally, River City’s Midtown and Arden-Arcade locations have been feeding more people.

“We saw an increase overall of 30%, but I think it was a 69% increase at our Arden-Arcade site,” McCarthy said. “We actually increased our days of operation over there, which is one of the reasons it was so significant…. we’re serving roughly 300 households and that’s the equivalent of about 1,500 people on any given day.”

The Arden-Arcade location serves a large number of refugee families from Afghanistan, Russia and Ukraine.

“We also try to have culturally appropriate foods on hand,” McCarthy said. “So, halal meats, rice, and grains, some of those things that are more familiar and really some of the things that the community asks for. So, we buy those as well.”

Food insecurity will likely remain a major problem, according to McCarthy.

“The effects of the pandemic on food insecurity will be with us for the foreseeable future,” McCarthy observed. “And that is really because so many people have lost jobs and depleted savings, and it’s just going to take a long time for people to crawl out of that hole, it’s going to take some time.”

He added that he anticipates the number of people needing help to continue to increase for the remainder of 2021. As of right now, River City is serving between 15,000 to 20,000 people per month.

Bobbie Wooten, president and founder of Feed Sacramento Homeless, said her organization has started to pre-package their food and deliver it to people who are living on the streets. The group was feeding 1,000 people per week at the height of the pandemic, but they lost some food distribution contracts and that number recently dropped to 600 people a month.

“When that first round of COVID-19 money dissipated, they didn’t find a refund, any food distribution contracts,” Wooten said. “So, these same individuals, that thousand-individuals-a-week who are used to us coming – providing these meals and water – now don’t have that resource. So, once again, they’re left high and dry trying to figure out ‘how are we going to eat?’”

Wooten and her organization are still doing the best they can, despite the challenges.

“We’ll always serve food because it’s one of the biggest needs in the world, but of course, in Sacramento, why should anybody be hungry when we have all of these resources?” she stressed. “We have all this surplus food you see in addition to what we have in our home.”

She added “So, the reason I continue to go back to the food part of it, is because without a meal, if you’re hungry, you can’t even begin to think about becoming self-sufficient.”

Loaves and Fishes also had to modify its food services for those who are homeless. They now pre-package their breakfast and lunch meals. Because of Covid-19, the change in meal distribution and the CDC’s requirement to stay in encampments, less people are going to Loaves and Fishes now, according to Advocacy Director Joseph Smith.

As hunger relief organizations continue their work, the public has stepped up by creating communal food-stops, such as public refrigerators and sidewalk pantries. Smith said these efforts are essential during tough times.

“I think that there needs to be recognition that those things are necessary in our communities,” Smith noted. “Little public food lockers have cropped up through the Midtown area, I know. I think when they do crop up, they need to be seen as help.”

He thinks there also needs to be a greater awareness of Sacramento’s food deserts and how farmer markets might help.

“I think recognizing areas that are food deserts, is going out and trying to attract businesses that are going to be able to serve in that area. It’s a big deal,” Smith said. “Promoting farmer’s markets in that area and locally grown produce and things like that. That’s another big thing that local politicians can really help promote in their districts.

On the other hand, as Wooten points out, if politicians remove the “red tape” for nonprofits, they might have more resources to do sufficient work.

“Put more funding out there for the grassroots organizations, do not make it so hard for us to access those funds, and let us get out here and do the work that we love to do, that we understand how to do,” Wooten said. “We know what it takes.”