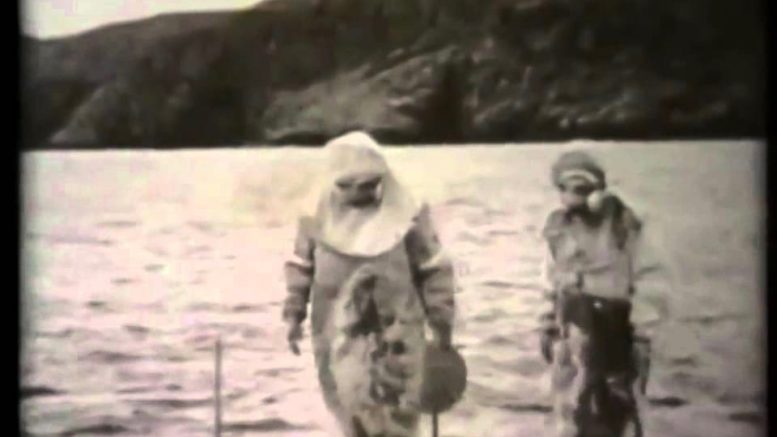 A once-secret archival photo from Operation Cauldron off the Isle of Lewis.

Since the eve of the Victorian era, writers have taken their gnarled knowledge of human instincts and channeled it through imaginative tunnels that go boring into the future, each author pushing themself into a kind of Delphian trance that hopes to glimpse some soon-approaching darkness.

It’s an especially rich tradition in Britain: In 1816, Mary Shelley had a nightmare about the mangled, mutated horror that might be birthed by reversing death through science, which she infused into her transgressive novel “Frankenstein; or, The Modern Prometheus.” Seventy years later, a weak and feverish Robert Lewis Stevenson was driven from his sickbed by the vision of a chemist altering his mind and body in unnatural ways. Gripped by the grotesque face he’d conjured, Stevenson began writing “The Strange Case of Dr. Jekyll and Mr. Hyde.” Six decades after that, George Orwell foresaw how a new, hive-like technology could erase historic fact and neutralize the concept of truth, lulling entire societies into barely noticed forms of mind enslavement. This warning, which grows more validated by the day, was the centerpiece of Orwell’s dystopian book, “1984.”

These wordsmiths were mining prophetic possibilities that now seem like little more than inevitable confrontations for our species. Donald S. Murray’s new novel “In a Veil of Mist” explores a similar existential crossroad, though it takes the opposite path to get there. The Scottish writer’s cautionary look at biological tinkering didn’t come from some doomed future he was dreaming, but rather from an all-too real and disturbing bit of history.

“In a Veil of Mist” was inspired by a highly shrouded British military mission in 1952 called Operation Cauldron. It was a secret Cold War effort to study plagues as potential weapons – and it very nearly sparked a pandemic in the rural Hebridean islands that Murray grew up in.

“In a Veil of Mist” is poignant meditation on loneliness, self-questioning and the broader blankets of foreboding that sometimes fall over the world.

Readers in the United Kingdom already knew about Murray’s gift for evocative passages, as he was an accomplished culture and nature writer even before his debut novel “As the Women Lay Dreaming” was published three years ago. That tale was inspired by the tragic 1919 shipwreck of HMY Iolaire, which happened in the same windswept corner of Scotland that has fueled so much of Murray’s writing. The Iolaire was carrying WWI veterans back to their home on the Isle of Lewis when it struck a rock near the harbor. Murray’s reimagining of how Lewis dealt with witnessing 200 souls get swallowed by the wrathful waters drew praise from the U.K. to the U.S.

“As the Women Lay Dreaming” is a Hebridean story with universal insights, but Murray knew there was another saga associated with the beaches and boglands of his home that offered the same – and it too involved a British military vessel. Operation Cauldron was a secret effort to refine germ warfare by purposefully infecting monkeys and guinea pigs with brucellosis, tularaemia and bubonic plague. These experiments were carried out on the Royal transport ship Ben Lomond, which was hovering in the waters just off of Lewis. Given that this part of the western isles has some of the least-populated shores from Scotland to Cornwall, the Ben Lomond’s risky activities – and the chilling accident that happened onboard – stayed under wraps for decades.

But Murray told SN&R that doesn’t mean the islanders themselves were completely in the dark.

“I heard the story in school,” he said this week. “More whispers than informed comments. Despite this, there was an awareness that something strange had occurred at that time on the edge of our community. Nothing, after all, is truly private or secret in a small village … The answers were sufficiently vague to arouse my interest and curiosity.”

Digging into the episode, Murray began writing “In a Veil of Mist’ before the COVID-19 crisis started unfolding. He was well into the later chapters of the book when the scope of the world’s situation became clear.

It’s obvious from the novel’s opening that Murray is not trying to suddenly capitalize on news headlines: Its scenes bear the mark of a craftsman carefully threading a believable sense of mystery through lucid, intimate portraits of solitude and privation. The book’s characters are deeply drawn, while the open untamed landscape they inhabit comes alive through an effortless poetry in the pages. These settings and people seem to put a natural wind-force in Murray’s sentences, but it’s a stride he hits without ever romanticizing how hard it was in the 1950s to live along those wild Atlantic seascapes.

“I would hope that readers gain a sense of how small communities existed at this time in history and how they dealt with events that marked and marred their recent past,” Murray reflected. “They had, after all, suffered two world wars, a terrible sea disaster which affected them for years, and a period of economic depression and emigration. Yet despite this, they managed to cope and continue, drawing strength from their own distinctive faith and culture.”

Given the indomitable streak in Lewis’s people, it angers Murray that British authorities chose to put them in harm’s way during Operation Cauldron. His vivid rendering of characters who live on the island put a human face on what could have been Cold War collateral damage. This is ultimately what elevates “In a Veil of Mist” to an achievement far above a novel that happened to be well-timed for a pandemic.

“Governments will often use areas that they consider ‘remote’ for deadly experiments like these,” Murray noted. “It’s as if they regard life –whether human or animal – as being cheap and lacking in value in such locations.”

In recent weeks, as more scientists and journalists have started openly reexamining the possibility of COVID-19 having been sparked by an accidental laboratory leak in Wuhan, China – and made more terrible by controversial U.S.-funded research that enhances viruses in order to predict their behavior– Murray acknowledges it will be hard for readers to ignore the parallels with his novel, regardless of whether the lab theory remains a hypothesis.

“But again, this is accidental,” the author admitted of the timing.

Accidental or not, the fact remains that uncharted virus research is splitting the scientific community at the moment – see journalist Josh Rogin’s new book “Chaos Under Heaven” – and it involves work being carried out at the origin point of the current pandemic. Questions of what did or didn’t happen there two years ago are gradually less haunting than those of what could go wrong there in the future. In that respect, Murray’s artfully told tale is both a study of the human condition, and a look at the conditions that could ravage humanity.

Scott Thomas Anderson is also the host of the ‘Drinkers with Writing Problems’ podcast, Episode 2 of which features an interview with Donald S. Murray about his previous work. The series is available on iTunes, Audible, Pod Bean and Stitcher.

Be the first to comment on "Playing with plagues: ‘In a Veil of Mist’ mingles the timely with the timeless"