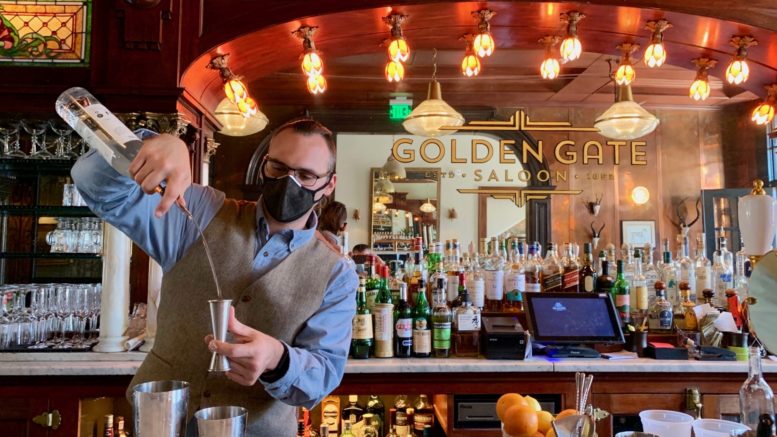 The neo-prohibitionists are back, using COVID as a Trojan horse to sneak their proverbial bottle hatchets into our favorite spots.

Even before the COVID-19 crisis, I would get a lot of questions from the public about alcohol. They started after I wrote a documentary podcast series about the link between artistry and various drinking cultures – and how the booze-fueled heartbeats of great cities can play a role in audacity and inventiveness.

After traveling the U.S. and abroad for that project, I heard from people interested in how far the argument can actually stretch. The reaction to “Drinkers with Writing Problems” ranged from some listeners identifying with its tales of whiskey-charged, full-throttle self-expression, to others expressing skepticism that the mystique of the solitary, hard-drinking creator is worth, in some cases, gambling with relationships and healthy livers. For me, the podcast still isn’t about which dead writers held their liquor best, but rather which kinds of watering holes breed true inspiration. And not just the ingenuity of wordsmiths. It’s a search for those spaces where musicians find their force, where photographers find their shots, where painters find their glimpses, where bartenders find their mixing magic. A pub is a stage for the big chances California artisans keep taking. It’s a proving ground for independent distillers, brewers and winemakers who are putting it all on the line.

Most of all, when we gather around a bottle, whether in a tavern, café or backyard, any person – artistic or not – has an opportunity to advance the art of conversation. They have a chance at generating a force we badly need right now, camaraderie.

All of this is worth remembering as America’s neo-prohibitionists try to exploit our current black swan event in order to demonize the grain and the grape, and to push for more regulations on their consumption.

So, who are these temperance time travelers? They’re the sobriety-scolds who currently demand the U.S. government reduce its recommended guidance for daily alcohol intake. They’re the finger-pointers now pushing for higher taxes on libations, as well as tougher restrictions on where they can be sold and drank. They’re the gray-faced teetotalers lobbying to lower the already-low blood-alcohol threshold for driving. In essence, they’re self-appointed reformers hoping to impose a pseudo-health theocracy to rule with the kind of iron fist already hammering Utah and the nine states that have “dry counties.”

They’re also the holier-than-thou types who just compelled President Biden to mercilessly purge the White House of anyone who’s smoked a doobie.

Polls show the neo-prohibitionists have been on the losing end of public opinion for a while. But the nebulous nature of the pandemic, which has included mandatory bar closures, has rallied these joyless crusaders back into the fray, emboldening them on a level not seen since the era when the temperance firebrand Carry Nation charged hysterically through saloons smashing bottles with her hatchet. Think about it: An entire year of people being trapped in their homes, locked in online worlds where overly rushed health reporting drives the news cycle, where social media encourages combative armchair epidemiology, and where state and local governments keep making unprecedented interventions in people’s personal lives. It’s a neo-prohibitionist’s dry wet dream.

Since the C.D.C. acknowledges bars will eventually return to normal, the main strategy to portray alcohol as Satan’s lovely elixir has been sharing news pieces about Americans drinking too much during the pandemic. It’s sadly ironic that there is an accelerated addiction epidemic that coincides with the lockdowns, which SN&R has reported on, but it’s not alcohol-related – it’s scores of people dying of fentanyl overdoses. Rather than dig into that story, some reporters have decided it’s easier to bait for clicks by pearl-clutching over Jameson and Pabst Blue Ribbon.

Bill Easton, an award-winning winemaker who grew up in Sacramento, has noticed this questionable trend. Easton was a founding figure in California’s Rhone Valley wine movement in the mid-1980s, and after 40 years of pouring vino to relax friends and strangers alike, he’s not surprised by the narratives floating in our newsfeeds.

“To me, these are food beverages – wine, beer and distilled spirits – and there’s a whole history to their consumption, but up against that, in the United States, you’ve got neo-prohibitionism; and it’s a constant battle,” Easton told me. “The first guy I ever worked for in the wine industry talked about it being a struggle between the ‘wets’ and the ‘dries,’ and that you never let your guard down, because there’s always people out there who have this puritanical attitude toward drinking.”

What Easton continues to accomplish at Plymouth’s Terre Rouge & Easton Wines shows how much vine-hung creativity grows in California. He’s cultivated a combination of farming and fermentation techniques that make his highly affordable Terre Rouge syrah a virtual trip to the Rhone Valley in France. Another result of how he harnesses soil, sunlight and oak is the Easton 2015 Old Vine Zin. It fuses zinfandel grapes from nine of the most timeworn vineyards in the Shenandoah Valley, yielding a blend that brings a sharp raspberry shot gliding over crisp, spring-inspired hints of vanilla and clove. It’s the kind of “wild wine” that Homer says drives us to sing and dance and share bold stories.

Many other personalities are throwing their talents into our region’s drinking culture. Andy Klein is brewing standout Belgian and English ales at Monk’s Cellar in Roseville. Casey Newman is distilling top-tier spirits at Dry Diggins in El Dorado Hills, and killing it with offerings like his Engine 49 straight bourbon whiskey. And Sacramento cider-master Vince Sterne keeps bringing smiles with the dry apple and stoned fruit bubbly that he pours at Two Rivers in Hollywood Park. I’m just naming a few, but the full picture of our artisans is much bigger.

There’s also no way to talk about the scene without mentioning bartenders. Crafty mixologists like Baron Stelling, Jocelyn McGregor and Jim Wakeland have helped make Sacramento a growing destination for cocktail enthusiasts.

To explain what’s in their spell book, I reached out to Nick Fedoroff, who for my money is one of the great bartenders in Northern California. In addition to mixing drinks, Fedoroff is professional magician and music producer, and he brings the same ambitious drive to every kind of illusion he conjures. He’s currently heading up a 160-year-old bar inside the Holbrooke Hotel in Grass Valley. Fedoroff first hit my radar when I tried his version of The French 75. Obsessed with cocktail history, his research indicated that the modern trend of making The French 75 in a champagne flute is a misstep. He returned to the older method of mixing it in a bigger glass with ice, changed the well gin to a juniper-forward traditional London Dry, and then enhanced the champagne-top with violette and lemon. All this makes for some cool, floral undertones that bloom into an array of citrus flavors brightening on the tongue. It’s crisp, icy, nuanced perfection. Federoff’s French 75 is even better than the ones I’ve had at Galatoires in New Orleans, which is the most lauded place for gin cocktail within the most famous city for drinking in the nation. Fedoroff says that the secret of being a good mixologist, in the end, has to do with connecting to people.

“The way I look at entertainment, whether it’s music, magic or anything on stage – and the creative drive behind those things – is that the end goal is that you’re trying to give someone an experience,” Fedoroff told me. “It’s the same with creating cocktails: You’re trying to create this experience for somebody that is so personal, that is so connective, that it feels like home.”

He added, “Alcohol has this ability, as a medium, to sort of transport somebody to somewhere else, just with a sip. You want customers to have a visceral reaction. We’re trying to get them to feel welcome, to feel relaxed – to feel safe.”

Of course, the neo-prohibitionists revel in any kind of news that invokes the opposite feeling of safe when it comes to drinking, and especially when it comes to bars. As the pandemic tapers down, they won’t want government to release its grip on the bar industry’s throat. Watch for more “news stories” about the demonic genie of alcohol being fully unbottled on an unsuspecting public by COVID. Watch for more calls to action around alcohol consumption under the guise of public health.

But will journalists tell the other side of the story? Creativity. Camaraderie. Connection. Finally, a sense of ease.

“It feels like it’s more needed than ever,” Fedoroff said of our bar scene. “Life has been in upheaval for everyone. I don’t know a single person who hasn’t had some horror story to tell. And while I’m not a proponent of escaping from your life for long periods of time, we do need those pauses in between. What I see that we’re doing is creating that ability to escape for just a moment.”

Scott Thomas Anderson is also the host of the ‘Drinkers with Writing Problems’ podcast, available on iTunes, Audible, Stitcher and Podbean.

Be the first to comment on "Editorial: In defense of pandemic drinking"