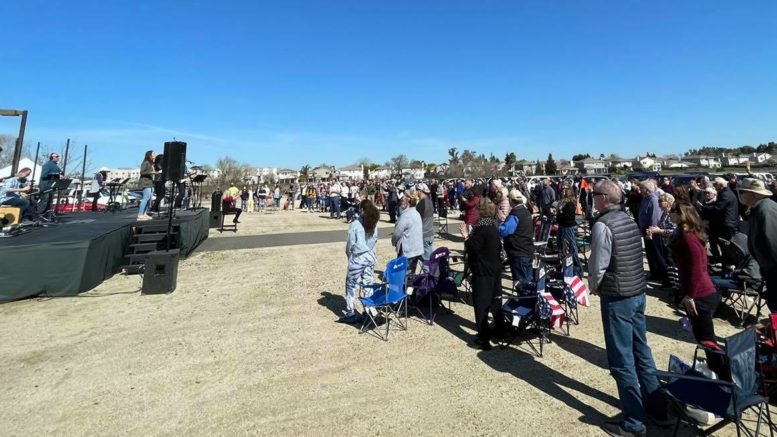 It was a momentous Sunday for the members of Creekside Christian Church, who started eagerly arriving at 8:50 a.m., ten minutes before the service started. They trooped in groups and pairs into the atrium of the building, the amused chatter of people who hadn’t seen each other in months instantly filling the room.

Families stood six feet from each other yelling out pleasantries. They bumped fists and elbows together and shared smiles from behind their masks, the hints of which were in their rising cheeks and squinting eyes. Then, they filed into the main auditorium and took their seats, carefully leaving a gap of two-to-three chairs between each family. The massive screens that hung on the wall came on, and suddenly a building that had been dead for almost a year came to life.

“Welcome back to our once-in-a-year church service,” Scott Hansen, Creekside’s senior pastor, joked. The congregation broke out in laughter.

This group last met on March 8, 2020. Three days after that, California announced its shelter-in-place orders and the church, along with everyone else, went into a long hibernation. It was now March 7 and the excitement to finally be together was palpable.

A lot went into making it possible. Members were directed to make reservations through the church’s website in order to secure a spot. What used to be a room full of 3,000 earnest members was only open to 300. Everyone had to have their masks on at all times. It was the primary requirement for admittance: no masks, no entry.

“Our auditorium has five different sets of doors and normally they’re all open,” noted Melissa Yocum, executive pastor of lifegroups. But for that Sunday, she said, the church decided to shut four of those doors and funnel members in through the main entrance. Members welcomed and dutifully complied with the new measures. They were all in anticipation of finally being able to share a space as a congregation.

“It’s changed our lives to have a year to not be able to go to church,” said Monica Quam, a four-year member of Creekside. “It’s been hard … I’m a people-person.”

Quam enjoys the exuberant chit-chat that happens before and after services, and she’s especially missed the warmth of hugs or even a simple handshake. She was also fond of the praise and worship sessions – clapping and singing along with the live band. All of that ceased with the lockdown. Instead, she had to make do with the pre-recorded sermons provided on the church’s website.

A life of faith online

The transition to online services a year ago was not easy, not for the members and least of all the church team who had to figure out how to move their entire operation online on short notice.

“Boy, that was such a surreal week,” said Jennifer Sandlin, COVID Logistics Manager. Her initial position as volunteer coordinator evolved overnight to meet the unique demands presented by the lockdown.

“My job was to hold down the fort,” she recalled. This included helping to plan the new structure of their services. It was a huge adjustment, going from having three live services to one simple virtual service. It required devising a roster: the band practiced and filmed the worship session on Tuesday nights while the pastor filmed the sermon on Thursday afternoons. The videos were then edited together between Thursday and Friday, and finally uploaded to the church’s website and YouTube channel on Saturday.

For senior members who were not tech-savvy, the sudden dependence on new tools like Zoom and YouTube live-stream was challenging. The church team was conscious of this, organizing a team of 70 volunteers to connect with seniors during the first week of lockdown. They made nearly 1,000 phone calls to seniors, teaching them how to navigate Zoom as well as the church’s website where they could watch services.

Most members watched the service on Sunday mornings at the precise time they would have been in church. Quam was particularly dedicated to this ritual and even opened her home to a small group of church members to gather and watch the sermon together.

“We’d have the worship, we’d have the sermon and it kind of led into a potluck afterward,” she said. There were 10 to 15 of them who faithfully attended these home gatherings and when they were together, they tried to recreate a sense of normalcy.

“We don’t wear masks, we hug each other. We’re pretty normal,” Quam acknowledged.

They were mostly unexposed to the virus, and as such, were able to avoid any outbreaks. These weekly meetings with like-minded people were vital in helping Quam stay centered in a time when human contact was rare.

“It has been wonderful,” Quam said.

The importance of connection

As a church, Creekside has always recognized the need for community. The simple act of fellowship, they believe, is like water to the seed of faith.

It is in keeping with that, the church founded lifegroups – a community where members pursue spiritual maturity while developing genuine relationships. There are 75 lifegroups within Creekside. Together, they boast an average of 1,000 adult members. Each group holds 12-15 members, meeting weekly at their leader’s home for sermon recaps and thought-provoking conversations about faith.

The lifegroups took on a renewed sense of purpose during the lockdown. At a time when in-person gatherings were all but illegal, and people yearned for any form of social interaction, members say these groups were a saving grace, serving as a spiritual anchor and communal.

“I believe wholeheartedly that part of the reason our church has navigated COVID as well as we have … is because we have 1,000 people in a life group,” Yocum said. “They were already connected in a small community.” And hence were able to keep each other grounded both in their faith and in their lives during the lockdown.”

Yocum’s group, which meets on Wednesday evenings, was one of the few that resumed in-person gatherings in the summer when coronavirus cases declined in California. They met outdoors in the backyard of their group leaders’ home wearing masks and observing social distancing guidelines. They watched the sermon from last Sunday and answered discussion questions that sometimes led to funny and personal revelations.

“I think if we hadn’t had that, our people would be suffering much more than they are,” Yocum said.

The welfare of members was something that worried the church team since the start of the pandemic. The isolation of lockdown was known to breed anxieties and deeper mental health issues. Creekside had always had a thriving counseling program within the church that offered services ranging from marriage to grief counseling. However, with the enactment of lockdowns, they felt something else was needed. In December 2020, pastor Hansen and his team organized a mental health panel that was live-streamed on YouTube. Over 30 members were in attendance.

“We need to normalize the fact that these are legitimate emotions in this rainbow of emotions God has given us,” Hansen said during the discussion. He went on to emphasize that faith does not grant immunity from mental disorders, and believers do not have to languish in silence if they find themselves dealing with them.

“Christians are human beings. Anxiety is a human emotion,” Hansen stressed, sharing some of his own struggles with the illness following the shutdown and the uncertainty that took hold. He said he’d been overwhelmed with “the what-if scenarios of what is going to be left of the church after COVID is done.” These worries manifested in physical symptoms like fatigue, irritability and a bad case of insomnia.

“It means a lot to me when leaders in the church can open up about what they’re struggling with,” shared Emily Pitcock, a teenage member of the church. “It helps me feel less alone.”

The issue of loneliness – that single unifying emotion of the lockdown – worked as a double-edged sword for Creekside. On one hand, it secluded members and intensified their anxieties, but on the other hand, it filled them with an ardent longing for community, which in turn kept attendance strong.

College and young adult minister Andrew Pak said that students 18-to-25-years-old continued to show up for meetings undeterred by the many inconveniences of the pandemic.

“There was a real hunger from so many students to come and engage with one another because they’ve been suffering from anxiety or loneliness,” he remembered.

When Sacramento County was first in the purple tier and COVID-19 cases were low, the group would meet in a back-parking lot of the church. They gathered around fire pits to listen to Pak preach the gospel. I saw that drive in the young people regardless of the weather conditions.

But the broader congregation had other things on their mind.

Conscious of these questions, the church launched a weekly devotional called Looking Up in order to help nurture members’ faith. Every week, one of the pastors recorded a 10-minute video and posted it to the church’s YouTube channel.

“We felt our church needed an additional opportunity to be ministered to and to have truth shared with them online,” Yocum said. These devotionals were another form of support that helped get Creekside to the point where, for first time in a year, it was able to hold holy communion as a congregation, drinking wine from small disposable cups that had the flat communion wafer on to top. During the lockdown, members had to make do with bread and grape juice from the confines of their home.

Be the first to comment on "Faith in lockdown: After navigating community strain and need for mental health support, one Elk Grove church returns to in-person services a year later"