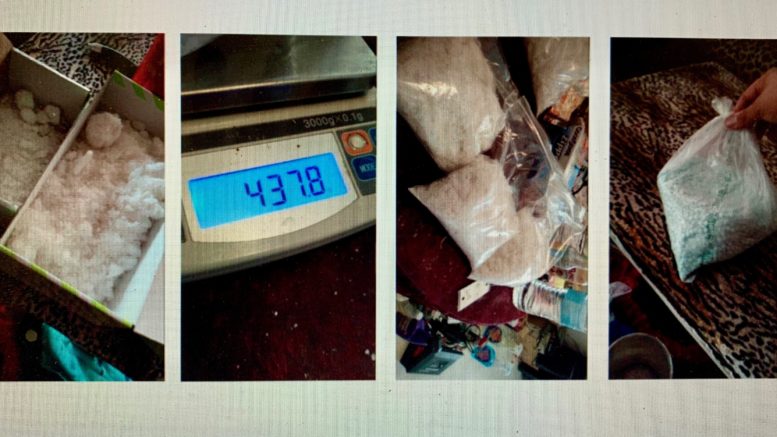 A large shipment of fentanyl and methamphetamine destined for Sacramento was intercepted in Rocklin.

More than 2,800 Californians have died of fentanyl overdoses since 2014, with a tidal wave of fatalities hitting San Francisco and Los Angeles throughout the recent lockdown. New federal indictments suggest that one Mexican drug cartel wanted to make the Sacramento area its next big market for the drug – a scheme that began to unravel in front of Rocklin’s PetSmart before collapsing altogether under the noses of several German Shepherds.

The indictments, issued at the end of February, were leveled against Daniel Melchor of Santa Ana, and Demecio Navarro Sanchez, a Mexican national. Their defense lawyers may have an uphill battle after videos on Melchor’s phone reportedly showed men firing an illegally altered assault rifle and Melchor crooning his own narcocorrido, a song from the self-mythologizing genre that treats cartel killers and traffickers as romantic outlaws.

According to a federal affidavit, the investigation began in September when an informant for the Tri County Drug Enforcement Team learned that a cartel planned to sell fentanyl disguised as oxycontin in the Sacramento area. It’s not uncommon for opiate addicts to die by unknowingly taking fentanyl that they believe is oxycontin. Fentanyl is almost twice as potent, and it’s 80 to 100 times stronger than regular morphine. Last month, Dr. Kevin Mackey, medical director for Sacramento County Fire Agencies, told KCRA that local paramedics are now responding to roughly 3.1 calls per-day for overdoses, with fentanyl appearing to be the driving force behind the health disaster.

The Tri County Drug Enforcement Team is also known as TRIDENT. It’s comprised of police officers from Citrus Heights, Rocklin and Auburn, as well as deputies from the El Dorado Sheriff’s Office, members of the California Highway Patrol and agents from Homeland Security. The team operates under the direction of the Placer County District Attorney’s Office. After discovering the cartel’s intention, TRIDENT decided to launch a joint probe with the FBI.

TRIDENT’s informant helped an undercover officer start communicating by phone with a man in Mexico. The investigator posed as a Sacramento drug dealer who wanted to buy opiates in bulk. A cell phone examination later determined the man on the other end of the line was Navarro Sanchez, according to court records.

The first drug exchange started off small. Navarro Sanchez allegedly offered to sell 2,000 pills, referring to them in coded conversation as “vitamins.”

“Before ending the call, he told the [undercover officer] he has the best stuff around with a high lasting more than four hours,” FBI Special Agent Kylie Lowe wrote in her report.

On Sept. 29, Navarro Sanchez crossed the border in a red Mitsubishi Mirage with California plates. He met the undercover officer in a parking lot in Rocklin, reportedly carrying 2,000 blue pills that were marked ‘M-30’ to appear like Oxycontin. He was handed $18,000 in cash for the supply. Lab results later confirmed the pills were actually fentanyl.

For the first two weeks of October, the undercover officer negotiated a much larger buy, one that would include 19,000 fentanyl-laced Oxy counterfeits and 40 pounds of methamphetamine. On Oct. 16, Navarro Sanchez left Mexico again on his way to Rocklin. Following in a grey Ford Mustang was Melchor, who’d joined him as a two-car caravan somewhere in South California. Both drivers arrived at the parking of Rocklin’s PetSmart on Crossing Drive at 1 p.m. later that day.

Melchor got out, met the undercover officer and then popped the Mustang’s trunk. It was allegedly loaded with vacuum-sealed bricks of pure meth. According to the affidavit, the undercover officer warned Melchor, “Don’t move anything because, just like the boss said, there are many cameras around, and we have to be careful.”

Believing they would rendezvous at a second location to finish the deal, Melchor and Navarro Sanchez both drove back onto Interstate 80. As they headed east, a Rocklin police canine-handler got behind Navarro Sanchez and flashed his patrol lights. The car pulled over onto the shoulder of the freeway near the outskirts of Loomis. A second Rocklin canine-handler soon arrived. After one of the officers had a conversation with Navarro Sanchez in Spanish, the suspect reportedly gave them permission to search his vehicle. A black German Shepherd named Condor wasted no time in locating the bounty fentanyl stashed under some carpet lining. Navarro Sanchez was arrested.

Further up the freeway, a CHP officer spotted Melchor and lit him up for speeding. He followed Melchor onto the Maple Street exit in Auburn, with the Mustang coming to a stop near the city’s giant gold miner statue.

“Melchor initially gave an incoherent response to where he was going and then stated that he was not familiar with the area, and was going to Reno, Nevada,” Lowe wrote in her report. “When asked his sister’s name, Melchor said her name was Juliet and did not respond when asked what his aunt’s name was. Melchor then began sweating profusely.”

A CHP canine-handler was called to the stop. His dog quickly alerted on the Mustang’s trunk, proving probable cause to open it and find the nearly 40 pounds of meth. Melchor was taken into custody. TRIDENT members booked more than just the meth and fentanyl into evidence, but also Melchor’s Rose Gold iPhone. According to court records, it contained photos taken in July of Melchor and another man holding an assault rifle with a ten-round magazine. Closer images of the weapon revealed it to be an untraceable “ghost gun.” Melchor’s phone reportedly had at least five videos of a group of men firing that same rifle, as well as a separate video taken in September of Melchor singing a narcocorrido – or narco ballad – about himself. The affidavit lists some of his lyrics, which translated into English, are given as:

As TRIDENT’s investigation progressed, its investigators allegedly found evidence that Melchor had been wiring money to Michoacan, Mexico.

Melchor and Navarro Sanchez were each indicted in the U.S. Eastern District Court of California on three counts of conspiring to distribute fentanyl and methamphetamine. The federal prosecutors involved in their arrests were working under U.S. Attorney McGregor Scott, who stepped down in mid-February. Speaking with reporters at the time, Scott called the fentanyl crisis in California one of the biggest challenges he had faced.

“Now it is everywhere,” Scott said. “It just takes a little, tiny amount of that drug to kill you.”