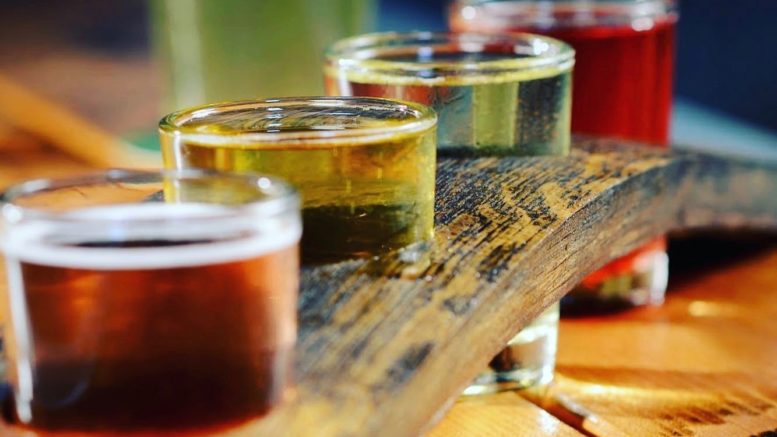 When Vince Sterne first began brewing and selling his cider to Rubicon Brewing Co., almost exactly 21 years ago, he had no idea he would be laying the foundation for the second-oldest cidery in all of California: Two Rivers Cider Company. His longevity in the cider business becomes understandable once you meet him. Sterne is a man of simple taste, with a strong affinity for booze, bikes and Volkswagen buses (all of which have a home at the Two Rivers Cider tasting room). The cidery stands on the same tucked-away corner of Hollywood Park that it did upon its opening in 1996; the tasting room opened up in 2016.

How did Two Rivers Cidery get its start?

We started off making cider here. I was a bartender at the Rubicon so it was pretty easy to get the account.

How important was Rubicon Brewing in your early days of making cider?

I kept my job at the Rubicon for eight years after I started making my own cider. I bartended and made cider because I didn’t make any money. Any profits went back [into Two Rivers], so I kept my night job. That kept me very close to the industry.

I know Rubicon is in the middle of closing down…

Yeah it’s sad. Personally, it tears me up. It was my living room for the first two decades of my journey into microbrew.

Well you’ve found a way to recreate that ‘living room’ feel here at Two Rivers. Is that what you attribute your success and longevity to?

You know, this is probably the first time I’ve been profitable in 20 years. (Laughs.) Well, not really, but it’s always been an uphill battle.

From what I heard, even the beginning was rough.

Yeah, that first [cider] line at Rubicon got pulled almost immediately. But I’ve learned a lot since then.

Have you made any other big mistakes since then?

(Laughs.) Yes. There was a fresh strawberry cider that went south on me. I was too young in my cider career to know what caused the mistake. But, we do a strawberry now. I learn from a lot of my mistakes. Thank goodness I’m only making 200 gallons at a time.

What’s your favorite cider that you’ve made?

It was one, made for a local company, called Hard Cock Cider. It was made for Cock Grease, which is a hair-product company. It consisted of a whole smoked turkey carcass.

At first it was just a lawless party, and now it’s a lawless fundraiser (Laughs.) … It started off with just a handful of friends, some coffee and some home brews in my backyard. Now it’s over a thousand people on bikes just cruising around town.

I know a couple that met on the ride and they are happily married now. Lives and hearts have been broken [on the bike ride]. I had a girlfriend who promised me, and kept her promise, that she would never do that bicycle ride with me again. I didn’t need her on the back of my tandem anymore (Laughs.) I think over the years now we’ve raised over $100,000 for charities.

Is it different charities every year?

Yeah. A lot of times, it’s subject to current social circumstances. So last year, there was a lot of social upheaval over what was happening at Standing Rock. So we sent some money to the veterans that were supporting the protesters. One of the milestones for the “Appetite Enhancement Ride” was when we took proceeds and created the Sacramento Bike Kitchen. It is a nonprofit bicycle organization providing inexpensive bikes for the community, classes to work on bikes and, for a minimal fee, a use of their tools to work on your own bicycles.

So who is the benefactor this year?

Well [the decision] kind of happens at that time. I think this year, I’d really like to do something here locally, in this neighborhood … Opening the tasting room has [offered] a great opportunity to get involved with the community and support music and the arts. Oh, and bicycles. You do get a buck off.

Is that why you have opened up artist studios here in the cidery?

Oh yeah. I don’t think the building is suitable for production. I think it’s more suited to serving the music community and the arts community. [In] over half the building, the tenants are artists or craftspeople. For me, it’s a selfish way of making me feel good, [by] giving back to my community. That’s why I’m holding a four-day festival.

Is that festival to celebrate your 21st anniversary?

Well yeah, but it’s also a reason to get my friends to show up. If they can’t show up for one day, they can show up for the others (Laughs.) We’re going to have live music, food trucks and everything. It’s going to be fun.

Be the first to comment on "Profile: Vince Sterne, founder of Two Rivers Cider Company"