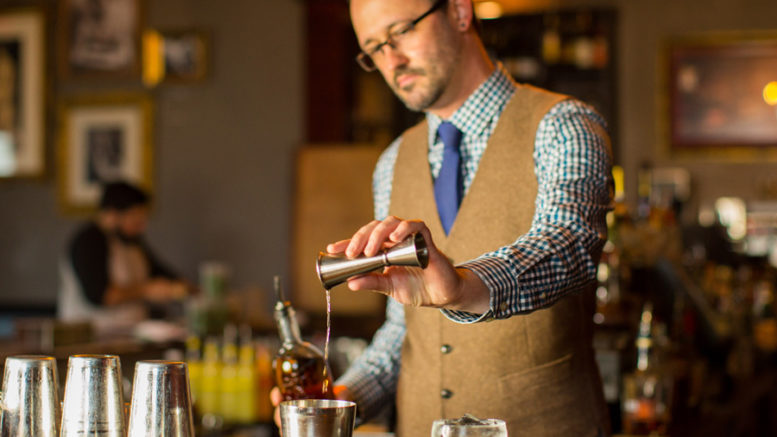 Baron Stelling says his first gin martini was life changing. During his six years behind some of Sacramento’s most popular bars including Paragary’s, the Shady Lady Saloon and now Fizz Champagne & Bubbles Bar, Stelling won a national title at 2016’s Star of the Bar Competition and continues to fuel his passion for the industry by delving into the history and science behind the vast world of craft cocktails.

“It’s really fun to see when drinks were created or popularized and see what else was going on in the area around them in that time and space,” Stelling says. “For a cocktail, when you’re drinking it, and you hear about the history, you can connect that cocktail to the place it was created.”

Stelling’s award-winning cocktail is known as the $5,000 Cocktail at Paragary’s, where he worked while competing in the Star of the Bar Competition in Chicago. His original creation had to include Jägermeister, a German digestif known for its black licorice flavor.

“I called it The Stag Savior based on the history behind Jägermeister and the brand,” he says. “It was really nice, sweet and sour. I tried to really play up the flavors that were already in Jägermeister. I wanted to make people see that it tastes good on its own merits.”

Stelling competed against bartenders from all over the country and took home first place and a $5,000 check. Nowadays, he’s behind the bar at Fizz Champagne & Bubbles Bar and the Shady Lady Saloon, the place he says “taught him how to drink.”

Stelling’s thirst for knowledge has also sent him to Kentucky, where he toured Wild Turkey’s distillery as a part of its Behind the Barrel program where bartenders go behind the scenes of one of America’s oldest bourbon distillers.

“It was a really amazing educational opportunity. You get to visit a cooperage where they make the barrels, you get to go into the rickhouses where they’re aging all their whiskey,” Stelling says. “It’s a full tour of the distillery where you see all the stills and components of it.”

So what’s next on the horizon for one of Sacramento’s best bartenders? He’s headed back to school to learn all about food science by taking organic chemistry to further his understanding of how aging spirits work, how distillation works and all of the “fun, science-y stuff” that he finds purely fascinating.

He also has a new cocktail out on Shady Lady’s current menu, the Pretty in Pink.

“It’s a combination of hibiscus-infused gin, cognac, with a little bit of grenadine, lemon juice and bitters,” he says. “It’s really, really nice. Really bright. Really seasonal. I think the combination of the hibiscus-fruity gin with the cognac ties it really well together.”

Be the first to comment on "Profile: Baron Stelling, best bartender"