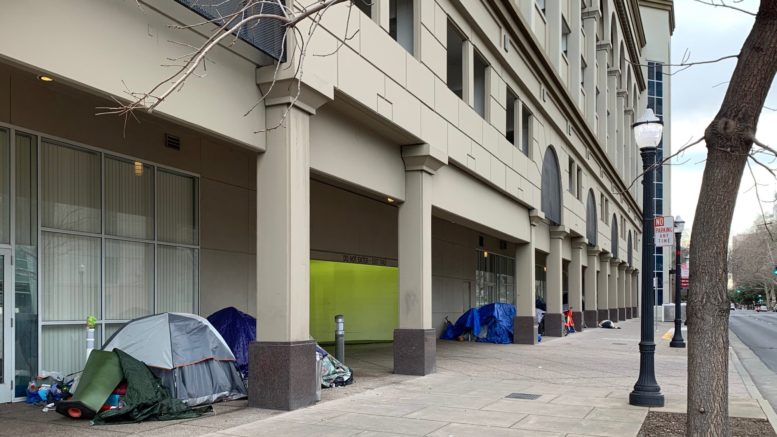 Tents line I Street across from Caesar Chavez Plaza.

We are in a familiar place. More deaths of people on our streets. More die-ins and press conferences being staged. More candlelight vigils. More suffering. Our history repeating itself. But what if, instead, more housing? More just policymaking? It has long been a question in front of us, though sometimes it’s hard to identify and answer in the cacophony of “HUD Dollars, HEAP Dollars, HHAP Dollars, and who deserves what, and for how long, and in what neighborhood it can absolutely not belong?”

But the broader question remains, reminding us that we can and should do better by those facing housing insecurity or living outside. Rest in peace, John Lain, 63, who passed away this weekend in Cesar Chavez Plaza. May we learn from your transcendence.

There has been much blame thrown about and very little responsibility taken by both those in power and those with power. I am not referencing the events and discourse of the last month, which have been heartbreaking, enraging, and narrative-shifting in nature. I am referencing years of harm, years of broken promises, years of blame, and years of a choice.

Though the last month has had its share of all that as well, it has opened the eyes of many to the humanity of our neighbors living outside, amidst this close attention paid to each life that is lost. We need to go a step further and consider the conditions that have led to the shocking disparity in life expectancy for those who live outside.

I am asking us to examine the systems of organized violence, of institutional and structural racism and ableism, and the commodification of basic needs — namely housing and healthcare — that set our situation in motion and continue to determine outcomes. When we say housing and healthcare should be human rights, we know it’s also a racial justice issue, a climate justice issue, a disability justice issue, and of course, an economic justice issue. Many in the field, and those living outside, have attempted to raise the alarm that homelessness was a public health crisis long before the pandemic.

We have left people behind. We have left them on the street to fend for themselves and die trying. Those people have been disproportionately Black, Native, and disabled. And for years Sacramento has largely been okay with this. The short-term, heavily means-tested, punitive, top-down – and often market-based – strategies to address homelessness have not worked. They have caused harm to our community members attempting to access those resources. This is not to say that there haven’t been individual successes or programs and frontline workers that are caring, committed, and do what they can every day. There are. There have been.

But our emergency homeless response system is not easily accessible. It bottlenecks easily and churns people out more rapidly than it brings them. It also relies heavily on law enforcement, whose dual role as enforcer of a torturous policy of displacement, and as a service-provider, is a recipe for mistrust, coercion, and harm.

Even the recent and widely-praised homelessness master plan is only aiming to address only a small percentage of the overall population of those living outside. And after spending tens of millions of dollars of state funding on a shelter crisis, we are left without an increase in shelter beds.

No wonder there is outrage. It is why I’m asking for us to address our own complicity, even if passive, and to dare to dream of and demand an entirely different way forward. As member of Sacramento Homeless Organizing Committee since 2013, I have learned we must advocate for a way forward that prioritizes the dignity, perspectives, and self-determination of those experiencing the most acute impact of the problem.

Recognizing that this is not yet accomplished, we carry on. And we’re carrying on. We carry on for those we’ve lost, for the two dozen that I personally did not have the chance to say goodbye to, with almost 600 officially counted in the last five years. For their families. For Courtney Collins, whose father Vinny passed away outside City Hall in 2017. She flew in from North Carolina to call for justice and change. The City gave condolences, just promises out of one side of their mouth while banning sleeping at City Hall out of the other. We carry on and dream and demand and build differently for those still with us. As Mayor Steinberg said about the MLS stadium loss, with his own entirely different goals in mind, “We have only begun to fight for what our City deserves.”

We’re fighting, too. Fight with us.

1 Comment on "Essay: More death on the streets, more avoiding the harder questions"