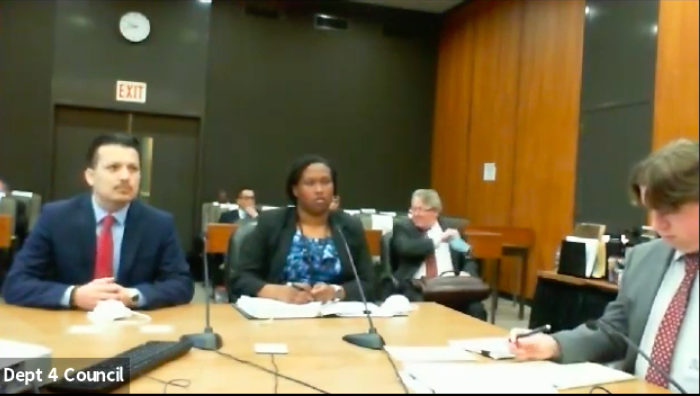 From left, deputy city attorneys Emilio Camacho and Fhanysha Gaddis and a public defender await a ruling on a motion to turn over police personnel records.

The city of Sacramento failed on Friday to prevent a judge from turning over a police officer’s internal investigations file to a man who claims his 2018 arrest during a traffic stop was racially motivated.

That file shows the officer broke a Latino man’s arm during an arrest last year, after the officer and two others stopped the man for riding a bicycle at night without a light.

With protests still continuing more than three weeks after a video showed a police officer asphyxiating George Floyd in Minneapolis, the June 12 hearing in Sacramento Superior Court underscored just what is considered releasable when it comes to officer misconduct and what remains shielded by state law.

Defendant Adam R. Rios was first arraigned in September 2018 on counts of driving under the influence and possession of drug paraphernalia. He currently faces four misdemeanor counts in a case that has limped along for nearly two years through continuances, a couple failures to appear, a second arraignment and reset trial dates.

According to Shouse California Law Group, a Pitchess motion is “a defendant’s request to inspect a law enforcement officer’s personnel file for evidence of police misconduct” in California. “Defense attorneys typically bring a Pitchess motion as part of the pretrial process when they suspect officers may have acted improperly, such as filing a false police report [or] using excessive force,” the law firm states on its website.

Senate Bill 1421 expanded the public’s access to certain peace officer records last year, making Pitchess motions unnecessary in cases where an officer fires a gun at someone or uses physical force, or has committed a prior sexual assault or a dishonest act such as perjury or falsifying a report.

But California defense attorneys still need to file Pitchess motions if they want access to personnel records documenting other types of misconduct, such as racial profiling or coerced confessions.

At last week’s hearing, Edward Richter, Rios’ public defender, insisted his client was innocent and said the Pitchess motion was based on their claim that the arresting officer “committed misconduct in the form of committing a racially pretextual stop of this defendant and then lied about it in his police report.”

Richter added that a second officer then “essentially covered” for the first officer by also filing a false police report.

Neither Rios nor the prosecutor attended the hearing, with Judge Geoffrey A. Goodman saying of the Sacramento County District Attorney’s Office, “They don’t have a dog in this fight, so to speak.” Arguing against defense counsel’s motion were two Sacramento city attorneys.

“On behalf of the city, our position is that the cause [for the Pitchess motion] is not [valid] because … the officer did not have any misconduct,” deputy city attorney Fhanysha Gaddis told the judge.

“You would agree the officer in this case is a material witness, correct?” Judge Goodman responded.

“And you would agree that the district attorney notified defense that there may be Brady material in the records as well. You acknowledge that as well?” Goodman said.

“I acknowledge that as well,” Gaddis said.

After a 36-minute recess so the judge could review records in private, Goodman ruled that the defense counsel had made the case with the arresting officer, but not the second officer. He ordered the city to provide records of an internal affairs investigation for “Officer Tersteege,” under seal and a protective order that prevents attorneys from disclosing the details outside of this specific case.

Zachariah Tersteege joined the Police Department in 2014, according to the public employee database Transparent California.

Six months after he pulled over Rios, Tersteege and two other officers were the subjects of an internal investigation for a March 2019 use of force incident that resulted in “great bodily injury” to a Hispanic man, according to records released by the Sacramento Police Department under SB 1421.

Cleared for breaking an arm, reprimanded for swearing

According to their police reports, officers Jeffrey Dahl, Bethanie Dales and Tersteege stopped the man for riding a bicycle at night without a light on Rio Linda Boulevard. The man told officers he was trying to get home for his birthday, stepped off the bicycle and began to back away when Dahl informed the man he was going to search him for weapons, Dales wrote in her report.

Tersteege and Dahl then grabbed the man and the three officers wrestled him to the ground. At some point, Tersteege placed “a control hold” on the man’s right arm, causing it to break. Dales wrote that the man complained of pain to his right shoulder and said that his arm was broken, and that she saw his right elbow swell after his arrest.

An investigation found that the suspect suffered a bone fracture to his right arm and abrasions to his head and body.

Officers found two glass pipes and a small bag containing what was later determined to be amphetamines.

An internal affairs investigation deemed the officers’ use of force justifiable and only found minor fault with Tersteege swearing during the physical encounter.

“Ofc. Tersteege uses profanity on a number of instances where the audio is captured on video,” wrote a lieutenant who reviewed body-worn camera footage of the incident. “I believe the ancillary issue of the use of profanity by Ofc. Tersteege was addressed appropriately at the watch level by Sgt. Magny.”

According to the California Department of Justice, peace officers in California used physical force 679 times in 2018, the most recent year for which data was available. Control holds and takedowns represented nearly 17% of the type of force applied, choke holds accounted for 5.4% and discharging a firearm accounted for 41.5%.

The largest proportion of people affected by that force—at 46.7%—were identified as Hispanic.