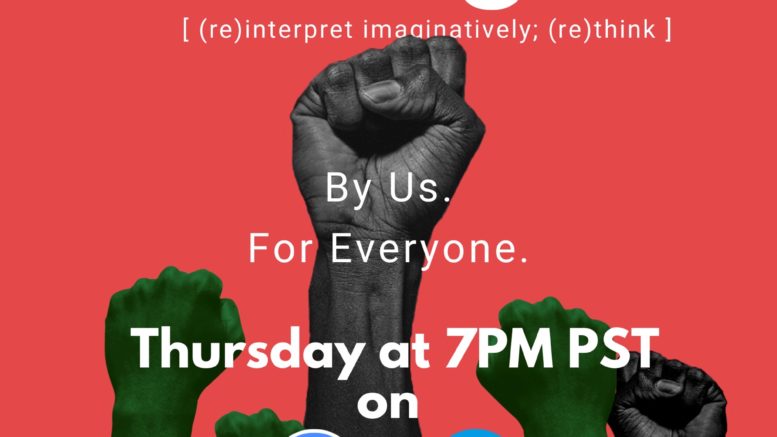 Each Thursday night since July, B Street Theatre at the Sofia has hosted the virtual event Re-Imagine, with the tagline “By Us. For Everyone.” The event—currently virtual but with intent to be on the stage post-pandemic—highlights performers and artists of color.

Jerry Montoya, B Street Theatre’s executive producer, explains the tagline: “It’s by us, by people of color, but intended for a wide audience, for everyone. And because it’s about promoting artistic voices that have basically not had access to a wide audience. And so we began to provide it.”

Re-Imagine is an integral part of the B Street Theatre’s efforts toward to equity, diversity and community inclusion. Though inclusion has long been a programming goal, Latrice Madkins stepped into the role as the initiative’s director and occasional Re-Imagine host in July to more formally address the theater’s commitment to an anti-racist philosophy.

“We are able to bring in an audience from all over the globe,” Madkins explains. “Not just for Re-Imagine…but…to be able to have a Black and Indigenous People of Color audience nationwide during a pandemic and on a virtual platform is just a great feat.”

The online platform allows the inclusion of performers from outside the region, including Re-Imagine host Danielle Moné Truitt, a Sacramentan now in New York filming a role for the upcoming series Law & Order: Organized Crime.

“Through Re-Imagine I have had the opportunity to bring in my community of colleagues and friends that are extraordinarily talented and sometimes overlooked and passed over,” Truitt says. “I’m really happy that I can offer Re-Imagine as a place of affirmation for these artists.”

Each weekly program is unique, and structure can vary from musical performance to poetry to more traditional theatrical performances. Though all performances are available live on Zoom, they are also archived on Facebook for a week following each performance.

“There’s a tapestry of America, and of stories that we all grew up hearing,” Montoya says. “Black stories, Latin stories and Asian American [stories] and down the list, have been left out of that tapestry. And so we’re hoping to basically add those squares.”

He says that while most people know about Lewis and Clark exploring the American West and the Civil War battle of Gettysburg, “where are the stories that actually uplift and include the contributions of people of color?”

“And that’s really the goal—to include our voices in the American story.”

This evening’s performance, a reading of White Room by playwright Kevin Neighbors, begins at 7 p.m.

Be the first to comment on "By people of color, for everyone"