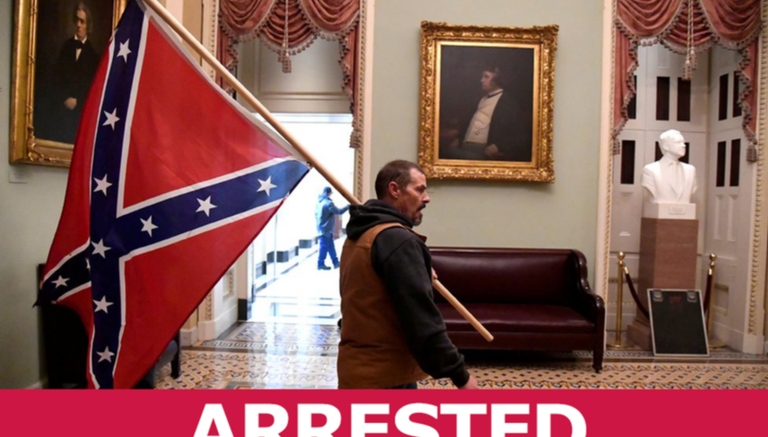 Kevin Seefried carried a Confederate flag inside Capitol Hill. A week later, he surrendered to the FBI.

With President-elect Joe Biden’s inauguration just days away, state and federal authorities are chasing rumors that armed right-wing extremists plan to descend on every state capitol this weekend.

Sean Ragan, the special agent in charge of the FBI’s Sacramento field office, told SN&R on Friday that his office has received “general threat streams” regarding the California State Capitol heading into this weekend and into Inauguration Day, but no specific threats involving specific targets or individuals.

“There’s been terminology used about ‘storming’ the capitols. I don’t know what that exactly means,” Ragan said. “But again, nothing specific, nothing that I would say is articulable in terms of a specific threat.”

It’s been an investigative whirlwind since the infamous events of Jan. 6, when President Donald Trump encouraged a horde of armed supporters to maraud the halls of Congress in a deadly and ultimately failed attempt to stop the certification of his opponent’s election.

Five deaths—including the police shooting of a female member of the mob and the fatal bludgeoning of a Capitol police officer—have been attributed to last week’s chaotic siege on the U.S. Capitol, while Trump was impeached on Wednesday for a second time, making him the only president in American history to earn that ignominious distinction.

Meanwhile, the U.S. Capitol Police Department is investigating a dozen officers for their conduct during the insurrection, including one officer who took selfies with members of the mob and another who allegedly told them where to go.

The FBI’s Washington D.C. field office is heading the investigation into the various crimes that occurred and passing leads that require follow-up to 55 separate field offices around the country, Ragan said in a phone interview.

“They’ve been working 24-seven since then to identify people that are responsible for the violence,” the agent added. “The other part of it is trying to figure out, [are] there any credible threats of violence or other criminal activity associated to last week’s events that could occur either in D.C. or here, obviously, in Sacramento.”

So far, no specific threats have been uncovered, Ragan said. But state and local officials are on high alert.

She was not alone. Just before she spoke, another woman threatened California lawmakers.

“17 million guns were purchased in the United States [by] first time gun owners…what do you think they’re gonna do with it?” pic.twitter.com/BjYyj21v0h

Gov. Gavin Newsom this week summoned 1,000 National Guard troops, while the California Highway Patrol revoked the permit it issued for a pro-Trump event on Capitol grounds and has been put on tactical alert by its commissioner.

The Sacramento Police Department promised a large security presence outside the Capitol this weekend and said it was coordinating with the CHP and Sacramento County Sheriff’s Office, while District Attorney Anne Marie Schubert released a statement Friday saying her office would prosecute lawless actors to the fullest extent of the law.

“The violence, riots and insurrection at our Nation’s Capitol were despicable and an assault on our democracy,” Schubert’s statement read. “Those criminal acts will not be tolerated at our State Capitol or at any other place in Sacramento County.”

As of Jan. 16, the U.S. Justice Department had charged 54 people in connection with the riot at the Capitol, including two off-duty police officers from Virginia and a retired firefighter from Pennsylvania.

Sacramento County Sheriff Scott Jones told CBS 13 this week that some of his deputies attended the rally in Washington, D.C., and is looking into whether they participated in the insurrection.

A California man was the latest person to be charged. The U.S. Attorney’s Office says Hunter Allen Ehmke, 20, of Glendora smashed a window that led to an office space inside the Capitol. While Capitol police officers detained Ehmke at the scene, they let him go when the unruly mob began threatening them, federal prosecutors say.

Ragan said it was too soon to assess whether a mass online purge of extremist voices—including the permanent ban Twitter issued to Trump—has made it more difficult to gather intelligence. Facebook and Twitter deleted thousands of users associated with white supremacist groups, right-wing militias and the incoherent QAnon conspiracy, which argues that elite Democrats drink the blood of children.

Telegram on how its number of users exploded after various social media platforms purged extremist voices. I admit I recently saw a very pro-Trump relative pop up in my contacts and thought 🤔 could it be? pic.twitter.com/t6ji86vFqh

But even before the online exodus, Ragan said his office’s agents were more likely to receive information about online plots than they were to monitor those channels themselves.

Ragan encouraged the public to keep providing information about criminal plots and activity.

“We want to prevent harm and we want to prevent loss of life most especially,” Ragan said. “So yeah, we definitely need help from the public. … If we don’t get those tips, then we’re really not going to be very successful in preventing that type of harm.”

Asked how this moment in time compared to the inauguration of Trump four years ago, Ragan said he couldn’t think of a parallel.

“I can’t remember … this type of activity, this type of environment occurring since I’ve been in the FBI or since I’ve just been a cognizant member of society and the community,” Sacramento’s lead agent said. “So I do believe it’s unique.”

How to make progress in the next four years

Be the first to comment on "Will Sacramento see a confederacy of traitors?"