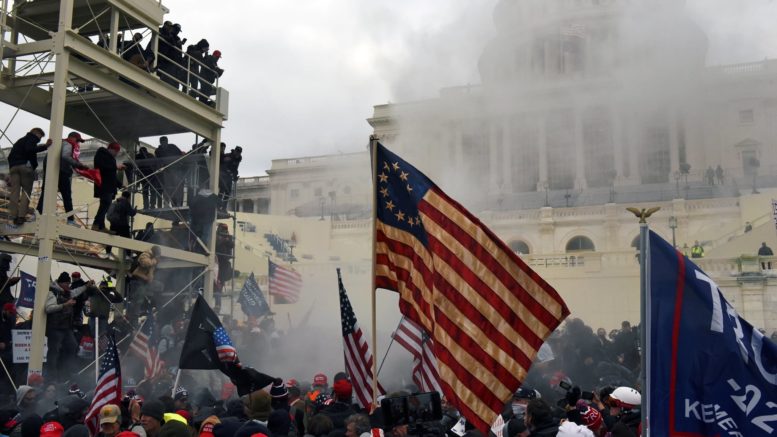 Jan. 6, 2021—yet another day of the the Trump presidency that will live in infamy

A belligerent Trump mob invaded the U.S. Capitol Wednesday to terrorize elected officials and derail one of the most essential cornerstones of American democracy—the peaceful transition of power.

At least four people died in connection to the lawless, pathetically misguided blitz on Congress, where roving crowds of extremists occupied the Capitol for several hours, delaying but not stopping Joe Biden’s electoral coronation as the next president.

Here’s how current and former SN&R staffers reacted on social media to the Jan. 6 Electoral College certification process devolving into a gross—but utterly predictable—display of chaos.

It looks like a long, ugly and crazy day in Congress for certification of #ElectoralCollege victory by @JoeBiden as @realDonaldTrump and his minions attack our democracy once again. https://t.co/Xf9R3tiSHp

After mentioning bomb threats at CA State Capitol, moderator says “exciting things” also happening at U.S. Capitol, in reference to attempted insurrection? Anyway, is it weird to anyone else to see both an Xmas tree *and* an election conspiracy crowd this late into January? pic.twitter.com/uYG3AHNBK6

One of California’s most powerful Republicans, state Sen. Shannon Grove, posted a tweet blaming antifa for today’s insurrection at the U.S. Capitol.

From my German cousin. Germany—Germany!—is like: Wir haven’t seen this scheisse before.

(My Deutsch is a little rusty.) pic.twitter.com/AxkbiPg2xv

After President Trump released a video message praising the insurrectionists:

Honestly, he just made it worse.

The 2020s are two for two on the “starting the year with unprecedented events” front. Is there a precedent for that?

Congress to resume #ElectoralCollege count tonight. @GOPLeader McCarthy called the assault on the Capitol ‘unacceptable and un-American.’ But will he continue with the objections on behalf of @realDonaldTrump who incited the #insurrection ?

They haven’t discovered fire yet? Gonna be a long evolutionary period. https://t.co/14QOQNxN0A

You can hear a woman in the video double down with, “Yeah, traitors get the noose.” Wonder what great American shame she’s recalling. https://t.co/ESLg2s9iFS

Even after the assault on Capitol, Sen. @HawleyMO still objects to #Pennsylvania #ElectoralCollege vote during the debate on #Arizona. He tries to separate himself from the #insurrection and decries violence but it’s too late.

It only required one house to reject objection but US House also voted against #Arizona challenge. Even after the #insurrection at the Capitol, 120-plus Republicans still voted to overturn the election of @JoeBiden

No participation trophies tonight. If you didn’t take an at-bat when the game counted, no free pizza either. Get your ass out of this Round Table.

Made it through another day of dry January but if they invoke the 25th Amendment I’m doing shots.

Meanwhile, @DorisMatsui is among the Democrats calling for @realDonaldTrump to be removed from office through #25thAmendmentNow

.@JoeBiden says #BLM protestors would have been treated far differently than #MAGA rioters who stormed the #USCapitol and, introducing his Attorney General nominee, reminds that @TheJusticeDept was founded to enforce civil rights laws and fight the #KKK after the Civil War.

In the sober light of day, I still don’t know if I’m more surprised that a belligerent Trump mob invaded the U.S. Capitol or that Democrats won the Georgia Senate seats—and what that says about how I see the country right now.

Be the first to comment on "American idiots staged an insurrection. The reviews were terrible."