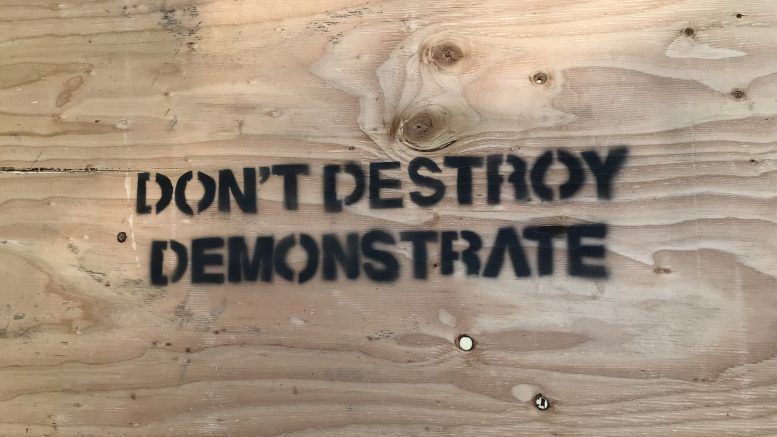 Businesses in downtown Sacramento boarded up windows, with a message. (Photo by Foon Rhee)

Re: “The right response to George Floyd” by Katie Valenzuela (Essay, June 4):

As a business owner in Sacramento who had to hold looters at gunpoint Saturday and Sunday night, I am absolutely against the cancellation of a curfew and removal of the National Guard. This is the absolute wrong approach to the problem.

We all know and understand that the protestors are not the ones looting or causing crime. We absolutely support the protestors and we absolutely support the need for significant change. You are an incoming City Council member, so the question that you would be getting from me is what I am asking current city leadership: How are you going to protect innocent residential and business establishments? The ultimate result from inaction by you and city leadership to address the core issues of all of this will drive every business out of midtown and downtown. The residents will leave as well. Then you will have a shell of abandoned buildings that will create a blight like you have never seen before.

Exactly. He has no clue of what he’s doing or the impact of his words. He’s just a simple buffoon.

Why not do away with all fines and fees for poor people? Governments could say at what figure of gross income per year does a person become un-poor.

Why isn’t America a nation in mourning? Maybe because when avian bird flu broke out a decade ago, which so far had even more deaths, there was nary a peep in the media about it? And maybe because people have begun to learn that even in a normal flu season, tens of thousands of deaths happen, nearly all among the elderly or those with compromised immune systems?

Be the first to comment on "Letters: George Floyd protests, COVID-19, etc."